The Tomato Plants Didn’t Work Out

It still beats knocking my head over a leaky basement. 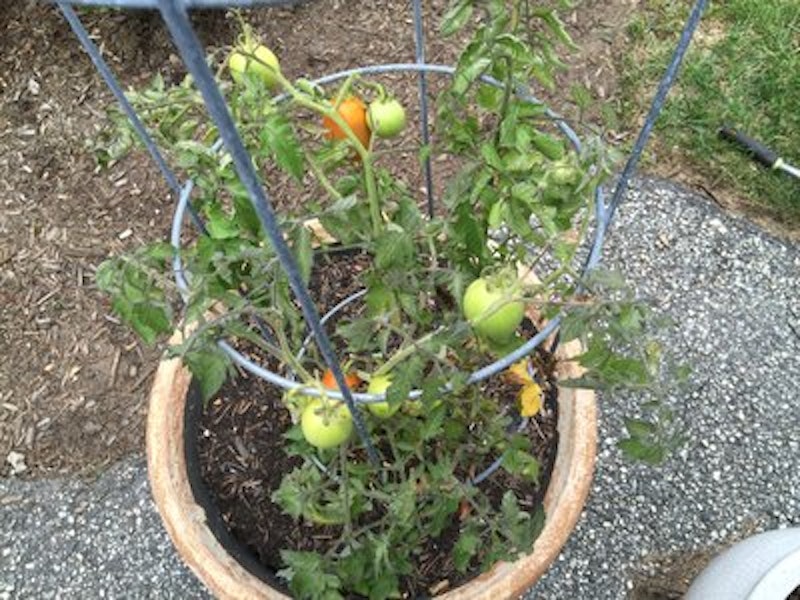 The picture above—a rather pathetic tomato plant that sits on the edge of our driveway—will be addressed shortly, but first some domestic news. Two days ago, I was on a step ladder changing a lightbulb (one of those energy-efficient jobs that’s supposed to last two years, but never does) when my wife Melissa walked through the back door. She smiled, and said, “There’s my handy, strong man getting his hands dirty.” A joke, of course, since my skills in the fix-it-up arena are nearly nil, although superior to both of my sons, and that’s obviously a moral victory. Kind of like when the Red Sox win a game this season.

We live in a North Baltimore house that was built a year before the Great Depression began, and along with benevolent ghosts that hoot in an attic I’ve never climbed into, there are all sorts of mysteries that tax my imagination. A closet that’s so shallow, just one of my suits (as if people wear such garb anymore), fills it. And there’s the light on the second floor that has no switch, no outlet, and has to be turned on and off manually. It’s baffled even the experts at Fitz Mechanical, a splendid firm that we call far too often—at least that’s what my wallet says. Our unfinished basement is a dump: used for the washer and dryer, storage space for books I’ll never read again—the choice titles are in bookshelves scattered around the rest of the house—and a number of utility rooms that are completely useless. There’s a broken-down bathroom that I haven’t entered in 10 years; a “refuse room” for all the boxes and dry garbage that gets picked up by the junkman twice a year; and a pair of ersatz bomb shelters that contain paint cans from 1959, as well as broken-down plumbing.

And that’s where Desmond—a Roto-Rooter fellow on call—and I bonded two weeks ago. As noted, I can barely handle a screwdriver—my eyes are too far gone at this point—but certainly can recognize pools of water accumulating in pockets of the basement. For nearly a month, I dutifully—twice a day—used a pump to accumulate the grungy liquid, and tried to figure out where the heck it was coming from. Finally, I connected the use of the air-conditioning units to the spills—a practical use for the old noggin—and cringed upon inspecting a few pipes that disintegrated at the touch. And that’s where Desmond came in—he arrived, took one look at the situation, let out an exasperated groan and went back and forth to his truck to find replacements. No dice, so he motored out to a Home Depot, which was chewing up my clock, and upon his return an hour later it took just minutes to affix a plastic pipe to where the FDR-era original had been. And presto, no more mini-floods, even during a few ferocious, electricity-threatening thunderstorms we’ve had recently.

I was delighted, although that feeling was rather muted when, just before leaving the house, I hoisted a Deer Park five-gallon tub of water to the cooler, and tweaked a muscle in my lower back that made it painful to bend over for several days. My son Nicky said, “Dad, just text me when the water’s empty and I’ll do it,” a gentlemanly offer, but not feasible since he lives downtown. Perhaps I should just exercise my white male privilege and hire a butler to be on call for that specific duty. Kidding!

Digression complete, I’ll return to our tomato plant. I’m not a gardener by trade or hobby (although I did serve as a gopher to my brother Doug in ’72 when he fashioned a bountiful plot of vegetables at my mom’s house near Trenton) but last Mother’s Day, thinking of a gift for Melissa, I caucused with younger son Booker and suggested some pots of herbs for the back stoop. He was dubious, citing his mom’s black thumb, but lacking a better idea, he relented. As it happened, Melissa was quite pleased with the presentation—and gave me the opportunity to razz Booker with an “Up your nose with a rubber hose, Buster!”—and the following weekend we upped the ante with three tomato plants, one hot pepper tray and a blueberry bush. It was clear from the get-go that this endeavor, while intellectually uplifting, wouldn’t pan out. The plants did grow, producing small heirloom tomatoes, but just when one was ready to possibly eat, a squirrel nabbed it instead. We never did have any sort of harvest—just one sad pepper, the blueberries eaten by birds—even though I still water the plants each day, although since it’s September that’s a waste of time.

But this out-of-the-blue foray was not without its benefits. Spending more time in the backyard, we noticed a fearless rabbit—dubbed Baby Pepsi—who grazed on the grass and, unlike his brethren who scamper away at the sound or sight of a person, he stood his ground and kept nibbling until he’d had his fill. Baby Pepsi doesn’t at all like the grounds crew that arrives every Friday to mow the lawn and spruce up the property, and so he migrates next door, but inevitably comes back. I’ve no idea whether rabbits take off for parts unknown during the winter, but if so, hope he returns next spring when we’re planning a monumental and proper tomato garden. Sandwich filling! Fresh marinara sauce! Blackberries till my mouth is stained for days on end! Yes, I agree that prediction is squarely in Panglossian territory, but it beats thinking about the cracks in the basement walls that I’ll have to fork over several grand to fix after the next hurricane strikes.