An old coot talks around politics with his sons. 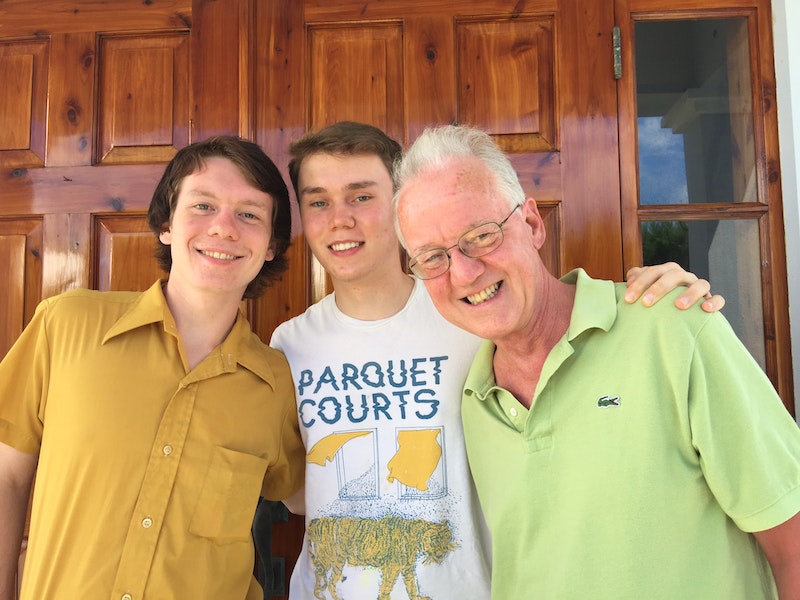 Unlike a lot of families, my own doesn’t get too antagonistic on the subject of politics. That’s not to say we don’t discuss, argue, speculate and blow smoke during an election cycle, but when a topic’s exhausted, we retreat to neutral corners. I didn’t watch the GOP debate on Wednesday night—instead tuning into a meaningless ballgame between the Red Sox and Orioles, and let me say that seeing Dustin Pedroia going bridge twice was a lot more satisfying than the CNN ratings-bonanza—but during commercials I checked the jammed Twitter feed and learned almost nothing. My son Nicky—on the left in the picture above, with his brother Booker in the center, flanked by their far less youthful dad—watched the entire charade, and texted me later that he thought Trump was the clear winner.

Now, that’s a biased view, since Nicky, 22, a Bernie supporter, revels in the ongoing spectacle of Trump completely upending the Republican marathon, and (temporarily) destroying the Party in the process. Yesterday, around noon, I saw Nick and he reiterated the Trump boosterism, but said that Jeb Bush is the likely nominee. I couldn’t really listen to this nonsense—at least in my view; Jeb’s roadkill, a softie who doesn’t know the difference between going for the jugular and hopping into a Jaguar—so I waved him off and said, “Mush, get to work!” My boy’s a good egg and wasn’t offended. But I will say this in his defense: Nicky wrote an article earlier in the summer comparing Trump’s vile tour of the USA to pro wrestling, a now-common trope that he beat the curve on.

Otherwise, my wife Melissa, who’d rather read a book on obscure insects than even think about politics, was upstairs painting, and Booker was weighed down by college studies. (The following morning he was more distressed that the Astros are blowing the AL West than anything that happened in the show-biz world.) Neither of them has fully engaged in the presidential race—waiting until it’s more than mere entertainment—and I’ve no idea who they’ll pull for, but it won’t be Hillary, Sanders, Trump, Cruz or Fiorina. (By the way, here’s an example of the absurd lengths reporters and TV personalities descend to in an effort to keep the show exciting: Fiorina was declared the “winner” by many because she nailed Trump when he tried to make up for previously saying the failed CA Senate candidate looked like an old bag. Okay, good for her, but that doesn’t make up for the disqualifying private sector baggage that’s a monkey on her back.)

I’ve often wondered this summer how my mom, dad, and brothers Jeff and Doug—all deceased—would react to this very strange election. My father, who, upon reaching voting age, voted for Wilkie, Dewey twice, Ike twice, Nixon, Goldwater and Nixon again (his last election) would likely back Bush at this point. He was a stalwart Republican. Mom was far more idiosyncratic: she voted against FDR twice (saying he lied about America entering WWII), but in ’48 went off the cliff, casting her ballot for socialist Norman Thomas. She then went with Ike, Nixon, Goldwater, Nixon, and in ’72, just months after my dad died, voted for McGovern. And then back to the GOP and Ford in ’76, with her final vote going to Reagan in 1980. I wasn’t born yet in ’48, so maybe the Thomas vote was a self-concocted legend, but as she was a world-class eccentric, I tend to believe that account.

My brother Jeff passed away three years ago, but I still, maybe two times a week, unconsciously pick up my phone to discuss the latest political uproar, only to sadly realize that’s no longer possible. Jeff loved politics, loved the hubbub, the scandals, the buffoonery, and he’d have had a ball yukking it up over Trump’s antics. Doug, who left us in ’99, was an ultra-liberal, so there’s no doubt he’d be out in California working for Bernie Sanders. One of our last conversations, at Thanksgiving the year he died, was about George Bush—who I’d been pushing in my New York Press column—and what an evil motherfucker he was. Exact words.

As for me, I’ve no clue what candidates will face off a year from November. Anyone who claims they know the answer to that question is hyper-partisan, a fool or pulling your leg. But I do hope this Trump bad business will peter out, and a reasonable candidate like Kasich or Rubio takes the nomination.