Sailing on the Italian Riviera was a breeze. 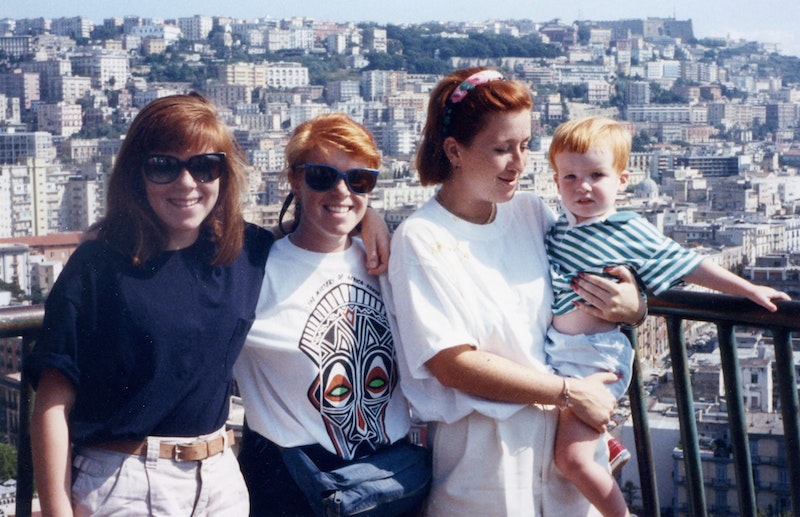 Born into a relatively large family—seven of us—60 years ago, I recall the mostly peppy reunions (I’m skipping funerals and memorial services) we’ve had since my four brothers and I reached the age of majority. The ranks have swollen over the years—in Bermuda two years ago the head count was around 40—but on one specific soiree in 1989, and the longest one at 12 days, there were 16 of us commodiously quartered on a ritzy yacht, sailing around the Italian Riviera. The picture above—my nieces Zoe, Jenny, Traie and nephew Quinn—was taken atop an historical site in Naples, just a half hour before I had perhaps the best pizza of my life. Which is saying something if you grew up in the Tri-State area.

The timing was fortuitous: my weekly newspaper New York Press had just moved offices from Spring St. to the Puck Building in Lower Manhattan, taking over Spy magazine’s space, and I completely missed, to the chagrin of colleagues, the renovations necessary to spiff up the headquarters. While Phyllis Orrick and Michael Gentile were at the helm, trading floppy discs and utilizing a printer the size of a refrigerator, I flew to Nice, where I was picked up at the airport by longtime friends Alan Hirsch and his wife Dina, and we immediately set off for lunch at a one-star Michelin restaurant, before returning to the house they’d rented for a month in nearby Seillans. It was a lovely spread, and had a garage/caretaker’s house that was generously outfitted for guests. The next night we drove to another celebrated restaurant, and if the ride home after a four-hour meal was a bit treacherous—a combo of vino and daredevil back roads with hairpin turns every two minutes—it was an outstanding first stop before meeting my family in Monaco. (Traie and I, lickety-spit, hit the casino, trying, without success, to replicate our winning streak two years earlier in Cairo.)

Despite the length of the trip—and a dozen days, much of it spent in close quarters, can lead to occasional frayed nerves—it was quite frenetic and joyous, and for those of us not architecturally-inclined, visits to, say, the ruins of Pompeii, to name just one vegetable portion, were the price to pay for very long, laugh-filled and luxurious lunches and dinners at top restaurants in Capri, Pisa and Positano (there were other towns that are now lost in my brain; perhaps they’ll re-surface when I do a Daffy Duck 15 years from now, if that’s the Lord’s will). As was customary, my brother Jeff took charge of ordering the wines, and often chose a dizzying area of fish, pasta, meats and whatever regional specialties were on offer, while sister-in-law Kathy and my brother Randy mapped out the razzle-dazzle itinerary. One of the highlights for me was docking near Naples, a really scuzzy port that was populated by gypsies, men with nothing good on their minds, hustlers and pickpockets, an area that was specifically not recommended in the guidebooks. I found it all fascinating, although did get a mild scolding when taking a few of my nieces along for a tour of the rotting, and utterly fantastic, locale.

One morning, the captain warned the elders on board that we were in for a rough six-hour sail, choppy waters due to squalls, and we’d best be prepared. The ship’s crew prepped for the ride, removing heavy objects that could fall, and asking if anyone needed Dramamine for the ordeal ahead. The voyage started out peacefully enough, and was quite a sight from the overhead perch, but soon enough the rocking began, and one-by-one, the barfing commenced, so frequent that buckets were necessary since the lavatories were in constant use. First, no surprise, were babies Xela and Quinn, followed by previously Doubting Thomases. My gut is strong, so I didn’t really feel a twinge; and three of my brothers also emerged unscathed. It’s a foggy remembrance right now, so my apologies to any others who beat back the storm. By the time we reached our destination, the ship was quite fragrant, and everyone on board made a beeline for dry ground.

A small price to pay for such an ambitious reunion.