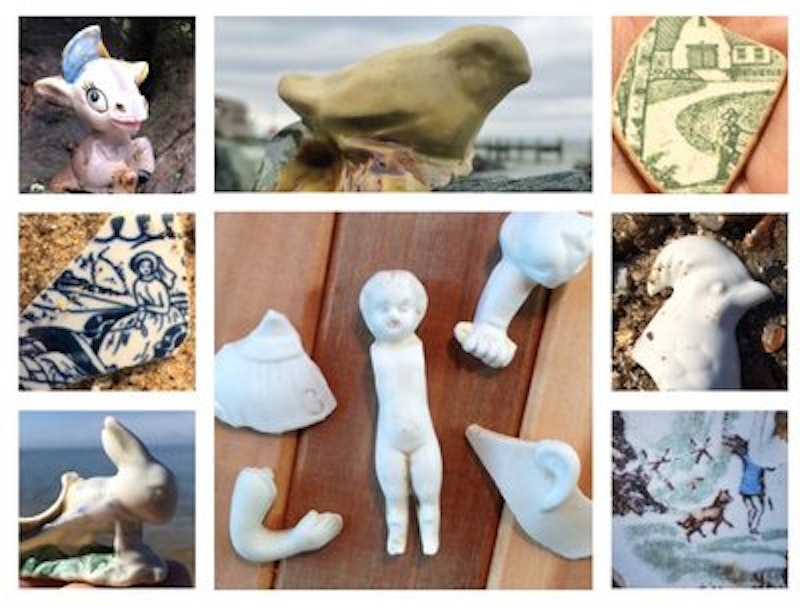 I blame the migraine medicine for what happened. I have to blame something, because there isn’t a person to blame besides myself, and who wants to go around beating yourself up for something you can’t change? But this is going to haunt me for a long, long time.

I was thrilled to attend the 2015 North American Sea Glass Festival with my daughter Faith. We were scheduled to exhibit our beachcombing collection. We enjoyed the show so much—meeting other collectors, sharing our finds, and competing in the Shard of the Year contest (which I wrote about in an article called “The Little Piece of Sea Glass That Couldn’t”) was lots of fun.

I worked on the display for a month. An antique bookshelf my great-grandfather built for my mother’s dolls when she was a little girl would hold vintage candy jars filled with sea glass separated by color. Jeweler’s cases held our collection: one case for a rainbow of some of our best colored shards, another for stoppers, better marbles, and other rare finds. One large antique printer’s tray was the display for best pieces of sea pottery, ceramics, doll parts, and other figural pieces. “The barnyard” we called one part of it: there were parts of many different animals—a cow with only a head and a cheery expression, a slice of a cat, a three-legged dog, the head of a rooster, a pig’s snout, a swan head, a perfect yellow bird still perched on a branch, a bunny toting a missing cart, and elephant with one ear, half a trunk, and no face.

My best pottery shards had been glue-dotted to the tray. The pottery expert had pointed out which were the oldest, but my favorites were the ones with tiny scenes: a one-inch perfectly wave-tumbled green piece depicting a farmer in his field, a woman on a horse in the snow, a spinning wheel, a girl walking her dog. What are the chances that a plate can go into the water 100 years ago, break just a certain way so this tiny fragment with a perfect, charming little story/painting on it could wash up on the beach for me or one of my kids to find?

Though there were other doll parts (a few arms, including one from Ft. Bragg/Glass Beach in California, half a head, an ear), probably the oldest piece in the best condition was the frozen Charlotte doll. She was missing only her arms and was probably my favorite piece on the tray.

The end of the festival was busy. My daughter and I had carefully packed the collection and placed it underneath the skirted tables so we could go watch the “Shard of the Year” contest results. After the judges announced the winners from the 650 entries, we returned to the collectors’ area and began to pack up the car, which had to be packed exactly a certain way to allow for the spot for the antique printers tray. It couldn’t be packed into a box because nothing could be placed on top of the fragile ceramics. This is the part where the migraine medicine “haze” probably did me in—the forgetting of the little things the doctor had warned, and unfortunately apparently sometimes the really big things.

One of the best parts of the national sea glass festival is trading and sharing. I traded one English marble with another collector for a handful of cool Ohio railroad marbles I’d never seen. I traded a miniature marble for a violin-shaped tiny bottle. I gave one lady a piece of red sea glass because she’s been hunting her whole life and never found one. I promised to mail a lady a whole Coke bottle because she’d always wanted one, and gave another a piece of frosted sea glass reading “Coca-Cola” because her late father had worked for the company. And at the end of the long day, when the last special tray was ready to be packed up, one of my favorite vendors of all came out to see my collection—she’d been too busy during the festival. Unfortunately, we were all packed up. But she brought my daughter back to her table to give her a beautiful necklace. I put down my antique printer’s tray on a bench to go through another container and get her son a frosted miniature bottle, something I thought he might think was cool. It was a fun trade.

In that migraine-medicine-muddled moment, I forgot to pick the tray back up and place it back on top of the other container to carry it to the car. We drove home. The car didn’t get unpacked until the next day; my husband unpacked it. My son’s birthday party and out-of-town family arrived, school started, life went on as usual. Eventually, I unpacked my collection. The antique shelf went back up, the jars of glass were carefully unpacked, and the jeweler’s cases went back into their spots. And then one horrible night, around one o’clock in the morning, I sat straight up in bed. It actually woke me up. Somehow I just knew the tray was gone.

I won’t lie. I cried. For the next few days, every time one of the missing pieces crossed my mind, I thought of finding it, how happy the moment had made me, and tears would come to my eyes. Only a beachcomber would understand this, and all four of my children, who’ve been combing beaches their whole lives (many of the lost items were found by them) would understand. My son tried to make me feel better. “Mom, you can go back in your kayak and find more stuff.” And he’s right about two things. I can go out treasure hunting again, pending the weather, about once a week or so. I’m lucky. And he’s also right that it’s only stuff. It’s not what’s important. I’m thankful I document my beach finds in near-real time on Instagram; those moments are all captured.

So there are two possibilities here—we don’t need Scooby Doo to solve this mystery. Either someone at the sea glass festival took my collection, or it got thrown away. It was not turned in to either the NASGA conference or the Ocean City MD convention center. Is it possible that a janitor tossed the heavy wooden antique tray into a trashcan? I suppose so. It's unfathomable that someone from the sea glass community would have taken it. The pieces aren’t valuable to anyone but me and God help someone if I see a single shard for sale online or displayed anywhere on the Internet. I will find out. Karma will find out. I'm from Philly.

I prefer the idea that my collection went into the trash. Why? Well simply because that’s where it started. The broken plates, figurines and dolls were once thrown away by someone, unwanted. They ended up in the water, got tossed around by the waves, and landed on the beach. Maybe the lost items will end up in the water again one day, they’ll get tossed around in the waves some more, and another beachcomber (long after my death) will find and enjoy them once again.

—Shown in the photo are some of the lost items. See all Mary’s finds on Instagram.