The Thing About Weddings

Before or after, they’re always a bummer. 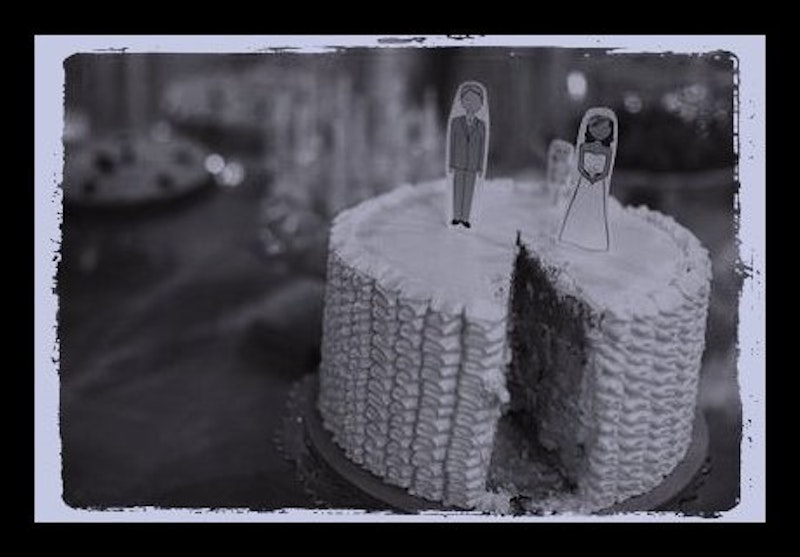 The first wedding I ever attended, for one of my older god brothers, was held in a mammoth, gothic church in Baltimore City; thinking back on it, heavy gray stone seems to dominate. I was 10, and my god sister was 10 or 11, and it was implied that we should dance together; neither of us was having that. The bride and groom’s song was “Endless Love.” There was a great deal of fluffy white lace. There was a bar, where one could order anything; I ordered two milkshakes and an ice cream float, but can’t remember whether or not an upset stomach followed. It all felt overblown and intense. My god brother’s been married a few times since then, and I have no idea what his life is like now.

The last wedding I attended was in the spring of 2010, in the sprawling backyard of the parents of a friend of my wife’s family. After years of pain, frustration and disappointment, the friend had found the love of his life, and they were exchanging vows. It’s all a blur now, beyond the warmth of conversation and the large tent and the bugs, but the affection was real, and there was a sense of joining this friend on a well-deserved victory lap. The friend is still happily married, holds down a great job, lives in a wonderfully imposing house in Sunbury, and is as awesome a dad (and stepdad) as he was a person—but I probably wouldn’t know this if we weren’t Facebook friends.

While no two weddings are identical, sadness hovers around every wedding. Don’t get me wrong; sadness is everywhere, all the time. Weddings, like funerals, stand out among life events, as sign posts, because they seem to confer meaning, they seem to symbolize the end of one journey and the beginning of another. Something is lost, something is gained, and everything is different. It’s impossible to think about weddings I’ve attended—and weddings I wanted to attend—without a twinge of melancholy, a sense that the world has shifted for good or ill.

A few years after Nodin was born, we attended the wedding of Alecia’s co-worker, who she initially strongly disliked but to whom she would eventually become very close, they were like sisters despite the generational distance—a woman who was in the room when Nodin was born, who stayed at our house, who was one of the first to hold him. When we moved away, Alecia held on, but the friendship dissolved on the other end. There was the wedding, too, of another co-worker, years earlier, who would eventually serve as one of Alecia’s bridesmaids before disconnecting in slow motion: the drunken nuptials, the badly lit reception, the groom with a chinstrap.

My favorite aunt had a wonderful wedding in 1999 or 2000, in what I believe was the same church where my parents were married; I distinctly recall shopping for a crystal vase or candleholder at a department store with my mother via the registry, watching my aunt and uncle jumping a broom to the Sanford & Son theme, my mother and godmother making bedroom eyes for a photographer (me), which seemed totally gross. It’s the last time I can remember my godmother, to whom I was very close, in good health. The marriage didn’t work out; my favorite aunt is still awesome.

When Alecia was pregnant with Nodin, we attended the wedding of my college friend Kevin, in Cleveland. We’d met the friend’s bride-to-be on a couple occasions—they’d attended our wedding, and we’d met for dinner before that—so there was none of that sort of attendant awkwardness. It was a pleasure to spend time with Kevin’s mom—who I’d never seen in a dress—and to meet his father finally, to watch everything come together at long last. Maybe I was disappointed not to be in the groom’s party, though there was no groom’s party—just a groom, Kevin’s best bro from high school—but there was something significant about being one of two college classmates to be invited along.

The impending sadness wasn’t related directly to the wedding itself, since nothing much would change in terms of our friendship; we rarely saw one another, we lived far apart, we had our own lives. That wedding was the last time I saw the other college friend, who gradually cut off communication a few years later, after I was unable to attend his wedding, in Texas.

The missed wedding is a bear. It can be a dividing a line, a fuck you, an impossibility—or a possibility you shrug off as a trifle but eventually reveals itself as the ultimate faux pas. I skipped my dad’s second wedding to work a busboy shift at the country club, which was simultaneously a statement of defiance and a long-term mistake. I skipped my mom’s second wedding because, honestly, I found out at the last second that they were tying the knot at a courthouse and sort of resented that last-secondness of it. (One of my friends went the courthouse route too, but he’s an unconventional dude—we’re cool.) One friend got hitched in the Bahamas, which, unless all your friends are loaded, is a coded dismissal, a sign of ex-communication to come. One friend got married in the country she grew up in, which made sense but portended eventual emotional distance. One friend and I got into it over whether or not we could bring our son to her wedding, and shortly thereafter, she disappeared into the abyss of her new life. A number of cost-conscious friends purposely kept their weddings tiny and didn’t invite me at all; I’m still tight with, well, one of them.

My own wedding took place in Baltimore County, in a castle, and was ludicrously expensive, with delicious food and bees and 80-some guests. Anyone who has read my pieces on this site over the past seven or eight months knows it wasn’t happily ever after; there’s some sadness attached to that, but the true pathos surrounding it extends beyond me. So many close friends and relatives couldn’t make it there, or flaked on the invitations. Two of the close friends who attended should’ve been in my groom’s party, but somehow I didn’t make them part of it. My best man gave an awesome toast that’s difficult to meditate on now because he doesn’t talk to me, or any of his friends. Every woman in Alecia’s bridesmaid party would reveal themselves to be full of shit, and when I think of that wedding, and how radiant and excited Alecia’s mother was, the memory moves me to the brink of tears. Alecia will probably marry again, someday, but her mother won’t be there to watch it happen.