The Pleasure of Anonymity

Watching people at the New Orleans Jazz and Heritage Festival. 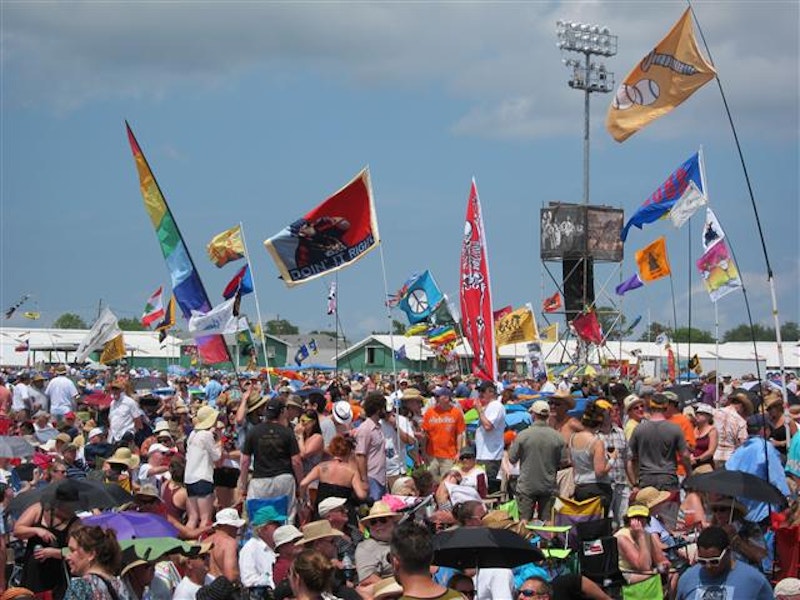 A few people ahead of me, there’s a big guy in a straw hat, his shoulders sagging under the burdens of a backpack, a camp chair, and one of those foldable coolers. He’s already sweated through his polo shirt, even though it’s only 11 and the peak of this New Orleans springtime day isn’t supposed to be until at least three in the afternoon. As I stand in line waiting, like him, to be let into festival grounds I can’t help but think about all the effort we’re going through to have a good time.

At the front of the line security guards are waiting to inspect his bag and cooler—water’s okay but not beer, since the festival grounds are just about the only part of New Orleans you can’t walk in or out of with a drink—and take his $75 ticket. He passes through without much difficulty, though he did have to put his chair down in order to open the cooler, and when he bent to pick it up again the cooler slipped off his shoulder, spilling ice packs and plastic bottles. But before long he disappears into the milling crowd, and I step a little closer to the gates.

I’ll see him again, propped in that chair with his cooler and bag beside him, drinking one of the $7 beers they sell. He found a spot somewhere near one of the makeshift roadways between stages, and from where I’m standing I can’t see any of the performances, but I can hear the zydeco stage just fine, and if I really try I can pick up the baseline from one of the main stages. All around us sweating musicians are performing to sweating audiences, sweating food venders serve hungry, sweating people iced lemonade and shrimp po’boys, and sweating artists sell and demonstrate various arts and crafts. I’m hot and uncomfortable in such a crowd, and having the time of my life.

I shouldn’t be enjoying this. I thrive on isolation, and whether as a couch surfer or hiker, I tend to be most happy when I’m either alone or alone enough that I can lose myself in thoughts. But for some reason I’ve spent many days and hundreds of dollars camping out at music festivals, from southern California to upstate New York, and now, as a new resident of New Orleans I’m loving the fact that this city has a whole season of music festivals. There’s something about the way I can disappear into the anonymity of a festival crowd that’s taught me to love the hot, uncomfortable mess that is live music.

And when I think about it, one month and three festivals later, I keeping going back to that big guy and his folding chair. With all his sweat and effort, he’s become a kind of personal symbol of what it means for me to be a more active participant in the music and art I take in. When trying to explain to a friend or my mother why it’s become so important to go through all this effort in a world where music and art are only an internet connection away, I usually end up talking about this guy, a stranger I never actually talked to and about whom I know virtually nothing, but whom I plan to imitate, for as long as I can. Here’s to you, big guy—until I see you out there again.