The Superiority of Soviet NKVD Customs 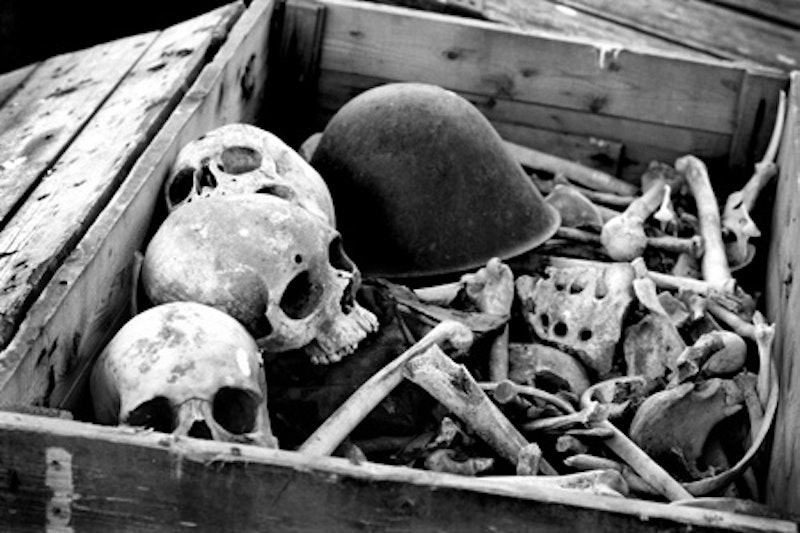 Father Nicodemus preached a corker of a sermon on Sunday. I had doubted that much more spiritual nourishment could be squeezed out of this Gospel verse: “Render unto Caesar the things that are Caesar's, and unto God the things that are God's.” But our bearded, snickering, wonderful “Russian bear” of a priest proved old Harris wrong.

After citing the verse he’d preach on, Father told us a story I’d never heard before. Apparently during the “heroic years”—the 1930s and 1940s—of the last incarnation of the Russian Empire, the NKVD hewed to a remarkable policy. That doughty secret police organ would actually charge the families of the traitors it shot for betraying the Great Russian people for the price of the cartridge it used in carrying out the sentence. That’s right. The agency would send the wife, mother, husband, son, etc. a bill for the bullet that its executioner—the righteous palach, to use the euphonious Russian word—had pumped into the traitor-criminal’s skull, usually right behind the ear.

This was, Father told us, an admirable example of the Russian capacity for “deep thrift” or “deep economy.” Rather than “externalizing,” in liberal capitalist fashion, the cost of NKVD bullets by including that cost among public disbursements—thus making blameless Soviet citizens ultimately, and unfairly, shoulder the expenses of eliminating their treacherous enemies—the Stalinists ingeniously “internalized” that cost. As Father put it (and I’m “touching up” his picturesque English here), “these necessary liquidations of parasite wreckers therefore took no bread out of the mouths of frank, obedient, loyal subjects of the Holy Kremlin.”

Father contrasted this “deep thrift,” which he said originated in the humane spirit of the traditional Russian peasant commune, with our American economy of waste, profligacy, obscene individualism, a rampant profit motive, and externalized costs.

“For all those years of the Cold War,” Father proclaimed, “your American jingo propagandists claimed that our Russian economy was ‘irrational.’ But is anything more exquisitely rational than making the traitorous pig—the Baltic fascist, the Zionist refusenik son of a bitch, the tribal Kazakh resister of collectivization, the Greek-Catholic priest?—pick up the tab for his own elimination? Of course not. If modern science could find a way to make the cockroach pay for his own extermination, would we not rejoice?”

The NKVD bullet, Father proclaimed, properly belonged to Stalin, the stern “Red Caesar,” who in turn embodied the mystical national community. And the family member who paid for the bullet that killed his treacherous mother, son, or daughter was “rendering” that cost back to the Red Caesar in accordance with the spirit of the Gospel. In doing so, he or she was winning some measure of redemption for the crime of a blood association with a “rabid cur” (in Father’s words) and partisan of neo-liberalism avant la lettre.

At this point, I was in wonder at Father Nicodemus’ theological acumen, blending as it did subtlety with the most exacting philosophical sensitivity. But then Father went even deeper.  He went on to discuss an even lesser-known phenomenon of the Russian 1930s and 1940s: the phenomenon of the “diggers.”

“Diggers” were Soviet citizens whom the NKVD enlisted to “dig” lead slugs out of the skulls of their just-executed family members. The NKVD was motivated here by the sound idea that retrieving that chunk of lead was even more economical than merely making the traitor’s relative pay for it—and that it would be good to, again, “internalize,” as it were, the cost of the labor employed in retrieving the chunk.

“The Tatar child compelled to dig a bullet out of his anti-Soviet traitor-prostitute mother’s skull was, at the wise behest of the NKVD, that agency that served as the ‘Glorious Shield’ of the Great Russian people, paying a particularly intense form of spiritual recompense—to the credit of his immortal soul, Mohammaden as that soul might have been. As, with a shaking hand, the little villain, standing over his mother’s corpse, dropped the bloody slug in the pan proffered by capable Chekist, he was indeed ‘rendering unto Caesar the things that are Caesar's, and unto God the things that are God's.’”

The richness of Russia’s organic culture never ceases to amaze the Orthodox convert. The native-born American, wading out into the ocean of Russia’s culture, will always be conscious of how meager is that pale scrim that we call our “civilization” here in the New World.

We Russian Orthodox, meanwhile, are looking forward to Shrovetide and what the Russians call Maslenitsa, or “butter week,” when we jovial Christian spirits make and eat pancakes in celebration of winter’s demise. This Sunday will find the Harris homestead deep in delectation of the savory crepe!