When you’re a single woman of a certain age, you catch Fatal Attraction and start to think Glenn Close got a raw deal. 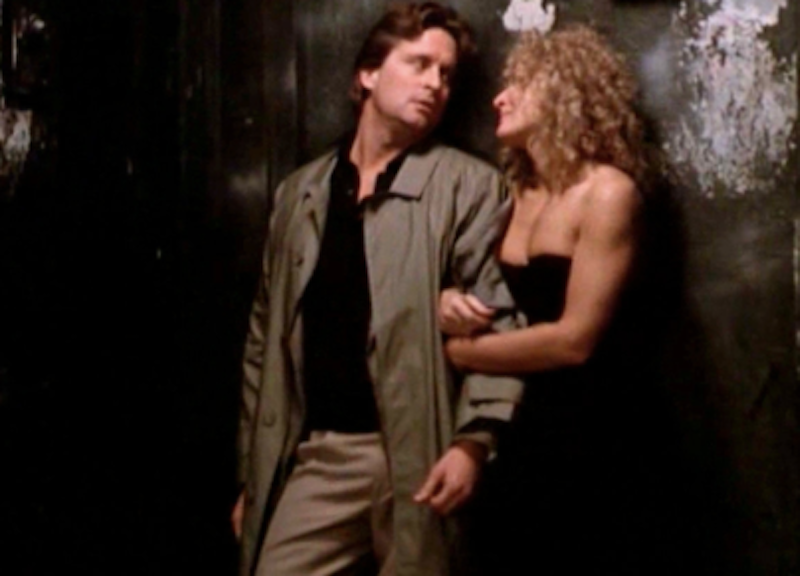 At a certain age if you're not married and don't have children you take up fencing or Tango and begin to consider hobbies of increasing bizarreness. No husband, no child—why not keep bees or throw yourself off a plane? Life is now, you think, having arrived in the middle of it. So you sign up for skydiving lessons and get that picture of yourself mid-air, smiling desperately, then post it to Match.com. “Living life to its fullest”? Or trying accidentally to knock yourself off? The answer is unclear. Perhaps you’re just trying to jolt yourself awake from the ongoing nightmare that’s single life. One always wakes up before hitting the ground, right? Say “Cheese,” and then, “OK, Cupid!”

It can be tricky if you’re lazy: I don’t have the discipline to learn Bridge or French cooking, and while I’ve inherited a piano, I haven’t gotten around to lessons yet. Collecting is easier. These days, with the Internet, collecting is easier than ever. You can buy all 10 Hellraisers at once on Amazon if you decide you’re a horror buff and have enough money. But then, what do you do once you have all 10 Hellraisers? You might consent to being set up by a friend. Or else sleep with her husband.

If you’ve got the energy, middle age is a great time to get cross and fit. Hence Crossfit, the exercise craze sweeping the nation. Hot and angry is a timeless pairing. Witness Dante Alligieri, 35 and furious, commemorating his entry into mid-life by imagining a hell in which sinners are sentenced to an eternity on treadmills. Or am I thinking of Sisyphus? Or was Sisyphus, according to Camus’ existential self-help essay, happy? It’s hard not to think Sisyphus wouldn’t throw himself off the top of that mountain after the fifth or sixth futile roll up. But then, Camus reminds us, he likes the exercise.

Sometimes, after his workout, Sisyphus will attend a cocktail party where everyone but him is married, and he’ll tell his friends all about his fitness regimen. “Tuesdays are glutes,” he says, his ass bursting through his khakis. Sisyphus is the most toned person at the holiday party.

Odd then that who should catch his eye, but the slack woman across the room, grumpily asking the cater-waiter if they can put the flour back into the flourless chocolate cake. Well, she’s also the only other singleton there. She hates exercise, she says, sipping her wine after the host introduces the two of them, before Sisyphus asks about the welt below her eye. “Bee sting,” she answers. And something about her stirs his heart.

She’s 38, she says near immediately, almost as a threat. She’s been single a long time and has her own life and doesn’t want someone coming in, throwing his rock around her hives.

The Buddhists say the secret to happiness is freedom from want. “Remove all desire and only then will you find peace,” the beekeeper read in a book whose cover showed a toothless guru clothed in rags, sitting on a cold stone floor. “I want what he has,” she opined from under her warm cashmere throw, one of a growing collection. At a party later that same night, she took one look at the ass on Sisyphus and lamented her lust.

Do you think they’ll get married?

“I love scuba-diving” a divorced molecular biologist told me on an early morning Jitney heading in from East Hampton last summer.

“It’s a great way to murder your wife on your honeymoon,” I answered, referring to a recent episode I’d seen of 48 hours. “I’m a big fan of True Crime,” I explained, “and terrified of the bends.”

He said depressurizing on your way up is a cinch and convinced me to meet him for a drink later that night, after his pharmaceutical conference broke up. He owns a company that manufactures cancer drugs, he said, as if trying to cure cancer made him some kind of catch. He smiled and his white dogtooth caught the light. Then he showed me a picture of his airplane. After his divorce, he took up flying and got his pilot license.

I went home in a cab alone. “Let me know you got home safe,” he said, before closing the cab door, as if that counted toward taking care of me. What would he do if I texted instead, “They’ve got me! Help!”?

When I texted neither a half hour later, my phone beeped breathily. “I’m in bed. Send me pic,” read the message. I sent him a picture of myself jumping out of an airplane that looked a little like his.

At the co-op association meeting, where we’ve all come to vote for the new board, there are couples from all of the apartments surrounding mine. A man I met in the courtyard spots me and smiles.

When you’re a single woman of a certain age, you catch Fatal Attraction on TBS and start to think Glenn Close got a raw deal. You tweet: “Fatal Attraction is the tragic account of a stylish career gal who is mistreated by a married man and his wife.” You tweet this from home, while heading into another Saturday night alone on your sofa, as you get ready to watch your favorite TV show.

When you’re a single woman of a certain age, people see you in one of two ways—husband-stealing vixen or sad old spinster—you realize at the co-op board meeting, when you try to make conversation with a man in the elevator. Was it Machiavelli who asked if it was better to be feared or pitied?

Married women regard you suspiciously, as they hustle their husbands away from you at parties. And the married men themselves? They come in two varieties—the faithful regard you fearfully, as they would any garden-variety devil. You’re there to tempt them, and they shrink back with crossed fingers, mumbling, “We, my wife, our kids, our dog…”

They shrink back, and you understand that your vagina is a black hole, and that there’s danger in standing too near its event horizon. Were you to spread your legs you might swallow them and their Enterprise whole. When you sit, you cross your legs tighter, eager to protect the innocent men you haven’t met.

“Live long and prosper,” the husband says bidding you farewell, after spotting his wife on the other side of the room, now charging over when the elevator door opens, after she sees him with you. “You reach a certain age,” he tells you just before the doors opened, “and you think, why the hell not stand in line and get your picture taken with Spock. Live a little, you know?—my wife let me go to Comic Con last year. The photo’s on my desk in my office; my patients love to tease me about it.”

“What kind of doctor are you?”

The other kind of husband, the one you met in your co-op’s courtyard while he was walking the family dog and you were walking yourself, looks at you like you were a plate of shrimp on a buffet table at some charity fete he’s attending with his wife. Guiltless, he rises and goes back for seconds. He piles you onto his plate: “I love talking to you,” he says more politely than any of the single men who’ve texted you nude pic requests after you got home safe no thanks to them.

Among the single, an invitation to lunch is a clear indication of either friendly or professional intentions. But then, the adulterers ask to meet during the day, too, because that's when they can get free, so it's hard to know if you're going to a social-professional lunch that might advance your career, or on a first date with a married man. Or both.

Is adultery part of adulthood? And if it is, is this good or bad news for those of us who didn’t get picked for the role of wife? You there, in the dugout on the bench—take a swing? Your married girlfriends tell you to stay positive; there are honest guys out there, like their husbands, who wink.

To be single at a certain age is to be wedded not to one man but to all. Even if you reject them, the husbands have given you a secret to have and to hold. Walk out into the desert, vixen, and exile yourself from married company. Or show up to dinner, spinster, and look down at your feet. “Marriage changes everything,” my married friends tell me, and I think later, how true, when I see a gold band brushing my knee.

Do you still want to be a wife? Or are you actually the other woman? Did you have it wrong all these years when auditioning for the role of ingénue? Does everyone understand something about you that you don’t? Are adulterous men and their suspicious wives your teachers? Do monsters wake up and ask themselves, “Am I a monster?” Are you Shakespeare’s Dark Lady? Should you be so lucky? Are you not the house with the white picket fence, but the storm that threatens it? Should you say yes to coffee? Yes to lunch? Should you kneel down, gather your wind in a motel room with day rates, and blow?

Whom can you ask?

48 Hours, my favorite of the True Crime shows, airs on Saturday night for reasons that are obvious: You, lonely lady, were right to stay home tonight, for the world is filled with murderers and thieves. Here, an hour supplying you with proof.

Another seemingly kind neighbor has murdered his wife or mistress, while you sit on your couch, and nod knowingly: People are shit is the show’s thesis. They'll kill you for a potato chip if they're peckish and think they can get away with it. Lock the door, old girl, lock your heart!

I sometimes wonder of a Saturday evening spent at home, am I missing out? Is life passing me by? Where is my love story? Should I consent to be a complication in someone else’s? The solemn True Crime TV journalist consoles me—“Evidence suggests he tampered with her scuba diving mask.” Here are the dead, the TV says, jolting me awake. You are alive.