From Limelights to Methodists to a presidential birthplace. 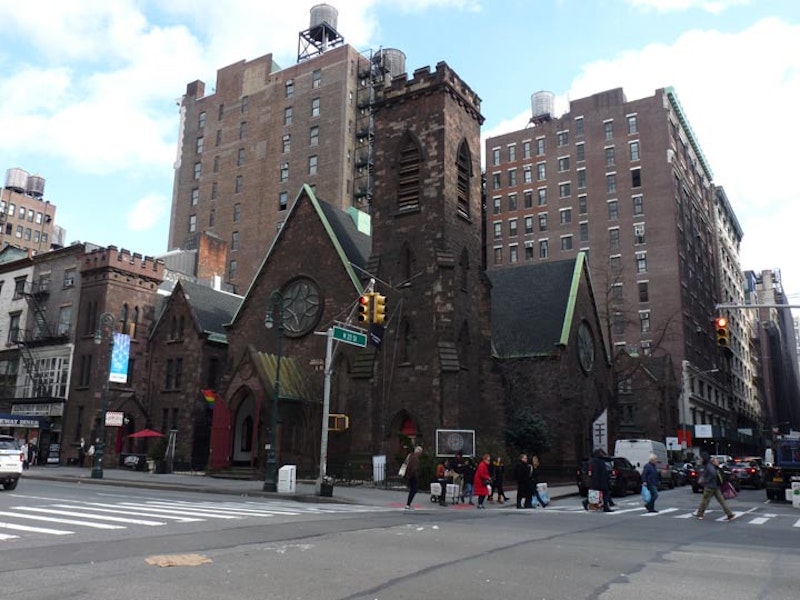 Recently, I’ve walked selected Manhattan streets from east to west. Not necessarily river-to-river; many of the blocks near the rivers are lined with dreary institutional buildings or warehousing and don’t pique my interest. Smaller is better and I’m fascinated with minutiae: the narrow buildings two windows across, say, or the buildings with wide entrances and carved horse’s heads that mark their former statues as carriage houses or stables. However, when buildings are of a certain age, the biggest ones are still gripping because they were built with recognizable styles and fascinating embellishments. In recent weeks, 15th, 16th and 21st Sts. have undergone Forgotten New York-style scrutiny, and today, 20th St. gets the treatment.

Above, at 6th Ave., is the oldest building on the street east of the slightly older General Theological Seminary complex on 9th Ave.: the former Episcopal Church of the Holy Communion, which was known for several years as the Limelight.

It was one of a flock of Limelights run by impresario Peter Gatien in the 1980s and 1990s; other Limelights had been opened in Hollywood, FL; Atlanta, Chicago; and London. The club was famed for presenting techno, industrial and glam rock, and for its drug drenched “club kid” culture. It operated as a disco from 1983 to the late-1990s. (In the 80s I preferred the nearby Danceteria on 21st, which presented a lot of new wave acts.)

The church laid its cornerstone in 1844, with the great Richard Upjohn the architect, when 6th Ave. was a path known as West Rd. and still ran through pastures and farms. After over 130 years as a church, services gave way to an Odyssey House drug rehab center, but Odyssey then sold to Gatien in 1982. Gatien’s had legal trouble over the years for flouting tax and immigration laws; murder and other crimes ever-present with drugs also were a part of the Limelight scene. Gatien sold to a developer in 2001, who ran the Limelight as The Avalon for four years.

Today the building hosts Limelight Fitness and Grimaldi’s Pizza, two venues that seem to cancel each other out. 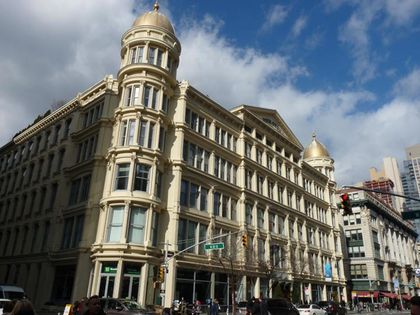 Who was Hugh O’Neill, and why is his name on this building high above 6th Ave. and W. 20th St.? Circa 1900, Hugh O’Neill owned the building, and the store on the ground floor. Formerly it was part of the so-called Ladies Mile strip along 6th Ave. in the 20s, featuring department and dry-goods stores. O'Neill was known as "The Fighting Irishman of 6th Avenue." Today, offices occupy the upper floors, with franchisees lining 6th Ave.

In the 1990s, Ladies Mile rebounded after this stretch of 6th Ave. had sunk into decrepitude in the 1970s, as new stores like Bed, Bath and Beyond occupied the older emporium buildings. The Hugh O’Neill building even regained its former gilded pair of domes. 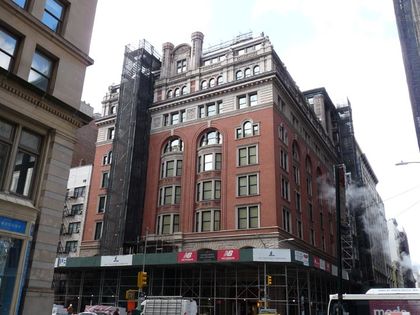 I didn’t realize it at the time, since the ground floor had been corrupted and “modernized” while I was working there, but 150 5th Ave. at W. 20th St. is perhaps the most architecturally arresting building in which I’ve been employed. The Romanesque Revival masterpiece was designed by architect Edward H. Kendall and constructed from 1888-1890 for the Methodist Book Concern and Missionary Society. At the time, this stretch of 5th Ave. was filled with religious publishing companies, and it would continue to harbor publishing for over a century.

The Methodist Book Concern turned out religious tomes and periodicals such as The Christian Advocate and Sunday School Journal. After a few decades, the MBC moved to Nashville, TN in 1939, but maintained a retail office at 150 5th until 1962. The three top floors had been added in 1909, providing medieval-style battlements and the trigram MBC. The building later was home to a laundry workers’ union health center and Ideax, a camera manufacturer. The original ground floor designs had been replaced with a boxier look by the time I arrived in early 1981 at a surviving printing firm, Lexigraphics. Thankfully, a 2001 reconstruction restored them. 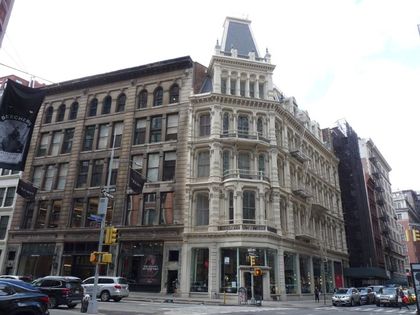 Samuel Lord (1803-1889) was a British foundry worker from Yorkshire who came to the USA with dreams of entrepreneurship, opening a drapery-dry goods shop on Catherine St. in what is now the Lower East Side in 1824, and after struggling for over a decade, he sent for his wife and children to join him. At about the same time his brother-in-law, George Washington Taylor, became a partner and investor.

Lord and Taylor opened a larger store near the docks at Grand and Chrystie Sts. in 1854, at a time when Grand was among the city’s busiest shopping streets—it was close to the east side docks along South St., making importing goods a simple matter. The business became wildly successful, both men were millionaires by the early-1860s, and were then able to retire and return to England. The store moved to E. 20th St. and Broadway in 1902 and then to 5th Ave. and W. 38th St. in 1914, where it continued a 150-year run of success, until 2018.

The store’s third location was in this French Second Empire building, on the southwest corner of 901 Broadway and W. 20th St. L&T was here from 1873-1914 in one of NYC’s larger cast iron front buildings. 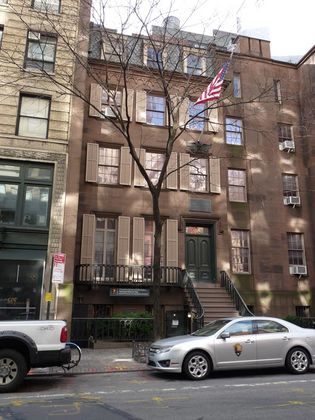 Theodore Roosevelt (1858-1919) was the first U.S. President born in New York City, and his boyhood home, at 28 E. 20th has been appropriately preserved, or rather, its site has. The building is a National Historic Site and five rooms have been appointed with period furnishings, much of it courtesy of the Roosevelt family, and a small museum contains some of TR’s papers, documents and diaries.

This house was built in 1923 as a faithful reconstruction of Roosevelt’s home between 1858 and 1872. After the original house was demolished in 1916, the Women's Roosevelt Memorial Association rebuilt it using architectural details from an identical house next door, which has since disappeared. It’s open to the public: call (212) 260-1616 for hours. 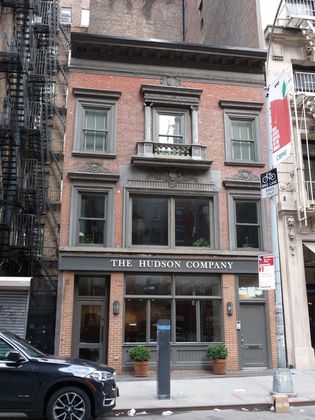 There are buildings on the same block that predate Roosevelt’s time here that he undoubtedly walked past as a young man. One of them is #5 E. 20th, a building constructed about 1850 with additions in 1865 and 1893. It looks untouched, except for the sidewalk sign, since the 1890s, and I’ve always had a fascination for tidy brick buildings.

The property was an open lot until about 1850 when William V. Brady built a two-story stable, which was converted to residential use during the ensuing decade. Owner Eugene Higgins built a rear addition between 1860 and 1865, and Higgins contracted to build a third floor in 1893. Over the years, ground floor tenants have included a “Japanese fancy goods” purveyor, Proctor’s Furnishings, a restaurant owned by John Bohling, and a semiconductors seller. The Hudson Company, the current tenant, sells high-end hardwood floors. 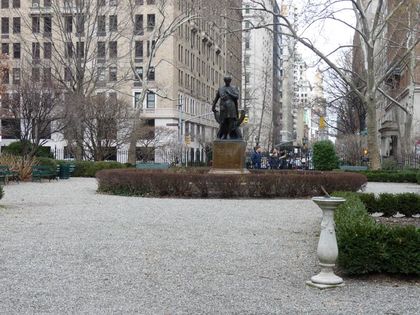 Mere commoners are not permitted into Gramercy Park, a small parcel of a private park between E. 20th and 21st Sts. and 3rd Ave. and Park Ave. South. You must be a keyholder at any of the buildings surrounding the park to enter it (and some selected buildings in the area, as well; there are 400 keys in all, the same number of people on Mrs. Caroline Astor’s famous list of who’s who in little old New York of decades ago). However, once a year, on Christmas Eve, the Gramercy Park Block Association permits the hoi polloi in the heavy iron gates for a glimpse within, as well as a Christmas carol sing-a-long hosted.

Edwin Booth (1833-1893) is the only actor to be memorialized with a bronze portrait in New York City. Beginning in the mid-1800s, Booth became renowned as a celebrated portrayer of Shakespearean roles, notably Hamlet (in which role he is shown in this Gramercy Park statue). He was an innovator in a more natural acting style, as opposed to the harsher bombastic style that was popular then.

The Players Club, an acting society at 16 Gramercy Park South Booth founded in an 1847 townhouse he purchased in 1888, bestowed the portrait, sculpted by Edmond Quinn, to Gramercy Park in 1918.