The Spirit of Laurel Canyon

Not far from Hollywood, deer still frolic in backyards. 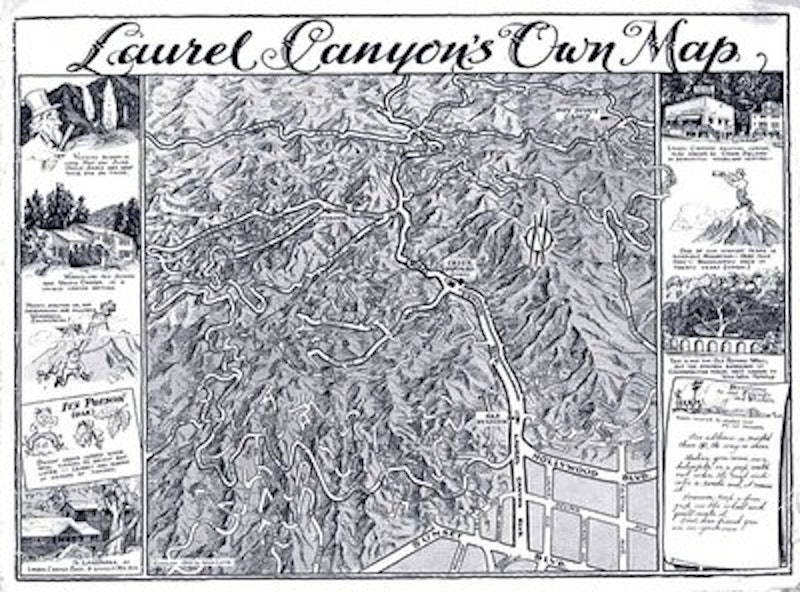 I’ve lived in Laurel Canyon for the past 20 years. The neighborhood is a quiet Los Angeles suburb nestled between the San Fernando Valley and the heart of Hollywood. Developers have infiltrated the area with multi-million dollar homes but the hills remain dotted with ramshackle cabins and concrete oddities built by hippie renegades. While the city drones in the background, hawks fly overhead and deer still frolic in backyards.

A half-century ago, Laurel Canyon spawned a music revolution. The area was home to Carole King, David Crosby, Cass Elliot and Jim Morrison. This is where Joni Mitchell wrote Ladies of the Canyon and Graham Nash wrote “Our House.” Frank Zappa’s tree-house cabin on Lookout Mountain was the focal point of the scene. The cabin remains intact but has been unoccupied for years. A small pond fed by an underground spring rests undisturbed in front of the cabin. The previous tenant stocked the pond with bass and left out a fishing pole so wandering homeless people could eat.

Next door to the cabin is the sprawling Houdini Mansion. Famous residents have included Harry Houdini, Errol Flynn, Bugsy Siegel and W.C. Fields. Music producer Rick Rubin owns the mansion these days and bands like Red Hot Chili Peppers and Linkin Park have recorded on the property. According to singer James Murphy of LCD Soundsystem, “The mansion is haunted by a ghost that may or may not be homosexual.”

What gives Laurel Canyon its unique flavor is the beautiful eccentrics who live in the area despite the influx of the nouveau riche. A few months back my wife and I stopped at a garage sale on Wonderland Ave. We were eyeing a swamp cooler when we noticed a massive wolf-husky hybrid roaming the front yard.

“Is that a wolf,” I asked the woman tending the sale.

“A good witch. Not like that crone on Lookout Mountain. Stay away from her. She’s bad news.”

We bought the swamp cooler after my wife suggested it would emanate “good vibes." Another of our neighbors is the man on Skyline Ave. who used to service actor Steve McQueen’s racing vehicles. He lives in a dilapidated shack covered with a tyvek liner to protect a rotting roof. He pours all his money into his classic cars that line the street. His best friend is a yellow Labrador who sits at the wheel of a 1940s Packard while the man tinkers with the engine. Neighbors have complained that the man’s rickety home brings down property values but since the man is nearly deaf (from years of close contact with car engines), he conveniently ignores the grievances.

At the top of Wonderland Ave. sits an old military complex wedged between multi-story houses and a grove of California oak trees. The Army Air Corps built the barracks in 1947 as a top-secret movie production studio. It was here the Defense Department produced documentaries including a famous series on above ground nuclear tests in Nevada. The studio was deactivated in 1969. Recently, it was converted to a rehab facility that caters to Hollywood stars battling addiction.

Not far away sits the home of a renowned music producer who helped shape the emerging rap and hip-hop scene in the 80s. The house is a five-story, concrete and marble oddity with statues of angels and gargoyles surrounding the property. The man is known for his one-of-a-kind Mercedillac, a 1960s Mercedes coupe soldered with classic Cadillac wings. Wedged into a hill in the backyard is the remainder of the Cadillac. The car is filled with a small refrigerator, a heater, a cable television hookup and a makeshift bed in the backseat. The man leased the Cadillac as a one-bedroom rental property to struggling rock and rollers until the authorities found out and shut him down.

The pride of the community is the Wonderland Avenue Elementary School. Considered one of the best K-5 schools in the city, local parents commonly lie about their home addresses to obtain school eligibility for their children. Back in the 90s, the school playground was known for epic Saturday pickup basketball games that attracted local celebrities. I remember playing in one game with Keanu Reeves, Adam Horovitz of the Beastie Boys and Perry Farrell of Jane’s Addiction. After locals complained about “adults” monopolizing the playground, school security was increased and the games came to an end.

Rock stars like Adam Duritz of Counting Crows and Mark Mothersbaugh of Devo still live in the Canyon. But the neighborhood is changing. Old residents are dying off and their quaint homes are being torn down and replaced with modern behemoths. High-tech camera and security gates are everywhere. The new canyon denizens are advertising executives, investment bankers and tech company CEO’s.

Fortunately there’s still a man on Skyline Ave. working on his vintage jalopies as BMW’s and Mercedes SUV’s drive past him. Sometimes I walk down his street just to see him and his faithful Labrador. The sight of the tyvek liner flapping in the wind atop his house brings me a sense of peace. As do the hawks soaring overhead and the ubiquitous California Oaks. This is the Laurel Canyon I know and love. With luck, the Canyon spirit will remain intact for years to come.