When Traie and I Met Assem in Cairo 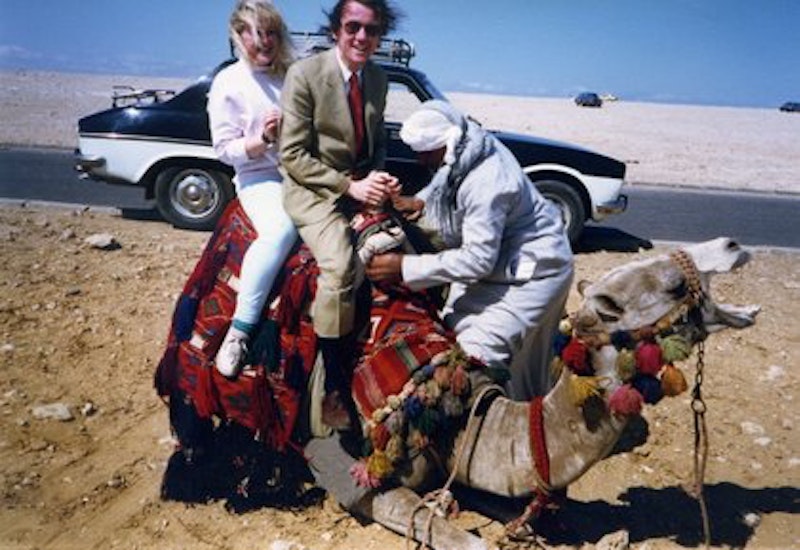 A couple of weeks ago my eldest niece Traie, on a road trip from Florida to Boston with her beau, stopped by our house in Baltimore for a visit. We hadn’t seen her in over a year, so it was a lot of fun catching up about our respective kids, talking politics—she’s a Marco Rubio in ‘16 supporter—and hearing her crazy stories about a consignment shop in Miami that sells new shoes from the early 1960s decorated with zebra hair. One of my sons said, “Hey, Traie, isn’t that illegal, and don’t you feel guilty wearing them?” She shot back: “Now it is. But that zebra was snuffed before I was even born, so I’m not losing sleep over it.” Her sense of humor is quick and irreverent, and my wife Melissa and I were rolling on the floor.

I was just 11 when Traie was born in 1967—for about a week afterwards, the kids on the school bus would chant in unison, “Goodbye, Uncle Rusty!” as I reached my stop—and, along with her brother Caleb (1969), we have many cherished memories, a lot of them from when I was their babysitter on two month-long European jaunts in ’72 and ’75. I suppose I wasn’t the best influence—my sister-in-law groaned as I led them to slot machines on a ferry ride from Oslo to Copenhagen—but the three of us had a ball. For confirmation, just ask Irving the Wolf, the hero of nightly bedtime stories.

In the spring of 1987, my brother asked if I’d be able to take off from work and accompany Traie to Egypt for 10 days (she was in college at the time) and since my business, Baltimore’s City Paper, was prosperous and running smoothly, I replied, “When do we leave?” (As it happened, my partner Alan Hirsch and I sold the paper that summer, and I toured the world for four months, meeting up with Traie and her parents in Athens, and then moved to Manhattan a few days before Christmas.) After a long flight and extraordinarily annoying luggage pick-up at Cairo’s chaotic airport, we reported to the Ramses Hilton (a swanky casino was on the top floor, with a view of the Nile), cleaned up and hit the streets. I’m not an over-the-top museum enthusiast, but obviously it’d be negligent, and dumb, to visit Cairo and not spend at least a few hours in the Egyptian Museum inspecting mummies and the like, and so that’s where we headed, dodging the motorists who paid no heed to stop signs or red lights. Traffic in Cairo (at least in ’87, not that I’d go there today with the current turbulence) makes NYC’s seem like that of Cleveland.

At least that was the plan. We were waiting on line outside the museum when a casually-dressed fellow, probably in his 30s, took one glance at Traie’s blonde hair and began to chat her up. (You can see why my brother wanted her to have a chaperone.) I nudged Traie and told her to ignore the guy, but when he said, “Hello, beautiful young lady, I think you must like perfume, no?” she was snookered. I tried to tell him to scram—politely—but Traie was all ears and in 10 minutes we were in a dark little shop that sold perfumes, oils, bath salts, the works. Assem, our personal grifter, was charged with leading tourists to this spot and others (for a cut of the action), and he fetched some peppermint tea for Traie and sweet, sludgy but excellent coffee for me. After a half hour, we were done, and Traie had purchased over $200 of perfume—the proprietors were flabbergasted—and Assem led us back to the museum, and suggested he take us to Giza that afternoon to see the Sphinx and Pyramids.

Back at the hotel, I gave Traie a lecture about such roustabouts, who prey on young, attractive Western women, but she laughed me off. “Hey, Rusty,” she said, “skip the shit-fit and loosen your tie. Assem’s a peach!” The deal was done. At around five, our new best friend, after a call from Traie, met us in the lobby and in a clunky car drove to Giza. He introduced us to a guide (a buddy, but of course) and while we gazed at the Sphinx—dinky on first sight, but spectacular on the second go-round two days later—Assem repaired to a gift shop, no doubt boasting about his score. After marveling at the pyramids, it was time for a camel ride: as you can see from the picture above—on a donkey for practice—I’m wearing a linen suit and dress shoes, probably not the normal attire for a romp in the Sahara, but hell, it was the 80s. Afterwards, Assem met up with us, and took us to an outdoor cafe, where I devoured the best roast chicken I’ve had in my life. A Top 10 culinary experience.

So I was wrong about old Assem. After that delightful afternoon, I proposed he take care of us for the duration, and gave him $200 up front. I guess that was a lot of cabbage, for he grinned widely, and insisted on paying for all our meals at out-of-the-way joints that his friends ran, shepherded us through the outdoor markets in Cairo, swatting off touts like flies, and escorted us to his mosque. For some reason Assem, as a local, wasn’t allowed in the casino back at the Hilton—one night, Traie racked up winnings of nearly a grand playing roulette and we got promoted to a better table, before losing the entire kitty—and I imagine he might’ve had a family to get back to.

When I’ve traveled to non-Western countries there’s always someone who wants to lead you around—in Jamaica, they’re nasty; in Manila, downright scary; and in Bangkok very matter-of-fact—and it’s usually a smart idea to keep your own counsel. Then again, excessive caution isn’t always the way to go. If it weren’t for Traie’s youthful, and reckless, assent to the attentions of Assem, our trip to Cairo would’ve been far less eventful.