I’m a Buddhist, so leave me alone. 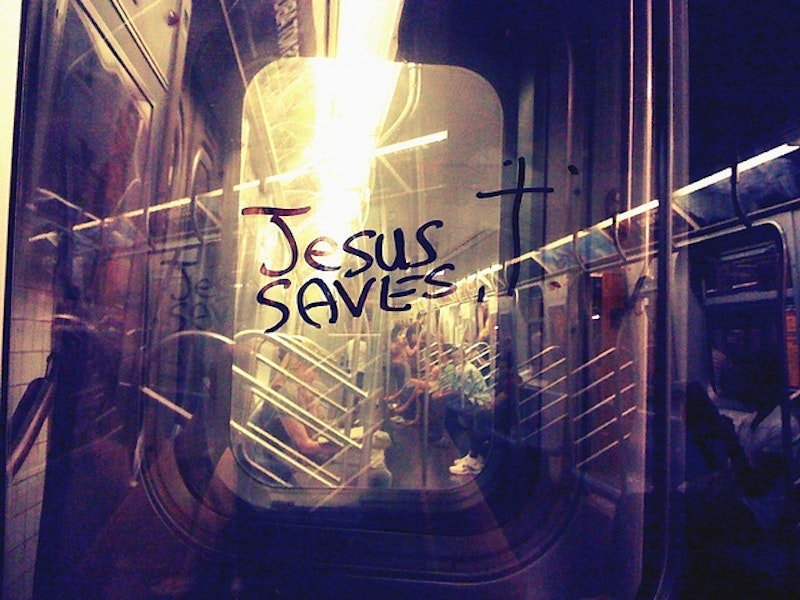 I think it's time we cleared up a misunderstanding. When I get on the 4 train every morning and go to work, you board behind me. You wait until the doors close, and launch into your spiel. You’re here to tell me and the rest of the car about Jesus Christ, how he’s coming back, and how important it is we repent en masse.

Please understand: I don’t give a shit about anything you have to say, and you’re wasting your time. I'm not going to stand in your way if you want to keep going. By all means, tell me again how Adam and Eve ate the fruit from the Tree of Knowledge and created Original Sin (unfortunately, not the delicious brand of cider). Wax poetic about how we shall not know the hour, nor even the day (I'll settle for the week, if at all possible, Lord).

But while you yell way too loudly for anyone at nine in the morning, keep in mind that it’s pretty much impossible for you to tell me a new story about Jesus. I haven't read the Bible since religion projects in high school, but there are so fucking many of you, and you’ve pretty much covered every tale of importance in the Old and New Testament at this point.

My brain reached Christian critical mass long ago, and everything you're saying to me is passing right through my brain. I am beyond saving. Part of the problem is that I live in Brooklyn, where there are eight churches in a one-block radius of my apartment. On Sunday, my street is clogged with double-parked cars as parishioners flock to talk with someone who talks with God's intermediary (allegedly). When you aren't talking to me about Jesus, someone else sure is, just more indirectly.

Also, I've been a Buddhist since I was eight or so, but that's not a big issue. I've always thought Jesus was a super cool dude—especially the time he straight up demolished a bank. I just didn't have any interest in worshipping him as a deity. Plus, that fig-zapping thing was pretty petulant; although I can sympathize with not being able to find the food you really want.

What I'm saying, Brooklyn evangelicals, is that you’re interrupting my reading time for no good reason. I know everything that you're going to say before you say it. And I still haven't been to a church service for any reason in six years, and even then I was only there to play some Christmas carols as a favor.

If you want to pray for me, knock yourself out. You certainly don't have to, but I know it'll make you feel better. Just do it quietly, and we'll both get where we're going—in the long and short term—in a much better mood.