The Acting Road Not Taken

You don't want to necessarily be at peak Snoopy-hysteria for the whole thing. 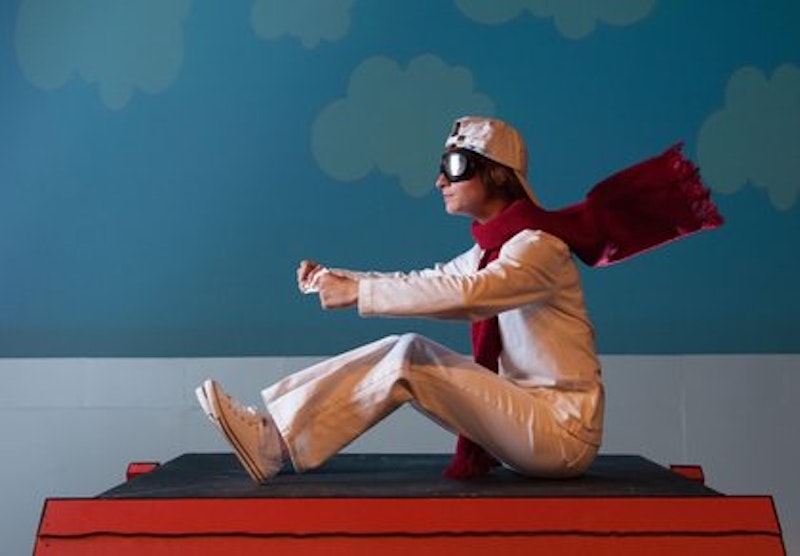 As I've mentioned elsewhere, my 10-year-old son is a buoyant ball of thespianism, which was something of a surprise to his parents, who are dour and shun the cursed sunlight. But despite my constitutional desire to hide under tables in dim-lit rooms, I nonetheless managed to interact with the outside world enough to organize an audition for the boy at Chicago's Lookingglass Theatre Company's Young Ensemble. In preparation he did a monologue as Snoopy fighting the Red Baron, which is pretty great; we put it on YouTube so the grandparents can see. He was accepted and very happy. His parents were proud, and cheered him enthusiastically (though not too loudly) from the dark rooms in which we characteristically huddle.

Anyway, in preparation for shooting down the Red Baron, the boy did rehearsal performances for us—and after a bit of hesitation, I offered some suggestions. Mostly these were along the lines of, "You don't want to necessarily be at peak Snoopy-hysteria for the whole thing," but I also did my own read-through of the part to give him ideas of how to vary his delivery. So for just a moment, I was acting. Admittedly, no one was going to let me into a Young Ensemble, because I am old. But it was fun.

I was surprised at how much fun. Again, I don't really see myself as a performer or an extrovert; as a freelance writer, I spend my days in front of the computer and try my best to avoid going anywhere lest I actually have to shave or make myself vaguely presentable. But when I do go out, I have to admit that, while I don't exactly think of myself as doing so, I kind of like performing. Making this video was enjoyable, for example. Earlier this year I spoke to a college class about Wonder Woman and tried to convince them that Bella from Twilight was a superhero. And going further back, I've done a voice-over here and directed a performance there. I remember for one of my friends' parties where everybody had to do a talent show, I gave a heartfelt rendition of Billy Joel's "Piano Man" while my wife howled loudly in pain off to the side in a mostly successful effort to drown me out. I hadn't even consumed any alcohol.

I did some theater when I was a kid too. I played the Tin Woodsman in a Wizard of Oz production; I wore a silver-painted box that came past my knees, so I couldn't climb onstage and Dorothy and the Scarecrow had to help me on for my big entrance. The next year the camp put on Fiddler on the Roof and I didn't get a major part. I still remember being disappointed.

Maybe that's why I stopped with theater—though surely I couldn't have been that disappointed. Probably I was just more interested in athletics and writing, and you can't do everything.  So through high school and college I was a mediocre soccer player and swimmer rather than a mediocre thespian. And I got it in my head that I wasn't a thespian at all, which maybe isn't precisely true.

You could read that as a sad story I suppose; all these years I had an actor inside me [spoken with great emotion and volume] clamoring to get out! But how much difference did it make? As Robert Frost said, "I took the (road) less traveled by/And that made all the difference," by which he meant it didn't necessarily make any difference at all. Everybody makes choices about what they're going to pursue and what type of person they're going to be and what sorts of stories they're going to tell about themselves. Those stories can be restrictive in some sense—but then, on the other hand, you've only got one life, and if you're a thespian, you're restricted in that you don't get to be a non-thespian.  As it is, it's been a nice surprise to realize that maybe I could have flown after the Red Baron if I'd wanted—and to watch my son do it instead.