The Pursuit of Art and Beauty

While I find some modern works interesting within the historical context of art, as individual works they often mean almost nothing to me. 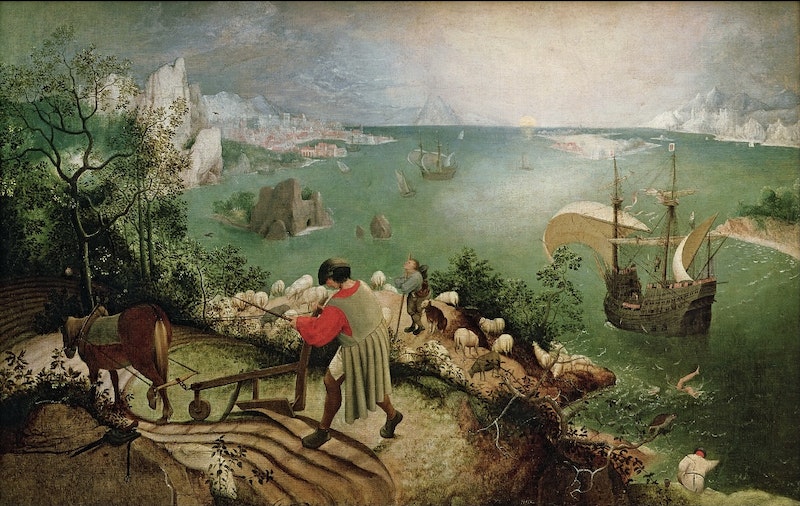 Where does one’s taste in art originate? Many artists I know come upon art relatively late in life, often in school where they’re given their first introduction, frequently in a political context. I’ve always felt closer to the art of the past than that of the present. I wonder if I hadn’t grown up in a household where there were a lot of books with colored plates of old master paintings lying around, whether I would’ve ever taken an interest. I recall looking at the “Fall of Icarus” by Breughel over and over when I was a child.

If art was made up of just Jeff Koons, Andy Warhol and Keith Haring and not Rembrandt, Breughel, and Titian I don’t think I would’ve ever really cared about it too much. While I find some modern works interesting within the historical context of art, as individual works they often mean almost nothing to me. Too often it seems to be art about art and not life, being a person, humanity or spirit. I don’t find much modern art beautiful and for me, the pursuit of beauty, which in my personal lexicon is a combination of aesthetics and structure,is the only reason to produce art. On the other hand, I would’ve enjoyed going to a party at Warhol’s Factory.

I recently went to an exhibit of modern art at the Pompidou Center; it was extensive, monumental and uninspiring. Was it because it seemed I’d stepped into a hardware store? Was it because that in the art that sought to be political nothing was left to the imagination? I was frustrated; I redoubled my efforts.

I sought an answer while inspecting the art, reading the descriptions of the works, the artist’s intentions, etc. I began to sense the source of the distance I felt: not one of the works seemed to have any link with anything even remotely connected with life as I perceive it. No work created in me a desire, a chance, for dialogue; none inspired thought; I just saw one-way streets. Installations, objects, paintings, projections, sculptures, it was endless. But I wanted to get into it! I wanted to connect with it more than anything; I don’t like feeling at odds with the art of my time.

Imagine my joy then, when turning down a small corridor I came upon an installation that fulfilled and far surpassed my desires. There was no door. It was a large, essentially empty white room with mirrors on the wall, in places there were traces of dirt. There were pieces of crushed paper randomly placed all over the floor. Some wires were exposed hanging from the ceiling and there was insulation material propped up in the corner. Then I noticed that the artist had installed urinals in the space; these were arranged on the left wall, while to the right there were toilet stalls. I couldn’t believe the genius of it! The artist had recreated a public toilet in the middle of the museum. What a commentary! Was it his or her desire to bring what’s normally hidden into plain view; the intimate personal space made public and shared—isn’t this the essence of art; its highest form? Besides, on a lower floor of the museum I had just seen Duchamp’s famous “fountain”—surely the present artist meant to reference and comment upon that work by its reincorporation into its original setting. And just seeing the face-to-face juxtaposition of urinals (standing) and toilets (sitting) expressed in one efficient gesture the mystery of “male-female” as established within the social context. The series of identical urinals also seemed like a sly reference to Warhol’s mechanical reproductions, but here the context supplied a meaning. I started to think that the artist’s intention was to catalog the major trends in 20th-century art. And aparallel thought convinced me I was on the right track, for by using the exposed wires and insulation the artist had in a sense exploded the space; revealed that which the space itself conceals. There was something true here. I felt humbled before this unknown Master.

I was looking for the plaque with the artist’s name and description of the work when I heard a toilet flush and a man stepped out of one of the stalls; he stopped abruptly and looked at me. Picking up his pace, while never taking his eyes off me, with an expression of concern and caution, he then quickly left without washing his hands.