The Aristocrats, Part One

The past has a second act. 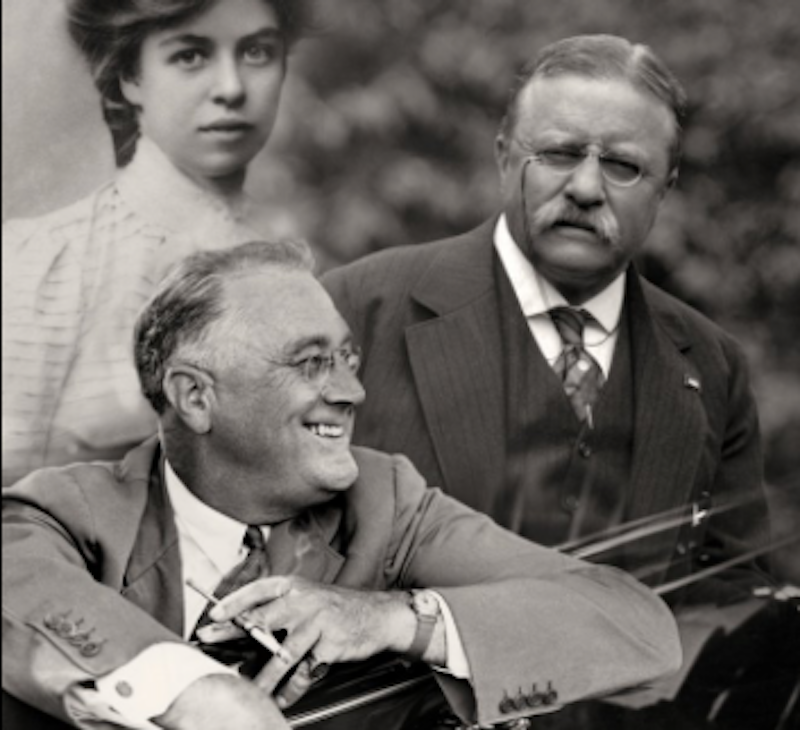 Outside the talent agent’s ribbed-glass door, in the antechamber of eternity, where Theodore and Franklin roll their Rs, and Vladimir and Véra time their steps, an Englishman flashes the V-sign and a Renaissance man bears the V-sabre of a Cavalier. Among these six stands a giant of freedom, whose name, like the land, remains. Among these seven stands the only president born in the Land of Lincoln. Minus these two, sits a group, members of the same class, whose group name is the same name as the group on the other side of the door. But the aristocrats are not The Aristocrats. The aristocrats are, however, TR and FDR, the Nabokovs, Winston Churchill, and Thomas Jefferson.

Along with Abraham Lincoln and Ronald Reagan, these men—and one woman—represent greatness.

Together, these eight, democrats to the last, do not include a single meritocrat.

Each is a sailor or swimmer on a river of rail or road, or an actual river, the Rock River, whose currents resound not with the bodies of the drowned but the voices of the saved, the lives notched in wood and printed on paper, during seven summers of service and 77 rescues by Reagan, the lifeguard of Lowell Park, Illinois.

Two hours south of the whispering winds of Reagan’s youth, in Springfield, Illinois, lies the source and mouth of another river, the beginning and end of an errand of national importance, in which the route from the state capital to the nation’s capital stretches 1904 miles across seven states, while the return trip is a 1654-mile fugue to an affectionate farewell, lasting as many days coming and going.

A 13-day trip to Washington, with stealth at the end of the beginning, and a 13-day crawl from Washington after the end of his life and the lifetime of his administration, the route is a prelude to rebellion and a procession in the aftermath of war.

Either route meanders like a river and flows with the music of history.

Were we to change the course of either river, making the rough places plain and the crooked places straight, were we to plot the Constitution en route to Washington or the Leviathan on its final route home, the latter the namesake of the enemy’s malice toward one, the one who said we are not enemies, that we must not be enemies; were we to turn the slats of the pilot into staves, and spare a rod for the maestro to conduct his score, we would hear the mystic chords of memory, swelling with the words of Gettysburg and the names of the honored dead.

We would also find Nabokov’s Russian translation of the Gettysburg Address.

A musician in spite of himself, and a lyricist despite his dislike of music, Nabokov’s notecards are his Notes on Prosody and the medium for his recordings on rhythm.

Here is the Tocqueville of the novel-as-travelogue, as fluent in the French of Democracy in America and as effortless in the literature of France and Russia as the best student at Cambridge. Here is a future American on European frontiers, with pride for America and the chance to pay his respects to the savior of America, visiting Lincoln’s tomb on November 7, 1942, and speaking to the people of Springfield about exile and the yearning of the soul.

Here he is riding shotgun, with Véra packing heat, a Browning revolver in her purse, as she drives their black Oldsmobile from the East to the West, and back, totaling 150,000 miles over five years.

Past the cabins and cottages of two-lane highways, past the orange roofs and blue spires of white-walled buildings, past the icons of the past, where Washington and Lincoln view the nation, and posterity views FDR’s dedication of the third face on Mount Rushmore; past the Black Hills of South Dakota, bullet-style headlights paint the night silver and gold.

Past the rust and stardust, two aristocrats ride the current.

The past has a second act.