The Pride of the Great North Woods

Itching to buy a Joey B. Lax-Salinas photo. 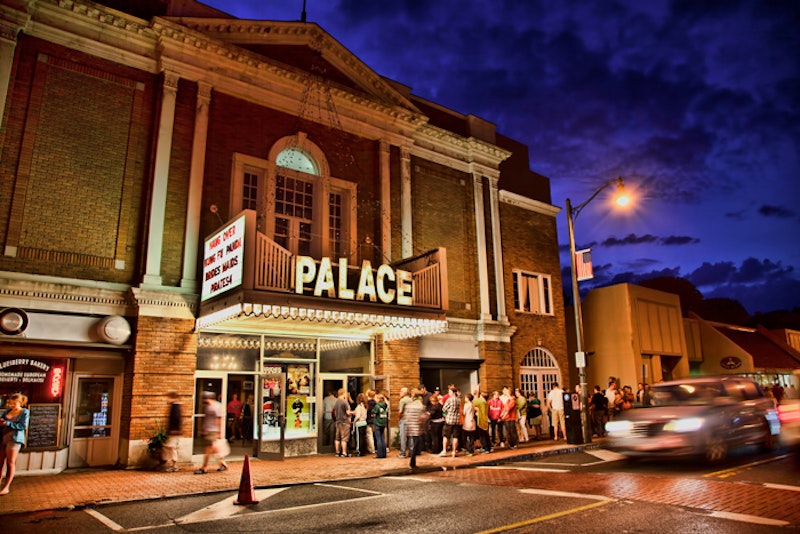 I've wanted, for a long time, to buy a picture taken by Joey B. Lax-Salinas, a photographer from Northwest Indiana. It's a shot of the Palace Theater, my hometown cinema in Lake Placid, New York. Lax-Salinas snapped it while on an East Coast road trip in the spring of 2011. Dusk has fallen; a crowd stands in line under the glow of marquee lights; cars whiz down Main Street, slightly out of focus. As someone who grew up in the Adirondacks but has since moved away, it's a beautiful scene that fills me with nostalgia. The only fault with the photograph that I can see is the unappealing selection of films advertised—The Hangover Part II, Kung Fu Panda 2, Bridesmaids, and Pirates of the Caribbean: On Stranger Tides.

The Palace Theater, once marketed as "The Pride of the Great North Woods," first opened in 1926. It has a working pipe organ, harkening back to the days of silent film. The interior walls are stenciled with Art Nouveau designs. Reggie Clark, who also owns the town's funeral home, bought the cinema in 1963 and has owned it ever since. Whenever I return to Lake Placid and manage to catch a movie, I frequently find him accepting tickets, dressed in a red blazer—just as he did during my childhood. I've interviewed him and his wife many times while working for local newspapers. I'd love to pick his brain and write a book-length history of the theater.

As a film buff, all cinemas feel sacred to me, but this is especially true of the Palace. When I was a toddler and my parents went to the movies, my mother would lay me down on the theater floor, where I'd sleep through the presumably adult-oriented fare. As a young teenager who dreamed of becoming a stop-motion animator, I saw special-effects master Ray Harryhausen there at the Lake Placid Film Forum. In high school, the Palace was where I escaped parental supervision and went on dates. While I attended college, I worked briefly as a movie reviewer for the Adirondack Daily Enterprise, which secured me free tickets. For me, the Palace's history is so much more than its ties to the early days of cinema. It's my history too.

All of this brings me back to that photograph. I'm married now and live in a different state. As I start a new life, I want to decorate the walls with something from home, a piece of my past. Lax-Salinas' shot of the Palace Theater's brick exterior represents that for me. So I plan to save my money to buy a print and a nice frame, which I can hang in our den. It’ll probably be expensive, but it's worth it.