It’s been forever since Baltimore’s Fells Point was still “funky.” 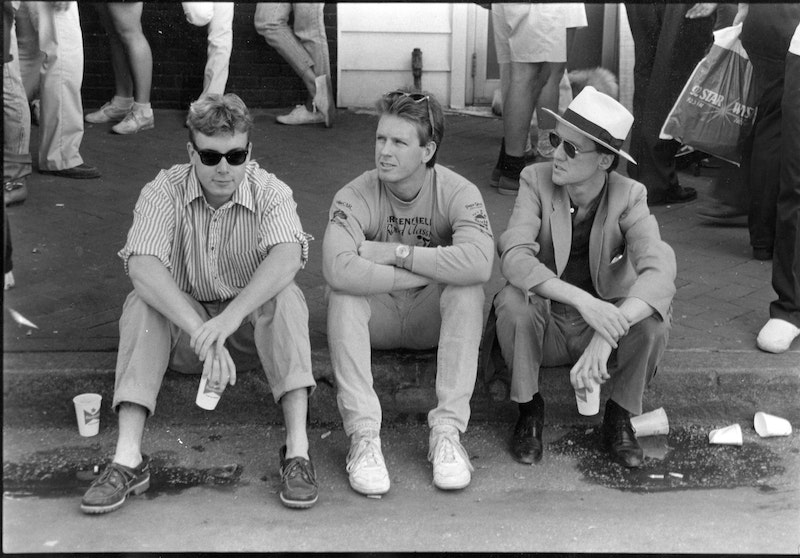 Last week an acquaintance of mine prefaced a Facebook post of an engaging photo with the words, “I don’t care for the click-bait headline, but…” I responded, half in jest, “In 10 years, clickbait will be remembered as real journalism.” In reality, headline writers always pushed for the clickbait gold, long before that word was invented, and not only in tabloids but all newspapers. A headline’s supposed to summon a reader’s intention, get them to at least start a story. It’s worse now, true, since often the headline is completely tangential to the text that follows, but peering imperfectly into the future tells me that modern journalism will keep sliding down that hole to China.

In any case, I was reeled in by a headline last week from a website I peruse occasionally, The Baltimore Brew, if only because it appeared so silly. “In funky old Fells Point, girding for Plank’s fancy new hotel,” it read, and, incredulous at such an inaccuracy, I did take in the entire story. I mean no disrespect to the freelance writer, Jason Policastro, who’s probably young, but Fells Point, the historic East Baltimore waterfront neighborhood, hasn’t been “funky,” by my reckoning, for several decades now. In fact, it hasn’t been “funky” since “funky” was a word in everyday conversation.

The impetus for the story was the opening of Under Armour CEO Kevin Plank’s new hotel—Sagamore Pendry Baltimore, a joint project between one of Plank’s companies and the California concern Montage Hotels & Resorts—on the site of the old Recreation Pier on cobble-stoned Thames St. Baltimore Brew is a local website—often a very good digital version of a community newspaper—so I’m not sure why this sentence was included: “Fells Point’s seedy charm has attracted celebrity habitués like filmmaker John Waters and the cast of NBC’s ‘Homicide: Life on the Street,’ which used ‘the Rec Pier’ as the 1990s show’s police headquarters.” Do tell! I don’t know the exact demographics of the Brew, but know that it doesn’t skew exclusively to those under 30, so it was (no doubt unintentionally) condescending to its readers, who are well-acquainted with John Waters’ early days as a filmmaker and don’t need a tutorial. It’d be the equivalent of a New York City website calling the long-spruced-up East Village a “sketchy” neighborhood.

It’s a strange story. Given the headline, you’d expect a volley of anti-gentrification warriors fighting a losing battle and getting their complaints aired (much like the “open space” citizens who protested the plans for Harborplace in 1978), but most of those interviewed—retailers and residents—didn’t seem too pissed off. In fact, the requisite saucy (and funky) barmaid at the staple Cat’s Eye Pub said she was optimistic that the hotel would bring new customers into the joint. Last Saturday I spoke to the manager of a small café and he, too, welcomed the anticipated influx of tourists. Business is business, as has been the case in Fells Point for a long time now.

In Baltimore, Kevin Plank—by many accounts of those acquainted with him, kind of a prick—is controversial and didn’t help his “brand” recently with his on-again, off-again support of Donald Trump. So he’s a magnet for news stories.

Like all neighborhoods that become gentrified, the transformation of Fells Point started slowly and then—I’d pinpoint the late-1980s—it’s a quick monkey-see, monkey-do rush of condo and hotel developers, trendy restaurateurs, and the dreaded sports bar. I remember friends telling me after I’d moved to New York in 1987 that Fells Point was now a mini-Georgetown, a particularly vicious pejorative considering the rivalry between Baltimore and D.C.

I first saw Fells Point in 1966 as an 11-year-old visiting my brother Doug, an undergraduate at Johns Hopkins, but those memories are dim and besides I’m sure I missed all the good stuff. But as a freshman at Hopkins myself in the fall of ’73, my roommate and I, on the first day, walked from Charles & 34th Sts. down to Fells Point—except for the not-quite-dead Block, it was a dark journey, with nothing open, street lamps busted, no one in sight—and it was happening. The drinking age in Maryland then was 21, as it is now—although for a brief period, starting in ’74 it was lowered to 18—and we got tossed from several bars, until we found a side street hole-in-the-wall where we had several mugs of beer.

The picture above is from the 1986 Fells Point Fun Festival—that’s my City Paper colleague Granville Greene on the left (Granville’s book The Mezcal Rush was just released) and me on the right, as captured by John Ellsberry—and on the occasion of the Festival’s 20th anniversary it had already taken on the inevitable generic feel, with the professional sausage and funnel cake hawkers outnumbering the local restaurants that had makeshift tables featuring their cooking right outside the entrances.

Anyway, I have no beef today with the current Fells Point—although who can blame longtime residents already swallowed up in pedestrian and vehicular traffic for rolling their eyes—and go down there every other week or so. But “funky”? That was a lifetime ago.