The Bad Dean Who Held a Grudge

Man, I pissed her off. 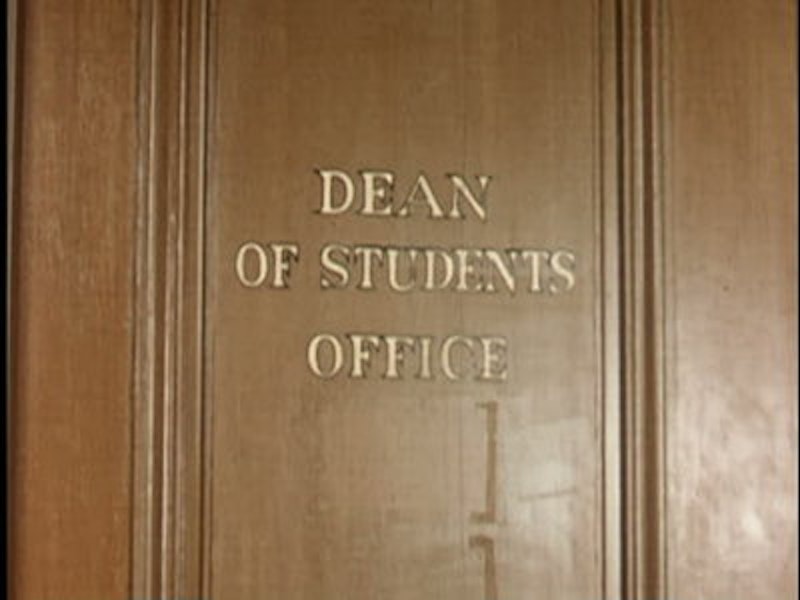 I didn’t know at the time. But years later I looked over events and saw the story. I realized what had played out: back when I was a kid, I’d caused affront to the dean and she took her revenge. The revenge was nothing big and neither was the incident that had kicked things off. Really, the dean and I had little to do with each other. I wasn’t that kind of student. I was never in trouble and wasn’t a high-flyer. I was a suburbanite rattling about without parents and high school, wondering how this big college had landed on top him. That’s the way I stayed my whole time at the university. Then I graduated, still wondering what had hit me. I’d gone through high school the same way.

I did, at a couple of points, try to change this attitude and get savvier. The biggest effort came as I finished my junior year. The backdrop was that I’d left college and now was coming back. My 12 months off were spent re-knitting my nerves—from what? from college life, I’m delicate—and ghost-writing YA non-fiction. Now, having recruited myself, I surged back. Achievement was on my mind. I’d get in the swim, grab a future for myself. This surge attitude was amped up by the first volume of Robert Caro’s Years of Lyndon Johnson, which tells of the young Lyndon and the mania he brought to his office work, the demonic force he brought to doing everything just the way the people in charge wanted. I’d read the book the month before going back.

One of my aims at school was to get something on my resume. I figured people who were going places did that. Hence I agreed to be the undergrad on the CORK review board. Why was I asked? I think I’d made a good impression back when arranging my year off. I’m an earnest, dutiful sort, along with being nervous, and my grades were good. As it happens, CORK turned out to be nothing much. I met with some middle-aged ladies and we looked at applicants’ folders. Eventually we, or the ladies, made recommendations about who’d get something. I don’t remember much about the process. The meetings were in mid-afternoon, maybe once every three weeks, and I’d show up between studying sessions at the library. I was hitting the books pretty hard.

The same as LBJ, I decided to leave no detail unaddressed. He’d been that way about office correspondence. I’d be that way about CORK. Really, I think no choice was made. A reflex kicked in, one that rode me all through that semester of my return. Normally I shirked, because I found life hard and had to measure out very small doses of the aggravation it dealt me. But that semester I plunged. My system kicked into reverse and I did all I could at every task before me. In the case of CORK, I read the applications in between meetings. I’d show up at the administration building, tell the ladies behind the desk what I was about, and then sit down with my folders and read through them. What I gained came to very little and may have been nothing. But I plunged that semester, so I did this thing too. Perhaps two or three times—after that exams and papers were coming.

The result was that one day the dean showed up at my elbow. I recognized her because she’d been hired the same year I came in, when I was a freshman. The new intake was assembled before her and she told us she hoped we’d be better people than the students back at her last job, a university in the Midwest. I rephrase what she said, but that was the gist. She was a woman of perhaps middle height, with goblin eyes and a cap of frosted hair. She was wiry and she boiled with the self-assertion found among lean, small goblin-eyed women. At the moment she wanted to know about me and those folders.

I won’t replay the scene, because there was nothing dramatic about the dialogue or behavior. The main thing to keep in mind was that I didn’t know what was going on. I didn’t know that she resented the sight of me looking at applicants’ folders. I thought that she wanted to know why I was looking at them. After all, that’s what she asked. I had my answer ready: I sat on the CORK review board and we dealt with these folders. The dean asked again, I answered again. My chief aim was to seem relaxed and engaged, to speak up clear and calm. My aim would’ve been the same when talking with a department store Santa. Back at that age, sadly, I’d have muffed the assignment. But at 21 I could do this much: speak up like a big boy and not waste the adult person’s time. So the dean asked and I answered. I thought I was doing okay, as far as I could judge these things; my form was solid. Yet the moment was stuck. Time had suffered a breakdown, and the dean and I couldn’t move forward.

Then she detached. I don’t know why. I guess three times were enough. My voice wasn’t going to shake, so she moved on, thwarted. That’s my present-day read on her attitude. I think she’d have been happy to see me crumple or wilt; that would’ve been mission accomplished. I denied her that. I also denied her a club to use against the dean who’d put me on the board. I didn’t raise my voice or make a face. I’d smiled and maintained eye contact and repeated myself like a self-possessed prisoner who won’t break. Not that I knew from breaking; my manners had me on autopilot, that’s all.

Eight or nine months went by. I’d racketed through my comeback semester and now was finishing the semester that came after. December had come and the kids were taking tests. This was a slight departure from previous years. The school had used to hold its exams in January, after the holidays. The kids preferred otherwise, and this year the change was made.

I was buying pens, possibly, in what might have been a small store off the university’s main cafeteria. I can’t say, all detail has vanished. But the place was public and busy, and it was around lunchtime. I was on my feet and facing, I think, a wall while examining something—possibly buying pens. A voice lifted behind me. The voice took pains to be distinct. “The students are all complaining because they didn’t prepare for exams to be so soon,” said the dean. For I looked over my shoulder, startled, and a few yards off there passed the dean. Trapped at her side, and looking flustered by her observation, were two office ladies, plump and fretful where the dean was whittled-looking and fiercely authoritative.

The crowd bore them away. Perhaps I bought a pen. A third of a century later, I guessed. She’d been talking to be overheard. She had a score to settle. By reasoning backward, I arrived at this: my encounter with her had played as an episode of cool effrontery. The sort of moment that schlubs like me moon over—fantasies where we cock an eyebrow and drawl toward the helpless authority figure—that was something I’d actually carried off without knowing it. Turn my life inside out and you can find such a moment, even such a moment in my bedraggled existence. At least as far as the dean was concerned.

My other thought is this: that school was expensive. The place isn’t the biggest deal, but it’s a big deal. It gets mentioned in movies when they want to show a character is hot stuff. And that school hired a dean who hated students. She thought we were a bad bunch and she stewed over our misdeeds. She looked for shots she could take against us. A series of well-paid people talked to this woman and decided she belonged in a position of authority over our school’s student body. I don’t know what I make of this, except that it’s inexplicable and plausible at the same time.