How I Felt in My First Skirt 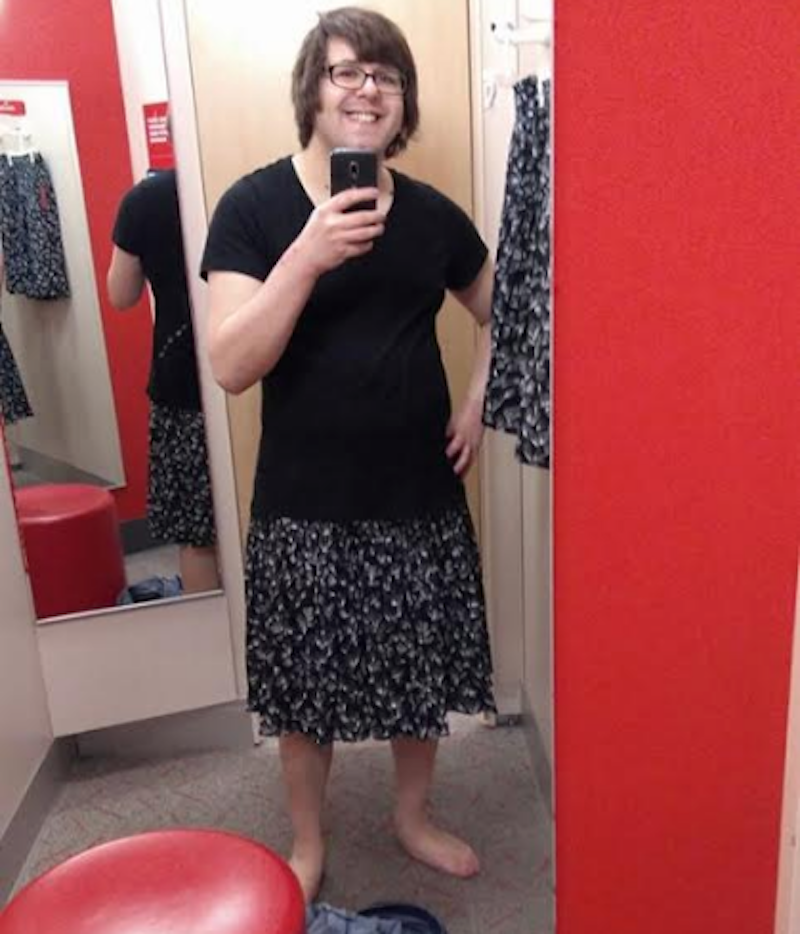 Even when I thought I was a cis straight man, I always wanted to wear a skirt. I’d look at women wearing skirts and how beautiful they were, and wanted to look just like them. But boys aren’t supposed to wear skirts, so I just brushed it off as some weird fetish I had.

All that changed this past weekend when I finally decided to give it a try.

Even though I’ve bought women’s clothes before, I still kept looking around to see if anyone was watching. I sprinted past the other women shopping and kept my head low so they couldn’t see my five o’clock shadow. I crept silently to the skirts and started looking through them until I found a black floral print that I knew would go with most of my t-shirts. I quickly stuffed a few different sizes into my basket, and then dashed to the dressing room. My heart pounded as I approached the dressing room counter, but breathed a sigh of relief when I found no one was there. I casually walked to an available dressing room, and then, with trembling hands, tried on the skirts.

Seeing my reflection, I thought, “I’m beautiful at last.” I twirled around and felt the way the skirt lifted and fell against my bare legs. I sat down and crossed my legs, and loved the way the skirt draped over them. I took a picture of myself and sent it to my friend Stephanie, a trans woman. She said I looked fabulous. After trying on a few sizes, I found the perfect fit, put my regular jeans back on, and then quickly put the other two sizes into the return bin before anyone saw me.

In the checkout line, I looked down at my shoes and hoped the guy at the register didn’t say anything about it. All he asked was whether or not I wanted to keep the hanger. In fact, I think he might have said, “Ma’am, would you like to keep the hanger?” I said yes, paid for the dress, and caught myself skipping across the parking lot towards my car.

I was the happiest genderqueer in the world until that night when I realized what just happened: I was one step closer to being open about my transfeminine identity, which meant the world had more reason to hate me. Up until that point, I just wore jeans and t-shirts (from the women’s section, of course), and occasionally painted my nails, so nobody gave me shit. In fact, when people did ask about my nails, I told them about me being trans, and surprisingly they were okay with it. I say “surprisingly” since I live on Maryland’s Eastern Shore, which has a very “I’m okay with it as long as I don’t have to see it” attitude towards LGBTQ people. Most people here have no problem with people doing whatever they want, as long as they keep it in the closet. Once you make it obvious that you’re transitioning, changing your name, and using a different bathroom, it becomes a problem. Plus, a skirt is the ultimate sign of femininity. Anyone of any gender can paint their nails, grow their hair to any length, and wear jeans. But even in today’s society, skirts are still women’s clothes, and if you’re read as a man wearing a skirt, you’re a faggot.

I woke up in the middle of the night contemplating suicide. The feeling continued when I woke up the next day. “You’re gonna end up being another name read during Trans Day of Remembrance,” the voice kept saying, “so just go ahead and get it over with.” I messaged Stephanie and told her what was going on. She told me to see a doctor right away, but I wasn’t sure. Finally I made a pact with her; I told her I was going to focus on getting chores done around the apartment, but if things didn’t improve, I’d seek emergency help. Fortunately things did improve, and now I’m back to exploring my gender identity.

As far as the skirt goes, for right now I’ll only wear it among certain company, like the local PFLAG group. One day, though, I hope I’ll be able to enjoy it in public without fearing for my life.