I can’t cut a slice of the pie and throw the rest away. 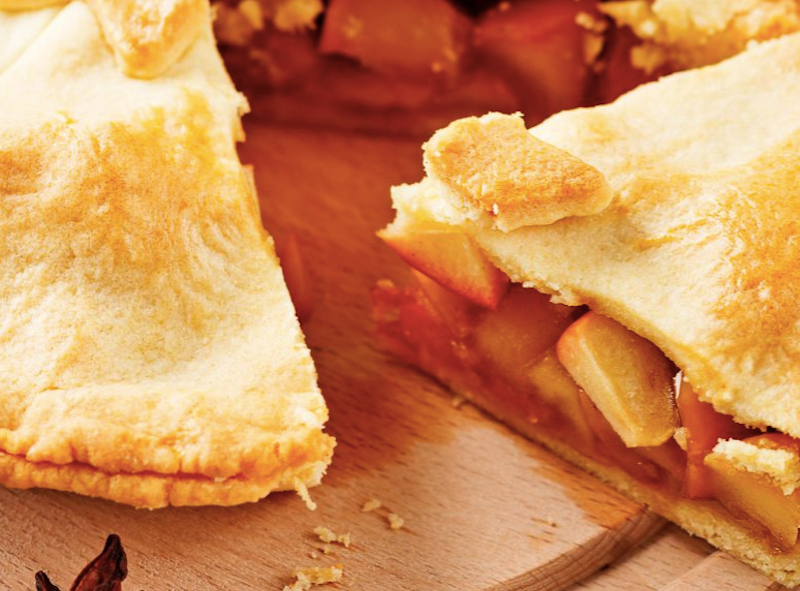 We got together with our neighbors last night. Dave and Vanessa, who live across the street, generously hosted us. They were grilling hamburgers and hot dogs. We brought a salad and a small assortment of cookies. Dave’s friend was asked to bring buns and baked beans, but he also decided to also bring two large apple pies. Our other neighbors, who live next door to Dave and Vanessa, brought a freshly-baked loaf of bread and a tin of double-chocolate and pecan cookies. Seated at the table were three couples and one adult male. Running around the table, back and forth to the inflatable bouncy house, were two little girls, ages three and four. Among the seven adults, two ate no desserts and one ate one small bite of dessert. That left four other adults, one of whom was yours truly, to consume desserts. Dave and I ate various cookies. Vanessa had some cookies. The friend ate one or two cookies. Our other neighbor, ate a few small cookies. The pies went untouched.

After eating, we corralled our daughter, said our goodbyes, and walked back across the street in the dark. Losing that hour of daylight really changes the feel of the evenings in November. In gathering our daughter and the matchbox cars we’d brought over, we left the salad bowl. After we got home, Dave asked if I wanted some pie. I said we’d forgotten our salad bowl and that a slice of pie sounded good. I told him I’d pick it up tomorrow.

This morning, I stopped by after walking the dogs. Dave opened the door and handed me the full pie, in its plastic container, sitting in the salad bowl. Confused and not wanting the whole pie, I begrudgingly accepted it. What was I to do, insist he cut only a slice? Dave clearly wanted nothing to do with this pie.

I live in a house with someone who doesn’t eat sugar and a very picky four-year-old. Our two dogs would gladly eat a slice of pie, but we refrain from giving them sweets. In fact, when we moved here in 2014, we found a small apple tree bearing many ripe apples. We cleaned, skinned and chopped apples and baked a pie. We left it to cool on the counter. The older dog managed to knock it down and eat the whole thing, which led to some incredible bloating, and two anxious dog parents. We tried to get him to vomit up some of it. He ambled around like an awkward cow for an hour or two, desperately trying to poop. Eventually, we all survived, though we enjoyed none of the pie ourselves.

I invited Dave and his three-year-old over for a cup of coffee. Our daughter is at preschool for the beginning of the week. We chatted for about an hour. About kindergarten applications and the previous night’s dinner. He said his friend wasn’t supposed to bring the pies. In fact, his friend had refrained from eating almost any dessert, and said he’d spent the last six weeks eating no sugar. Working for two years in a dialysis clinic surrounded by diabetes patients made an impact. The friend is on a temporary nursing assignment nearby. Dave and Vanessa are both nurses, though Dave does more administration these days. He met his friend when they were temporarily assigned a nursing job at an ER in Compton many years ago. The friend brought the pie for everyone else, as did the neighbor who baked the double-chocolate cookies, as did my partner, who brought the assortment of cookies.

I can’t cut a slice of the pie and throw the rest away. I grew up in a house where: 1) Sweets were limited. 2) Food wasn’t wasted.

If I froze the pie, I’d have to let it thaw in order to cut a slice. I suppose I could’ve pre-cut the pie into eight slices and then individually wrapped them, but who wants to spend 10 minutes doing all that?

I chose to take one big square Tupperware container and scoop out the pie, leaving the crusty edge. I scooped and mashed the gooey apple center and the top of the crust into the Tupperware. Now, I’ll control myself and warm up a reasonable amount each night for the rest of the week. By Thursday, I probably won’t even want any pie.