Thanksgiving in the family, then and now. 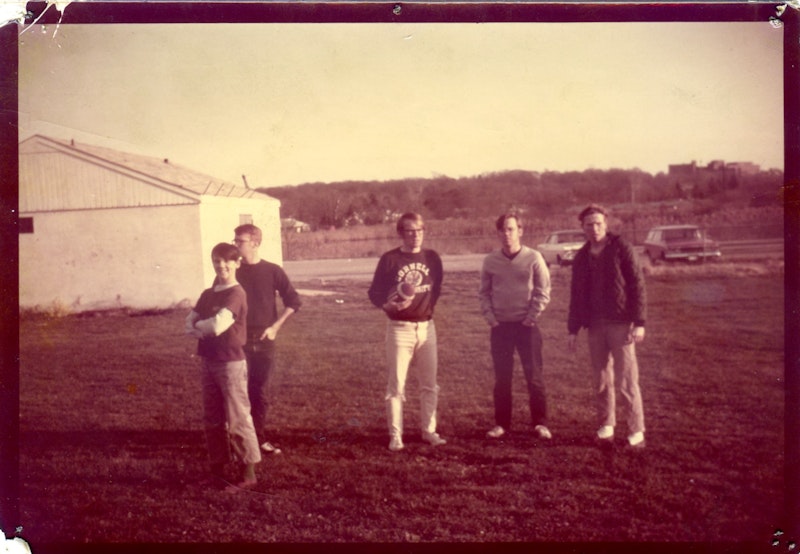 Thanksgiving, 1969: The above photo of my four older brothers and me, snapped by our dad at Mill Dam Park in Huntington, New York, is my favorite from a long-ago youth. (It’s certain this image has surfaced on social media in the past 10 years, and if that means I’m an online recidivist, call the dogcatcher and he’ll slap on the cuffs.) It was a gloomy day that Nov. 27th, but no snow and judging by our ratty clothes—my hand-me-down sneakers, brown with mesh, would make a mint today for some footwear entrepreneur—probably not too cold. It was the last Turkey Day Classic for our family—my brother Doug was in Afghanistan on a hitch with the Peace Corps a year later—a mismatched touch football game (two oldest vs. two youngest, with Doug, middle child as a floater and dad as the ref) that for the first time was a nail-biter.

I’ve no memory of anything from that holiday save the game, although my mom (as I’ve noted previously, a disinterested cook) laid out a carbon-copy Thanksgiving spread, which we all loved, including the “fancy china” that was used just twice a year, a weird, if common, practice, including a big-ass turkey, mashed potatoes, perfunctory Pepperidge Farm stuffing, rolls, pickles, frozen squash gussied up with marshmallow, Jell-O salad, a tube of cranberry sauce, celery, excellent gravy, occasionally a baked ham, a bowl of walnuts, Brazil nuts and pecans, cracked open with an instrument that looked like it was from 1890 or so, and three or four pies. In legitimate Norman Rockwell-style, Dad carved the perfectly-roasted bird, and as “the baby” I always got first choice of meat, which was a leg. As I recall, there was usually a scuffle over the wishbone, but mostly for bragging rights with no baloney about wishes coming true.

Wine hadn’t yet been discovered in our household, so it was probably cocktails and beer; I was too young (14) to openly even sip on a bottle of Schmidt’s. It was Mom’s best meal of the year (Christmas dinner was second; only because so much else was going on) and she didn’t complain a whit about cooking or the lackadaisical clean-up help from her sons, who retired to read or watch football. Dad, glad for the day off from work, half-heartedly tried to rouse us into the kitchen, but mostly it was him and Mom, and I think they liked the joint-duty, a break from the rapscallions lounging in another room. Our mother’s only gripe about the holidays was that with so many people in the house, the hot water in the two bathrooms was scarce, hence a “one-minute” rule for showers.

Thanksgiving, 2021: Bless us Lord, for we have forsaken the tradition of eating turkey and pretending to savor the leftover sandwiches for days on end. Maybe some people really do like leftovers—I mean, it’s possible, in the cold-pizza-for-breakfast tradition, which I’ve not once indulged in, unlike my younger son Booker—but my doubts are woven into the Horn of Plenty. My wife, our two “boys” (they’re 29 and 27) and I watch a movie together, toss around some political bullshit, and later in the evening nosh on a charcuterie platter, and some sushi, that Melissa assembles each year. It’s relaxing, and in deference to au courant lingo, we won’t “cross state lines.”

Thanksgiving, 1969: Just a smattering of political talk at the dinner table. My parents voted for Nixon the previous year, sucked in by his “secret plan” to end the Vietnam War (which, fortunately, all four of my brothers escaped); Mom and Dad didn’t object one iota at Doug’s plan to vamoose to Canada. As it happened, just a few days later he was the fortunate recipient of #356 in the first Vietnam draft lottery, so he was off the hook. They were generally conservative, and that included conserving the lives of their children. Mom gabbed at the Peyton Place-like gossip and scandals in the neighborhood; an accounting of school grades for the younger boys was mandatory; and the older boys, married with kids, filled everyone in on their careers. And there was always rock ‘n’ roll to discuss at length. The Stones were set to release Let It Bleed on Dec. 5th, and a few tracks surfaced on WNEW-FM. If the opening to “Gimme Shelter” didn’t give you goosebumps that year, you were barely breathing.

Thanksgiving, 2021: Today, there will be political banter, mostly about President Sippy Cup’s leaky boat in Washington; the CIA’s plan to effectively lull the public into complacency, which may or may not be successful; and the latest store closings in Baltimore. Booker thinks Trump will definitely run for president in 2024, I don’t, Nicky’s keeping his own counsel, and Melissa, disinterested in politics, hopes he doesn’t because his daily presence, with that corpulent figure and orange wig drove her nuts when he was in office, a time that’s way, way back in the rearview mirror.

I have no truck with the cliché “Life was simpler back then,” (“back then,” or more annoyingly, “back in the day”) because it’s not true. People worked, or didn’t; America was divided politically and culturally, although states weren’t given a color; racism was rampant, as was anti-Semitism; pedophilia was common at churches (like Hollywood today) and in the Boy Scouts, although I never noticed any evidence of it in my Troop 12; and city-like crime was creeping into the suburbs.

One difference—mentioned because it’s in my bailiwick—is today’s media, which willy-nilly throws out misinformation (and often disinformation) like peanut shells. Newspapers, magazines and TV definitely weren’t “objective” or completely truthful in 1969, but in 2021, as I mentioned last week, I can’t find a single near-unimpeachable source. One example: I do believe the “supply chain crisis” is real, but look at any news reports and you see stories about how Christmas will be all about homemade crafts (“And isn’t that a super-nice thing,” a cable host will say) and turkeys will cost $100. I bought the story: but last week, Booker and I went, way in advance, to the local nursery to pick out a Christmas tree, fearing slim pickings. Glad we did, and secured a mid-December delivery date, but there was a full array of very handsome trees, maybe the best batch in several years. And out of curiosity, at a Safeway here in Baltimore the other day I looked at the bin of frozen turkeys. Price: $.99 a pound.

The silliest story about inflation was a Nov. 12th MarketWatch article that “average Americans” were paying $90 for a bottle of wine, $5 for a gallon of gas and $200 a ticket for concerts. The reaction on Twitter was quick and scathing—people from all over the country, for example, cited what they paid for a decent wine—that the website was forced to retract its lead sentence. But not until Nov. 20th. Now, that’s 2021!