In praise of polytheism. 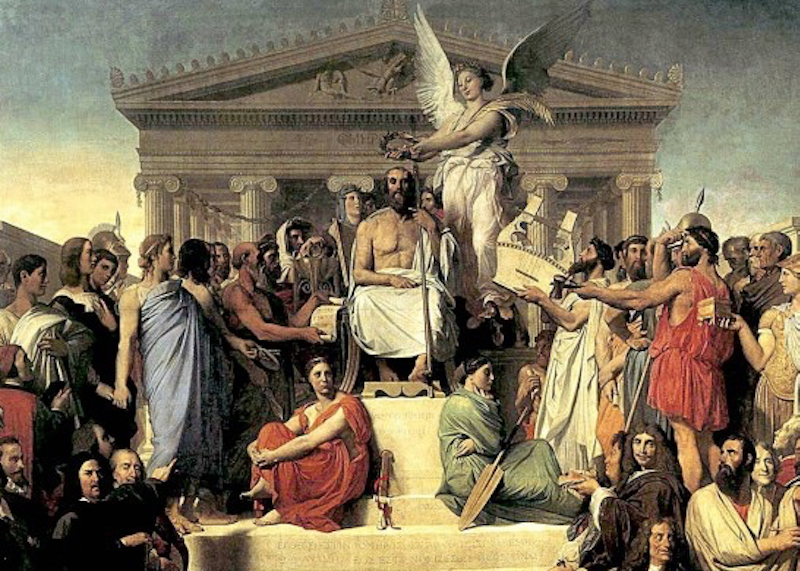 Sigmund Freud’s final book, Moses and Monotheism, is a weird confection. Part history, part psychoanalysis, part projection, it trolls through the Biblical narrative like an analyst questioning a patient, looking for symptoms of a repressed trauma.

As he says: “Mankind as a whole… passed through conflicts of a sexual-aggressive nature, which left permanent traces but which were for the most part warded off and forgotten.” It’s these neurotic traces, these symptoms, he claims, which explain religion.

He begins by suggesting that Moses may have been a high-born Egyptian, perhaps one of the exiled supporters of the disgraced Pharaoh Akhenaten who’d attempted to introduce the monotheistic worship of the Sun god Aten into Egyptian society. Moses, he says, is an Egyptian name. It’s from “mose” meaning child, and is a patronymic, meaning it’s usually attached to another name to indicate who the person’s father is: as in Ra-mose, Rameses, child of Ra.

The argument’s convoluted and difficult to follow, involving two people conflated into one historical figure named Moses, the adoption of the Jewish tribe by an Egyptian priestly elite, the displacement of the Sun god Aten by the Volcano god Yahweh, and the murder of Moses on the borders of the promised land, which Freud interprets in his usual psychoanalytical manner. You get the feeling that Freud identifies with Moses. Just as Moses is the father of monotheism, he implies, so is he the father of psychoanalysis.

It’s a preposterous argument, as even he seems to acknowledge by the tentativeness of the writing. He’s constantly breaking off his line of reasoning to admit he doesn’t really know what he’s talking about: presenting us with examples from history that are mainly speculative, and then paralleling these with interpretation of symptoms from neurotic patients—another form of speculation—while apologizing for the paucity of the evidence. Much is a rehash of his earlier book, Totem and Taboo.

In his defense, he wrote parts of the book while under threat of Nazi invasion, and the rest while in exile in England. He must’ve been under immense strain, even as his powers of reasoning were diminished by age and ill-health. The book was finally published in the summer of 1939, as the world was gearing up for the onslaught of the Second World War, just a few months before his death.

One of his suggestions is that the idea of the invisible God, as it was first promoted in the Mosaic religion, represents the triumph of rationality over the sensual. As he puts it: “It signified subordinating sense perception to an abstract idea.” Later he says that this reflects the replacement of matriarchal culture by patriarchal culture. “This turning from mother to father... signifies above all the victory of spirituality over the senses, that is to say a step forward in culture, since maternity is proved by the senses whereas paternity is a surmise based upon a deduction and a premiss.” In other words, the idea of monotheism is the beginning of abstract thought. He might be right.

What’s certainly true is that it represents the first time in recorded history that the sense of the sacred had been withdrawn from the world and banished to a place beyond. God is no longer with us but removed to another realm; no longer the companion of our daily lives, but an aspiration, an ideal, something we can only hope to meet at the end of our lives, after we do the right amount of genuflecting, sacrifice and prayer. It represents the moment when humanity and the divine become separated.

It’s interesting that he thinks that the shift from matriarchy to patriarchy is a step forward in culture. This shows his bias. We’re currently living in overwhelmingly patriarchal times. It’s old men who rule our world, their laws that control us, the laws of privilege and private property. The word privilege is from the Latin. It means private law. Laws are there to protect the interests of private property against the historic rights of the people.

There’s a parallel here, between the privatization of spirituality—God withdrawn into his secret realm where only the priestly elite can speak to him—and the privatization of property, with swaths of the planet fenced off for the profit and pleasure of a privileged few. Where once we were free to roam, we find fences blocking our way. Where once we freely worshipped at the shrines to beauty that nature offers, we now find ourselves spiritually bereft, cut off from the earth, unable to express our sense of place in the world. It’s the earth that nurtures us, feeds us, inspires us and gives us our sense of identity.

Our world is diminished by private property. It’s not only that some very rich and powerful people—like Bill Gates, who’s buying up the planet at an alarming rate—own much of the world, and use it as their own private fiefdoms, therefore cutting us off from the places that could nurture and sustain us, it’s also that our sense of who we are is diminished. If our sense of identity comes from our relationship with the earth, then the person who owns no land is reduced by that fact, while the large land-owner is inflated. Neither’s in a healthy position.

There’s an abstraction too in how the relationship is expressed. The tenant farmer may work the land, he may till and feed it and plant crops and nurture it. He may harvest the crops and take them to market. He may build his house upon the land and bring up his family. He may fix fences to protect his animals from predators. He may hunt and shoot and fish upon the land. He may sit in quiet contemplation in the stillness of the evening, watching the moonrise over his fields, but if someone else owns the land, then he can be kicked off at a whim. The deeds to the land lie in a lawyer’s safe somewhere, abstract and invisible, until the owner wants to use them. How like the Lord God of ancient Israel this is, the invisible God in his Holy of Holies, hidden behind a curtain, locked up in a box. And how like, too, the way that modern Israel has dispossessed the Palestinians.

The ancient world was full of gods. Every grove, fountain, river, crossroads, city, and every mountain had its god. Every home had its shrine. Goddesses were as important as gods in the pantheon of the divine. Every cult had its practice. So Vesta was a flame, and her priestesses were virgins, while Pan was the god of fertility and his symbol was a phallus. Mithra was worshipped in underground temples that let in no light, while Janus was a two-faced god who reigned over doors and transitions, gates and contradictions, ends and beginnings. Gods were places and states of mind. Gods were forces and principles. There were small gods and large gods and gods in every nation. Greek and Roman historians spent much of their time comparing the gods of the different countries, trying to work out which of the foreign gods corresponded to their own. It was an exercise in bilateral relations. The gods were everywhere.

It’s not that the Greeks and the Romans had no private property—our property laws and privileges are derived from Roman law—but there was also a highly-evolved sense of public space which corresponded strongly to sacred space. Where the gods were, there the people were welcome to gather, and the temples were the guardians of the public sphere. Most of what we now call the Arts began in the temples. Western theater has its origins in Athens, as a ritual offering to the wine god Dionysus. Painting and sculpture were originally employed to decorate the temples and bring the gods to life. Those white marble figures of the Greek and Roman world, so admired today, were originally colorfully painted. Music has its origins in the sacred rites, as an accompaniment to rituals held at public places of worship. All of this derives from the feeling that some places have a special character, a personality, which can be expressed in artistic form, and which people take to be sacred and worthy of worship.

Monotheism, on the other hand, leads to monopoly and singleness of thought. It leads to monoculture and the domination of the planet by an elite. It leads to monism, the idea that whole of the universe is the single expression of a single thing, whether you think that’s God, or matter. Materialism is monotheism in a different form. It’s the first step in the creation of the ego, that mental device that separates us from the rest of the universe.

According to Genesis, the Biblical name for God means “I am that I am.” The “I” is repeated twice here. This is the ego speaking. The ego makes the world in its own image, just as God does. Instead of the vast array of individual beings, each with its own character, the world’s seen as the product of a singular being, represented in a singular way. In Judaism, as in Islam, there’s a ban on any representation of the divine. This is replaced by worship of the text. In Islam, calligraphy replaces representation as the principal art, while in Judaism the Torah scroll is paraded around the synagogue like a sacred object of worship. In Christianity one of the gospels declares the Word to be the beginning of all things. Language has taken the place of reality.

This is a reflection of that voice we hear in our heads, the one that’s interminably commenting on every experience, at every waking moment of our lives. How often do we find ourselves caught up in a narrative that’s so all-consuming that we’re lost in it? Sometimes we can be startled by the presence of another person who seems to have crept up on us. But they haven’t really. The reason we didn’t notice their approach was that we were so lost in thought that reality had almost disappeared.

How much more so the world of nature, the plants and the animals that we share our planet with? We’ve placed everything “out there” as an object to be exploited. We’ve objectified the world. We’ve silenced nature so that we can no longer hold a dialogue with it. Nature speaks a different language than our own. The rustle of the wind through the leaves, the rippling of the stream, the sounds of the birds calling, all of it gets blocked out by the much more interesting conversations we have with that voice in our head.

Panpsychism suggests that the world’s a place of consciousness and not matter. The world’s alive, and it thinks. Polytheism is the acknowledgement of the world in all its diversity of form, in all its sensual presence, in all its various disguises. The gods are everywhere, it’s just that we’ve forgotten what their names are.