There he stands in what was once known as the Court of the Astronauts. 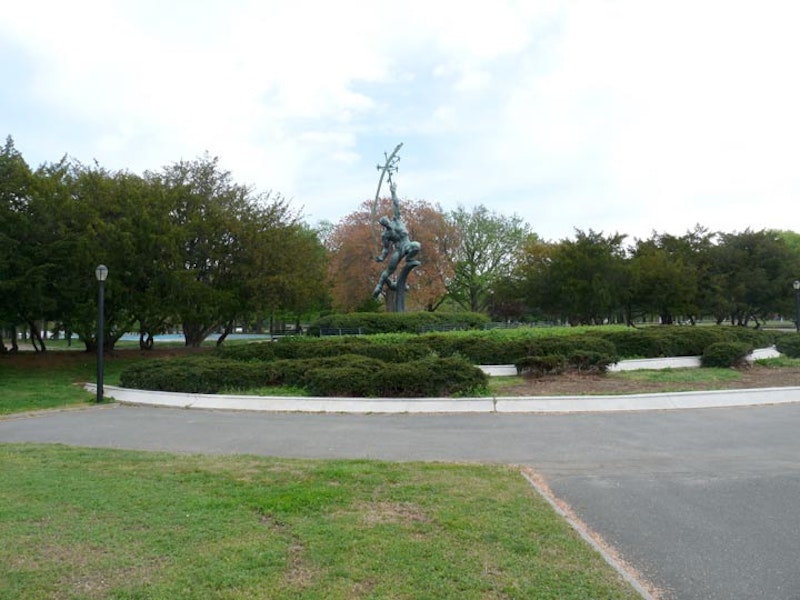 There he stands in what was once known as the Court of the Astronauts, his back to the Fountain of the Planets and facing the Unisphere. Rocket Thrower is one of a number of statues created for the 1964 World’s Fair that had flight or space travel as a theme. The heroic-style sculpture depicts a giant throwing a rocket (in his right hand) through a network of stars (in his left). After the Fair opened in ‘64, reviews of De Lue’s sculpture were mixed. New York Times art reviewer John Canaday called it a “most lamentable monster, making Walt Disney look like Leonardo Da Vinci.” Time, however, treats massive public works with kindness. The Eiffel Tower received similar opprobrium when it was first built as well. 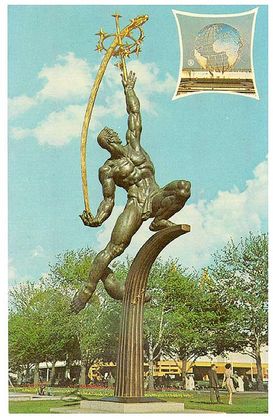 In this postcard view, Rocket Thrower appears in his original bronze finish, and gilded rocket and stars. I attended the Fair in person, but my memories have faded and are more in the abstract. The monorail, the Pieta, the feathered orange hats, the Belgian waffles, the oddly-shaped lampposts that looked like the Rubik’s cubes that followed them, nonstop plays of “It’s a Small World” and in 1964, Beatles, Beatles, Beatles on radios everywhere.

When Donald Fagen of Steely Dan had a hit with “I.G.Y.” (referencing the 1957-58 International Geophysical Year) in 1982, he wasn’t talking about the New York 1964-1965 World’s Fair in Flushing Meadows Corona Park in Queens, but with its elegiac references to now-forgotten or never-attained dreams of the future, he might as well have been. 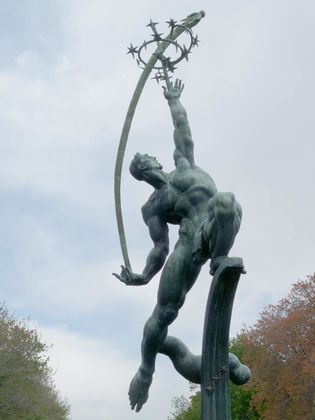 The World’s Fair was dismantled after the 1965 season, but a number of buildings and sculptures have been preserved, such as Rocket Thrower, the Hall of Science, Forms in Transit, and Freedom of the Human Spirit. The Hall of Science remains a popular attraction for kids of all ages, and the scale model of New York City contained in the old NY Pavilion is one of the city’s better-kept secrets.

The sculptures and statues, though, have been left on their own, and oxidation has had its way, turning their bronze a ripe, light green. The original Rocket Man had a recent refinishing and while he doesn’t carry his original bronze patina, he looks better than he has in years.

If you’d like to see Rocket Thrower “up close and personal” street coordinates are impossible, so this is an easy way to find it: From the #7 train at Willets Point, walk south on the boardwalk over Corona Yards and the Long Island Rail Road and descend a ramp to the Passarelle Plaza, which has a number of flagpoles and mosaic tablets surrounding it. Take the path to the left in the photo at top. Notice the yellow fire hydrants on the right as you walk the path. At the second one, turn right and walk straight ahead through the trees, skirting the playground on the left, and passing the Masonic George Washington statue (also by De Lue) on the right. Rocket Thrower will soon be in view.