Do it on Mundy 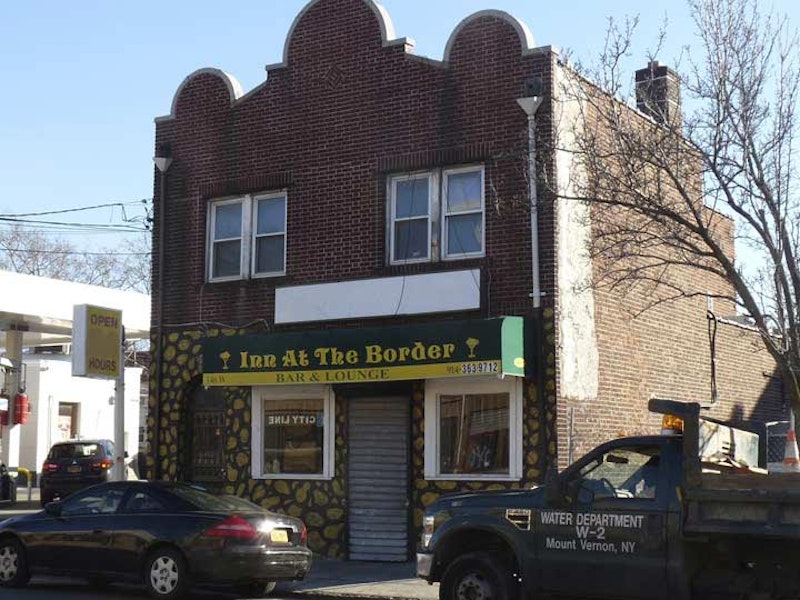 For this January lidlifter on the exploring season I took the IRT #2 train, easily accessible from Penn Station, north to the Nereid Ave. station (mispronounced NAIR-eed by the taped station announcements; the street is named for a former volunteer fire department—they typically took mythological water names like Neptune or Oceanus; a nereid was an Aegean water nymph and is pronounced NEAR-ee-id) and headed north on White Plains Road, edged gingerly into Mount Vernon and then along the border of the Bronx and Westchester Counties and eventually, back to White Plains Rd. We’re in the neighborhood called Wakefield.

The Bronx-Westchester border was much different until 1895, when it was redrawn to give all of what’s now in the Bronx east of the Bronx River to New York City. Today the border remains irregular, running along streets here and between streets there, above E. 242nd St., above Cranford Ave., along Mundy La. (a crazy boundary—see below) and then east, an irregular jog north, and then east just above Pelham Bay Park (but not along its northern edge; west of the New England Thruway there’s an odd bit of business in which Park Drive, along the north edge of Pelham Bay Park, is in the Bronx but all the intersecting streets issuing north are in Pelham Manor) reaching the Long Island Sound between Hunter and Glen Islands. 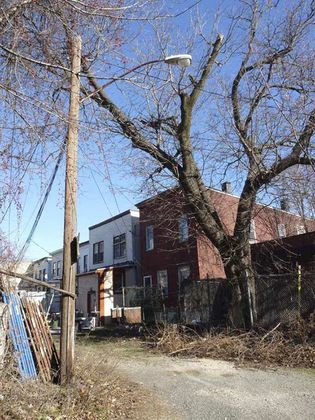 One of the reasons I went up to Wakefield on a chilly January afternoon was that I wanted to get new photos of an unmarked street that I know from maps as Garden Place, which is unmarked by the city.

The street, which is in the midst of a city block and can be accessed only by a driveway (on very old maps called Walkly Place) on White Plains Rd. between E. 239th and E. 240th Sts., has never been represented properly on printed or online maps, which insist on connecting it to E. 240th St. It may have indeed intersected E 240th at one time in the past but that connection has long since been severed.

Garden Place is the last remnant of a turn of the 20th century real estate development called South Vernon Park. There’s a single streetlamp on Garden Place, with an additional one behind the barriers that may or may not work anymore. Garden Place has a gravel, not an asphalt, pavement job. There are four homes on the east side of the street, and one on the west, and it dead ends on the north and south, with only the driveway connecting it to the rest of the Bronx. 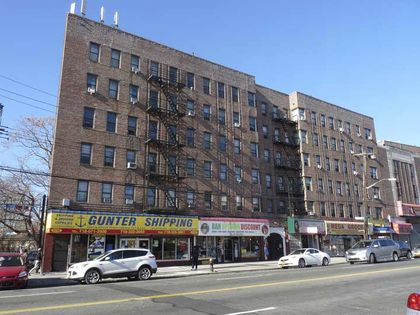 White Plains Rd. was first laid out in 1863 as far south as where Pelham Parkway is now and was extended south in the early-20th century. It became part of NYC, along with everything else east of the Bronx River, in 1895 when that portion of Westchester County was ceded to NYC. 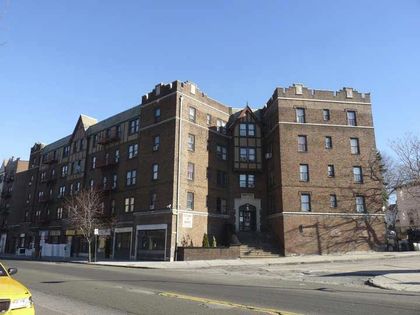 You’d be wrong to make such an assumption. Mount Vernon, NY was named by Anne Hutchinson in the 1600s for the elevated grounds in the area rich with vegetation, hence “green mountains.” Vermont also is derived from French for green mountains, les verts monts. Wakefield, meanwhile, was named for the plantation house in Virginia where George Washington was born in 1732; that house burned down in 1779. 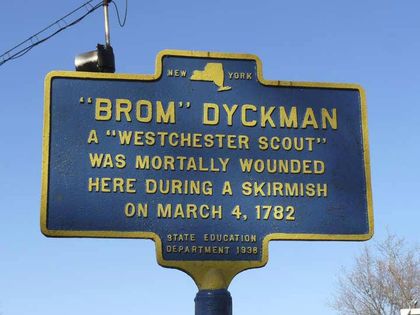 A small park at W. 1st and South 11th Ave. is marked with an original 1938 NYS Education Department plaque (when these can be found in NYC they are often badly maintained and in need of a paint job).

Abraham “Brom” Dyckman, a member of the prominent Dyckman family that still has an extant farmhouse in Inwood, was a member of the Westchester Guides, a paramilitary unit assisting General William Heath in attacking Tory strongholds in Westchester County. At this spot, Dyckman was mortally wounded on March 4th, 1782 while attempting to capture Loyalist Colonel James DeLancey, who was commanding several Tory units and made his headquarters here. 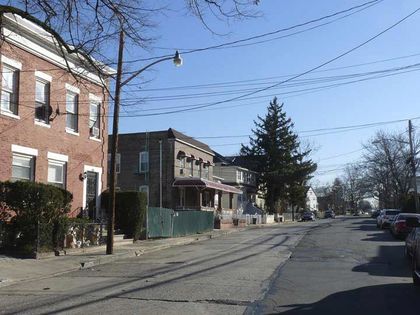 Here’s where the Bronx-Mount Vernon border really gets nutty. The city line reaches South 11th Ave. midway between W. 3rd St. in Mount Vernon and Cranford Ave. in Wakefield, and then makes a right turn and goes down the center of the road, which in New York City becomes Mundy Lane (named, according to the late Bronx historian John McNamara, for funeral director Bernard F. Mundy; McNamara also explains that Mundy Lane is a cutoff section of Mile Square Rd., an ancient road in Yonkers).

But is it really that clear cut? Does South 11th Ave. “become” Mundy Lane? Not exactly. Between Cranford Ave. and Nereid Ave. (Bronx)/W. 5th St. (Mount Vernon), the Bronx side is Mundy Lane and the Mount Vernon side is South 11th Ave. Bordering Mount St. Michael Academy between Nereid/W. 5th and Pitman Ave., both sides of the street (in Wakefield and Mount Vernon) are called Mundy Lane. Between Pitman Ave./W. Sandford Blvd., it’s Mundy Lane in Mount Vernon and Seton Ave. in the Bronx. Finally, before the city line cuts east, the road is called Seton Ave. on both sides between Bussing Ave./West Kingsbridge Rd. and Edenwald Ave.

These distinctions are made on no print maps I’m aware of, and the normally detailed Google Maps ignores them. No question, this is the strangest New York City borderline. In most sections, the difference between the Bronx and Mount Vernon are different, as each side has different street lighting and paving than the other as you can see in the above photo. 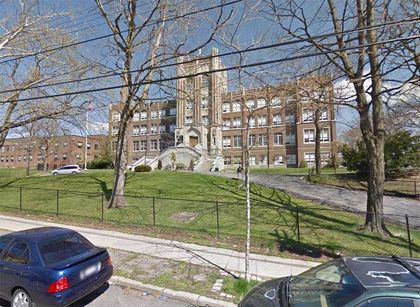 Seen here on its Murdock Ave. entrance, the Mount Saint Michael School (boys grades 6-12) occupies a large plot, much given over to athletic fields, between Nereid, Murdock and Pitman Aves. and Mundy Lane. The school was founded by the Marist Brothers and opened in 1926, with the main building shown here completed in 1929. A large pond was filled to construct the football field. Among the school’s alumni are 1950s Knicks star Richie Guerin and rap mogul Sean “Puffy” Combs. 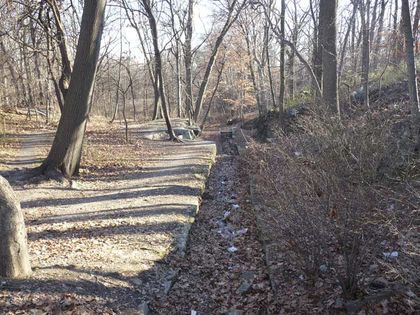 Seton Falls Park is an irregular 35 acres between E. 233rd St. and parts of Marolla Pl. and Crawford, Seton and Pratt Aves. Though dwarfed by Pelham Bay Park (NYC’s largest park) and Bronx and Van Cortlandt Parks, it’s the largest park in the immediate Wakefield-Eastchester area. It stands on land once inhabited by the Siwanoy Indians, Thomas Pell, and the Seton family, one of whose members was Elizabeth Bayley Seton (1774-1821), the USA’s first canonized saint (1975). It has been formally a park since 1930, with further additions in 1932, 1983 and 1985. The east end of the park bordered on parts of the Bronx’ last frontier, as some of the streets were not laid out and built on unto the end of the 20th century.

The territory was once watered by Rattlesnake Brook, which is still captured in a concrete culvert in the park’s valley. After a dry period, the brook was nowhere in evidence when I visited, but a blizzard and several other storms occurred in the following weeks, so the brook may be trickling again. 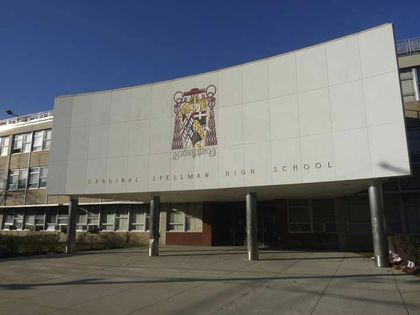 A modern classic, Cardinal Spellman High School on Needham Ave. between Grace and Baychester Aves. was dedicated in 1962 by the person for whom it was named, Francis Cardinal Spellman (1889-1967), a controversial prelate who was Archbishop of New York from 1939 to his death. Spellman was a close advisor to Franklin D. Roosevelt and an ardent anti-Communist throughout his career, breaking a gravediggers’ strike at Queens’ Calvary Cemetery by installing seminarians in their place; he also supported Richard Nixon over a Catholic, John F. Kennedy, in 1960, citing Kennedy’s opposition to federal aid for Catholic parochial schools, and was an ardent supporter of the Vietnam War. In a book review, The New York Times called Spellman “guileless and Machiavellian.” 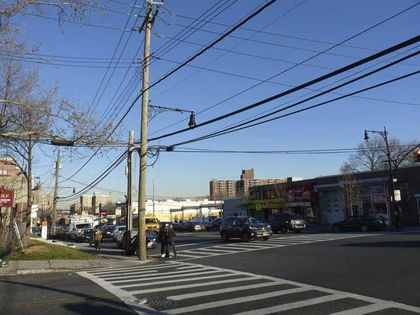 Boston Rd. and Grace Ave. The road begins in Morrisania, at 3rd Ave. and E. 164th St., and roars up to the city line at Ropes Ave. at Pelham Manor, and, as US Route #1, goes all the way to Boston. However, within NUC confines, this was never part of the older Boston Post Rd.

According to Bronx historian John McNamara, Boston Rd. was constructed by surveyor John B. Coles in 1794. It’s a re-route of sorts of the original Boston Post Rd. Lewis Morris, an early Bronx landholder, wanted the Post Rd. to run through his property for his legacy and hired Coles to build a southwest extension of the Post Rd. Early on, the new road was known as Coles’ Boston Rd. North of what would become the Bronx-Westchester line, the two roads converged and continued north. Further north, the Post Rd. would separate into more tributaries, each reaching Boston via a separate route. In that era, what takes a few hours by car took a few days by horse or coach.