Oscar Spate and His Chairs of Madison Square Park

On the Rocking Chair Riot of 1901, when New York City was sweaty and soporific. 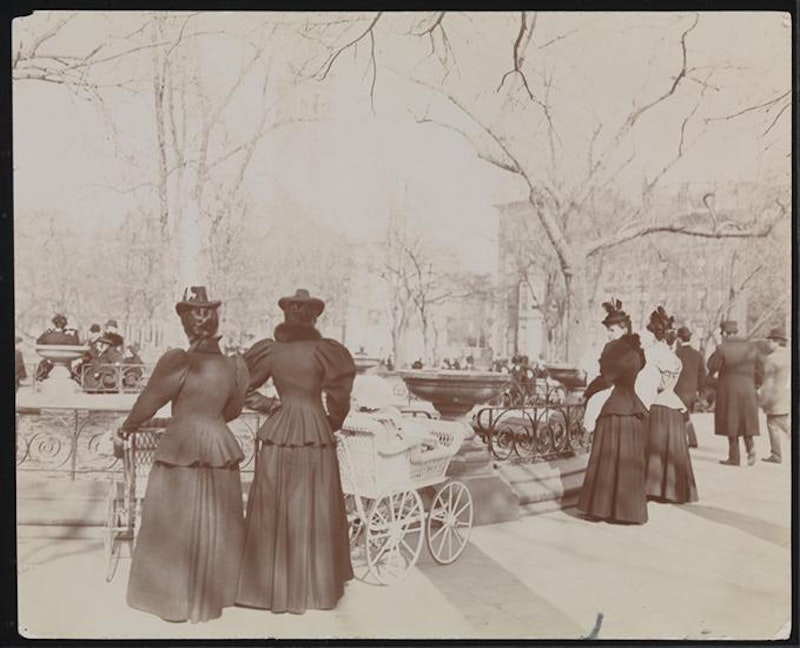 My home was in the Kingsbridge section of the Bronx for a number of years, and the jobs I held were either in midtown or in lower Manhattan. I rode the IRT #1 train, until I could recite the stops, backwards. With a small amount of vocal spacing, my parlor trick looked like I was reciting an instantly memorized, entirely random set of numbers, as opposed to station names along the subway route. As my ability to fleece bosses for higher wages improved, I graduated from the subway to the luxury of the express bus, which got me home in about the same amount of time, but, late at night, was safer and a bit more comfortable.

The bus stop closest to my social stomping grounds was on the corner of 26th St., at the north end of Madison Square Park. Just west of the corner of 26th and Madison was a bench. The average green wooden slat, pebbled concrete frame park bench. It was there I invented stories of park visitors who came long before. I’ve come to learn that benches in Madison Square Park have quite a history.

The park, named after the fourth American president, opened for Manhattan residents in May of 1847. In 1863, the park housed thousands of soldiers, brought in to keep the peace during the draft riots. But the brouhaha the park is most known for happened just after the turn of the 20th century.

The early summer of 1901 in Manhattan was soporific. The temperature hit at least 95 degrees every day from June 26th through July 3rd. A man known as Oscar Spate, whose real name was Reginald Seymour, made a deal with the Parks Commissioner, George Clausen. Spate sold Clausen on the idea that both Madison Square Park and Central Park needed chairs for people to sit in. Both parks did already have some benches. Clausen evidently believed that cane-bottom chairs were popular in London (there were none) and the Commissioner signed a five-year contract with Spate, for $500 a year.

Early in July, visitors found what benches there were had been moved from underneath trees out into the sun. New chairs occupied the prime shady real estate. Along with the chairs came attendants, men hired by Spate to collect rent when people sat on his chairs. The cost was five cents.

The chairs were really nice. They came with green cushions, and most were rocking chairs. But a tariff for sitting had never been enforced before, and in the shade or not, people didn’t like the idea. Representatives of Spate’s concern, the Comfort Chair Company of London, watched the chairs and collected the nickels. Clausen is said to have agreed to the plan, at least in part so that the ladies and gentlemen of the neighborhood wouldn’t have to occupy benches alongside some of the city’s less desirable folk.

The chairs quickly became unpopular. People began sitting in the chairs, and when approached by an attendant, they refused to pay. A college student named Abraham Cohen was arrested by a policeman when he held out, and when an onlooker laughed at the situation, the cop arrested him as well. The crowd that gathered to watch was solidly on Cohen’s side, and the controversy made the front pages of New York’s papers. Cohen and the “cop laugher” were both let off the hook in court, but the judge ruled that, due to the contract in place, Cohen was still obligated to pay, in order to sit in a Spate chair.

William Randoph Heart’s Evening Journal brought suit against Spate’s chair company, alleging that the contract itself was illegal. An additional lawsuit came from Cohen, the student, for false arrest. The Spate attendants went to New York’s finest to help collect their rents, but the Police Commissioner, Michael Murphy, directed his charges not to arrest Spate antagonists.

This animosity grew to the extent that one day an estimated thousand people chased a Spate attendant out of the park, and across 5th Ave., until the attendant dashed into the Fifth Avenue Hotel. The Times reported that the crowd yelled, “Lynch him!  Kill him!” Some in the mob overturned the Spate chairs and threw them into the Avenue, where oncoming traffic destroyed them.

By July 11th, Clausen understood he had a problem and, at a press Conference at the Plaza Hotel, stated that he felt it was his job to “bow to the public will,” and annulled the contract. He said the City would purchase the remaining chairs, and their future use would be limited to women and children.

That evening, an estimated 10,000 people gathered in or near Madison Square Park, not to riot again, but to celebrate the victory for the common man. The Evening Journal arranged for bands to play and a fireworks display

Spate had lost, and sent his son and others to gather the chairs from the park. He then sold them to Wanamaker’s, which advertised in newspapers, “A Sale of Historic Chairs."