The Musical Legacy of Humpty Dumpty

From garage rock to soul to hip hop with our round friend. 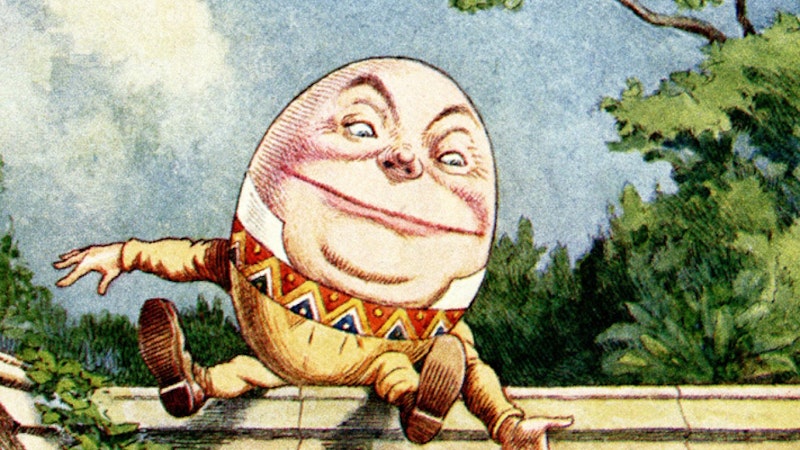 The nursery rhyme “Humpty Dumpty” was one of the more surprising literary works to provide inspiration for pop music in the latter half of the 20th century. Garage punk, top 40 rap, soul, teenbeat, and bubblegum records have all paid tribute to the egg-shaped fairy tale legend. Unlike most protagonists, Humpty Dumpty is celebrated because he’s destroyed. His destruction represents a gorgeous spectacle, a moral victory that signals triumph for a society desperately yearning to escape from the tyranny of cold calculation and perfectionism.

The Epics (1967): Fuzzed-out power chords and slashing arrangements electrify this hellish track, the lone Love Records release from Walnut Creek, CA’s Epics. Spearheaded by singer/songwriter Bobby Winkelman (known for his later work with pre-Journey psych-heads Frumious Bindersnatch and The Steve Miller Band), this northern California crew emerged from the San Francisco suburbs to conquer the local teen scene with a painful sonic power. Both sides of their single rank among the best West Coast punk tracks. The record’s raging intensity is mainly inspired by the cycle of events that lead to Humpty Dumpty’s inevitable collapse. Winkelman makes this especially clear during the cut’s slow burn ending, one of 1960s-punk’s most explosive conclusions.

Several other teen rockers cut their own manic “Humpy Dumpty” anthems during music’s British Invasion. The best of these include Hanna-Barbera-inspired crew The Beagles (whose “Humpty” also includes blasting fuzz guitar, as well some frenetic Harold McNair-ish flute lines), “Humpty Dumpty Was Making Out” by southeast beach party unknowns The Malibus, Texas band The Visions’ organ-blaring fairy tale tribute, and the odd bubblegum garage of Pittsburgh legends The Fenways; their “Humpty” also got a great rendition from fellow Pittsburghers The Vogues (of “Five O’Clock World” fame).

This soulful 60’s girl group record is a charming love song about Humpty. Obscuro Joan Berry re-contextualizes the character’s legendary plunge as a symbol of undying devotion. The lyrics imply that a shambolic personality could spark the ideal love affair, a relationship that could never be dull. With Humpty Dumpty’s passionate embrace there would never be any great struggle to “spice up” the romance.

"The Humpty Dance" by Digital Underground (1990): There’s no direct connection between Humpty Dumpty and the lyrics of this rap mega-hit. Regardless, its title alone makes it the most famous track to give the character even a vague reference. In many ways the topsy-turvy spirit of the original fairy tale lives within the absurd lyrics and mythology created by Digital Underground and their leader Shock G, muted alter ego of D.U.’s outrageous comic hero Humpty Hump. G.'s genius as a performance artist was best embodied by an innovative deconstruction of the traditional rapper image. In a time when politically charged/positive hip-hop and menacing gangsta rap ruled the airwaves, Humpty brought a needed respite from the hyper serious posturing of his contemporaries. Little is more antithetical to dogmatism and criminal braggadocio than Humpty Hump’s deep fried nose, his Groucho glasses, his big furry hat, and his immortal proclamation “I once got ‘busy’ in a Burger King bathroom!”