One-quarter of the city’s residents live within a mile of the river. 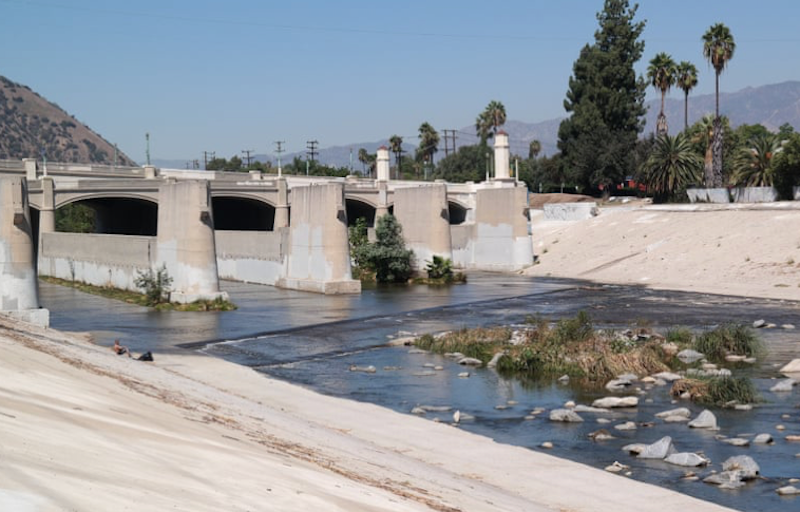 The Los Angeles River looks more like a concrete sewer. It starts in the Simi Hills and Santa Susana Mountains and then cuts through the San Fernando Valley passing Van Nuys, Sherman Oaks and Studio City. It flows beneath freeways, past train yards, through Griffith Park and downtown before moving toward Long Beach where it merges with the Pacific Ocean. The river is 51 miles long and carries 60 million gallons of water a day. One-quarter of the city’s residents live within a mile of the river.

The L.A. River was once called the Río Porciúncula. In the late-1700s, the indigenous Tongva people established 45 villages along the river’s path. They fished for steelhead trout, hunted small animals and gathered acorns from abundant oak trees. The reeds in the river were so thick it took days for the Tongva to cross through them. After the Mexican-American war in 1848, the local population exploded as Americans migrated west. The L.A. River was the primary source of fresh water for the city but could only support about 250,000 people.

When the first Los Angeles Aqueduct was completed in 1913, it became the city’s main source of fresh water. Locals began using the L.A. River as a sewer system. They tossed human waste and dead animals in the water and, at times, dead bodies.

In late-February 1938, two severe storms hit the San Gabriel Mountains. A year’s worth of precipitation fell in a few days. The L.A. River broke its banks and flooded the county destroying 5600 homes and businesses. 115 people were killed. Some communities were buried in six feet of mud. Warner Brothers Studios was surrounded by a moat of water and the 1938 Academy Awards were postponed.

Los Angeles made the decision to cover the L.A. River in concrete to speed the flow of floodwater to the sea. The federal government passed the Flood Control Act of 1941 and tasked the US Army Corps of Engineers with overseeing the project. Dams were constructed and 280 miles of streams were encased in 3.5 million barrels of concrete. The project took 30 years to complete. Water in the L.A. River flows year round. It comes from mountain creeks and wastewater treatment plants based in Burbank, Glendale and Los Angeles. At some points the river’s dry while at other spots the river is deep enough to support fish and exotic bird populations.

In 1985, writer Lewis MacAdams founded Friends of the Los Angeles River to restore the river to its original state. In response, the US Army Corps of Engineers declared the river unsafe. A group of citizens kayaked the river from Canoga Park to Long Beach proving the Corps of Engineers wrong. Kayaking is now permitted in two sections of the river: in Elysian Valley near Dodger Stadium and in the San Fernando Valley near the Sepulveda Basin Recreation Area. River activities include picnicking on the trapezoidal riverbanks, biking on freeway-adjacent bike paths, bird-watching and fishing. Birders search for blue heron, sandpipers, mergansers and grebes. Animal sightings include deer, racoon, possum, bobcat, coyote and rabbits.

Fishing is permitted with the purchase of a state fishing license. Catch-and-release is recommended due to high pollution levels. Fish species include bass, catfish, blue gill and carp. Local fisherman use colorful names to describe the invasive carp like “sewer salmon,” “dumpster dolphin,” “Tijuana trout” and “gutter groupers.” The last native fish caught in the L.A. River was a trout in 1940.

The river’s closed when E. coli levels get too high. A color-coded system monitors bacteria levels: red means the riverbed is closed with levels twice the federal safety limit. Yellow means proceed with caution. Green means levels are below the federal limit. The water has a noxious methane smell year-round. Swimming’s never permitted.

Other pollutants in the L.A. River include ammonia, heavy metals, algae, oil, pesticides, insecticides and volatile organic chemicals. L.A. River mosquitoes have carried the West Nile Virus. The County Vector Control District advises people who live within one mile of the river to wear long pants, long sleeves and use bug spray.

Friends of the L.A. River remove 25 tons of trash yearly. Trash finds include flip phones, old bikes, rolled-up carpets, 1980s-era computers and lots of shopping carts. According to Lewis MacAdams (who died in 2020), the strangest find was a bloody Santeria sword attached to handcuffs with red and green ribbons on the end. It’s not known if the blood was human or animal in origin.

Nearly every L.A. River overpass has a homeless encampment. Some have lived in the river for more than a decade. They carve out space among the reeds with a hacksaw and live with their cats and dogs. Some catch and eat fish from local waters while others grow vegetables, flowers and herbs. They wash their clothes in the water and scour the river for artifacts.

For many working-class neighborhoods, the L.A. River provides the only parks and recreation areas they’ll ever know. According to City Project LA, the percentage of non-Hispanic white people living near the river in Northeast L.A. has increased by 18 percent since 2006 even though the county has become less white over the same period. In 2020, architect Frank Gehry designed plans for a set of elevated platform parks and a riverbank cultural center. The intention is to develop green space for working-class neighborhoods. The fear is that these improvements will unintentionally lead to gentrification.

For 70 years, the L.A. River was viewed primarily as a way to rid the city of excess water. Today it’s all about revitalization. Whatever changes happen in the future, the L.A. River will be an iconic symbol of Los Angeles for years to come.