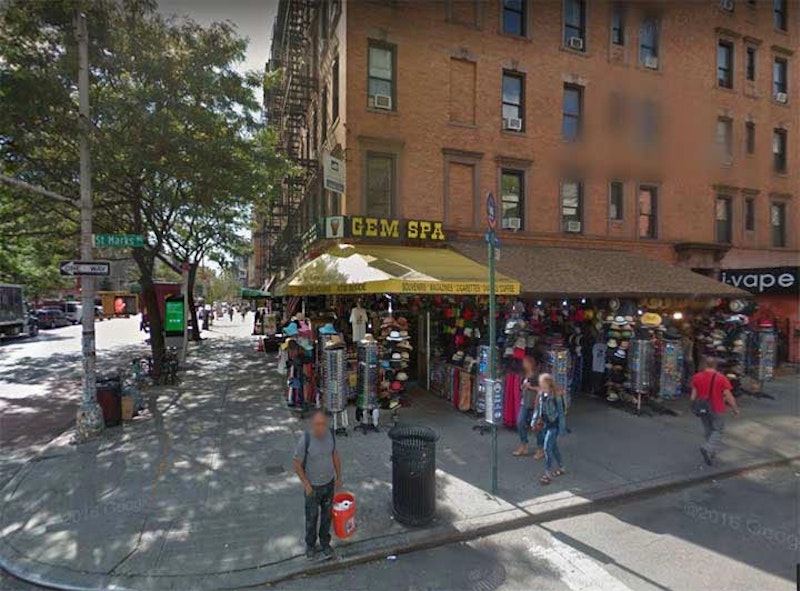 New York City’s famous for the hyper-rational, gridded street system that covers the vast majority of Manhattan. But there are some baffling exceptions. As you might expect in a nearly 400-year-old city, New York has some streets whose names seem strangely out of place. Here are six NYC streets that shouldn’t have their names.

St. Marks Pl. (no apostrophe) needs no introduction—it’s been the countercultural epicenter of the East Village for decades, though it has backslid into something of a tourist trap over the last couple of decades. One of its touchstones, Gem Spa on the corner of 2nd Ave., recently closed after several decades in business, a victim of higher rents and the pandemic. 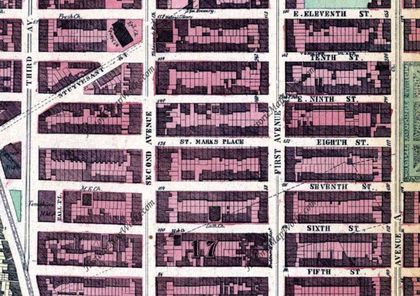 E. 8th St. was laid out along with its parallel partners in the Commissioner’s Plan of 1811; the street was cut through and graded in the 1820s. Development, in the form of the odd house or two, began at that point, but the first real concentration of homes didn’t occur until the mid-1830s, when developer Thomas E. Davis built groups of Federal-style brick houses along the present stretch. To attract potential buyers, he renamed E. 8th “St. Mark’s Place,” in honor of the nearby church. Davis’ aim was to build classy dwellings on large lots set back from the street, and renaming E. 8th St. for the church was one method to attract wealthy buyers. A couple of Davis’ original buildings still stand, including 20 St. Marks, the longtime home of the Sounds record store.

This Dripps map from the 1850s shows it with both names; St. Marks Place would win out west of Tompkins Square. There were other instances like this in the 19th Century: W. 8th St. was known as Clinton Pl., and uptown, a block of E. 50th St. was called Dunscomb Pl. A look at Kenneth Holcomb Dunshee’s As You Pass By, ostensibly a history of NYC’s 19th Century volunteer fire companies but also a compendium of Manhattan maps and street histories, provides plenty of these forgotten Places. You can probably find a copy in the library: that’s where I found it years ago, and obtained my own battered copy from a used book website. 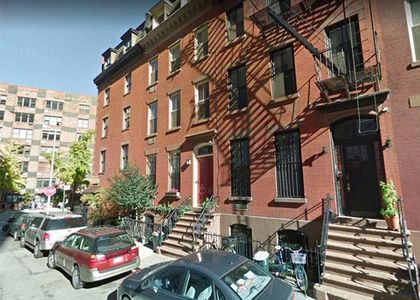 For much of its route through the East Village and Greenwich Village, East/West 4th St. behaves as though it were a normal part of the grid. After ceding its name temporarily to Washington Square South, W. 4th St. pushes west to 6th Ave. Then something strange happens. The street turns northwest, and keeps going and going. Along the way, it intersects W. 10th, 11th, 12th, and 13th Sts., violating everything you think you know about the Manhattan street grid. All these numbered streets intersecting seem to disprove the notion that parallel lines don’t meet.

There’s a reason this happened. The Manhattan grid doesn’t begin in earnest until 8th St. The streets below that, including W. 4th, 10th, 11th, and 12th, once carried names, not numbers. So before the 1850s, their intersections produced no head-scratching from out-of-towners.

In the very early 1800s, W. 4th Street was named for the nearby Orphan Asylum Society, which stood on Asylum St. between Bank St. and Troy St. (now W. 12th). The asylum was demolished in 1833, and soon after, the street was renamed W. 4th St. Only later, sometime in the 1850s, were the other streets—Amos, Hammond, and Troy, respectively—renamed W. 10th, 11th and 12th Sts., sowing confusion all around.

Streets in Long Island City have undergone a succession of names over the years. For example, the N train runs above 31st St., which, before the present Queens street numbering system was adopted in the 1920s, bore the names “2nd Avenue” and “Debevoise Avenue.” The Queens Topographical Bureau devised Queens’ current street numbering system in 1915. LIC’s numbered streets begin at the East River and go higher as you travel east.

There are a number of exceptions to the numbering, such as prominent roads like Vernon, Astoria and Northern Blvds. There’s an especially curious one, too: the presence of Crescent St., which is slotted in south of 24th St.. Because of Crescent St.’s various bends, however, 26th, 27th and 29th Sts. immediately follow it, depending on what part of Astoria you’re in. Those bends have preserved Crescent St.’s name, assuring that it doesn’t get a number.

Maps from the 19th century show a curved road called the Crescent between today’s 30th and 34th Aves., where Crescent St. runs today, and that slant is still in evidence, as Crescent St. is still not purely parallel to its brothers. Though it’s one-way (except for between 30th and Newtown Aves.), it’s a little wider than the rest, and can handle two lanes of traffic. Crescent St. has also been called Prospect St. in the past, and that original bend may have been meant to get around a hill that the name Prospect St. referred to. 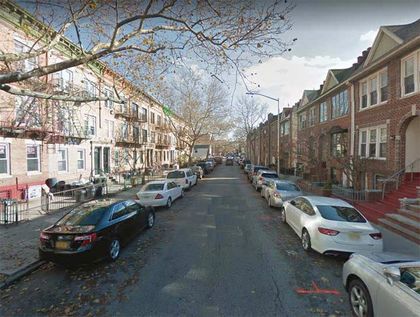 Senator St. runs from Colonial Rd. east to 6th Ave. in Bay Ridge, inserted between 67th and 68th Sts. However, it’s not continuous; the street jogs awkwardly in between 5th and 6th Aves., requiring a driver to make turns to stay on it.

Why would there be a named street inserted between 67th and 68th Sts.? The answer is that the orientation of the streets changes subtly at about 66th St. and 4th Ave. This causes an extra space to open up north of 67th St.. An extra street, Senator, was inserted by town planners to make up the difference. Without it, streets running east and west could keep the same number only with difficulty.

Senator St. was named for six-term New York state Senator Henry Cruse Murphy (1810-1882) a former owner of the Brooklyn Eagle newspaper and former City of Brooklyn mayor. He became a U.S. Representative from New York and an 1852 presidential candidate. His estate became today’s Owls’ Head Park, which is named for either Murphy’s gatepost ornaments or the shape of the peninsula it was situated on before its shape was altered by the construction of the Belt Parkway. 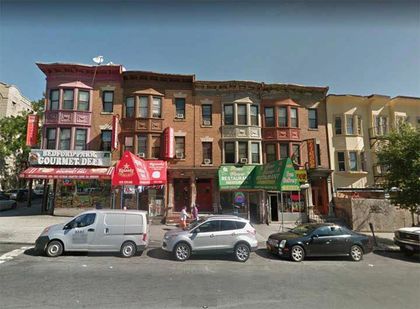 For unknown reasons, both boroughs have been resolute about not having a 200th St. In Manhattan’s Inwood, Dyckman St. takes the place of 200th, although the builders of the IND subway (now the A and C line) took some license and created “200th Street” tiled nameplates in the Dyckman St. station.

In Bedford Park, Bronx, 200th St. is replaced by Bedford Park Blvd. The name was in place by 1906. Why no 200th St.? Perhaps it was considered unlucky. No such fate has befallen Manhattan’s E. and W. 100th Sts. 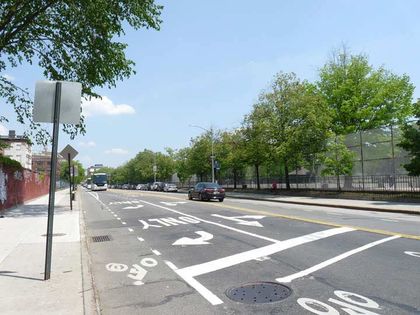 The first thing to remember about Flushing Ave. is that it doesn’t go to Flushing. In fact, it doesn’t come within five miles of it. Flushing Ave. takes its unusual name because of the relative isolation of Flushing, Queens. In the colonial era, marshy land and creeks cut Flushing off from traffic from the west, and because there were few good roads into Flushing, carts and coaches had to first go to Jamaica and travel north from there.

Initially, Flushing Ave. was a toll road built to be an alternative to the southern approach. It would eventually lead to Newtown (a large area known today as Elmhurst and northern Maspeth) and then to Flushing via the North Hempstead Turnpike (what is now approximately 63rd Rd.). Then this route went along either now-vanished roads (Strong’s Causeway, obliterated in the 1950s by the Long Island Expressway) or all-but-vanished roads (Head of the Vly Rd., now a short lane called Vleigh Pl.) into Flushing.

Flushing Ave. joins the tradition of NYC streets named not for the neighborhoods they’re in, but for the towns they lead to: Witness Boston R. in the Bronx, which leads to U.S. Route 1, which runs all the way to Massachusetts.

—Kevin Walsh is the webmaster of the award-winning website Forgotten NY,  and the author of the books Forgotten New York (HarperCollins, 2006) and also, with the Greater Astoria Historical Society, Forgotten Queens (Arcadia, 2013)