Two Plus Two is On My Mind

Why are all the right-wing extremists saying it equals four? 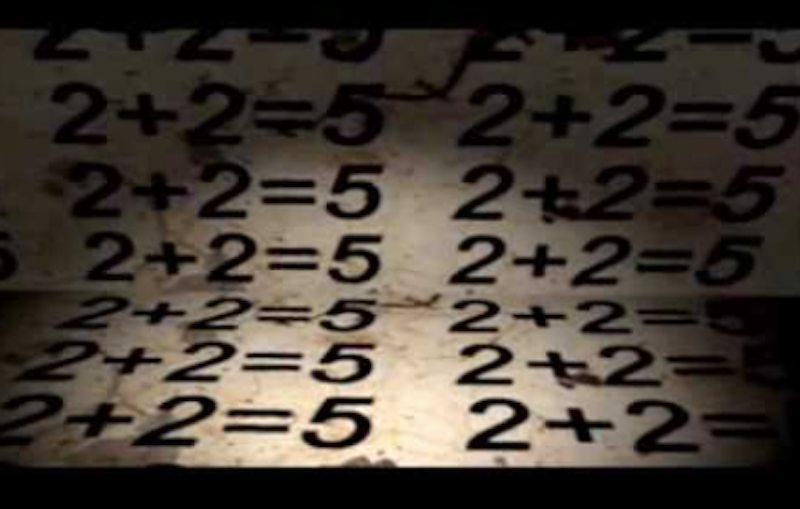 In 1813, Lord Byron wrote to his future wife, Annabella Milbanke: "I know that two and two make four, and should be glad to prove it, too, if I could, though I must say if, by any sort of process I could convert 2 & 2 into five, it would give me much greater pleasure." If the Romantic poet were still around, he might be pleasantly surprised to learn that some educated people would be telling him that he could do just that.

One is Kareem Carr, a former mathematician who’s currently a biostatistics PhD student at Harvard University. Carr, who once tweeted that scientists should be more concerned with serving society than with seeking the truth, recently caused a stir on Twitter when he started a thread with this: "Statements like '2 + 2 = 4' are abstractions." He went on to discuss people who might say, "I put a rooster and hen together and I came back a year later and there were three of them (1+1=3) or they might say I left a fox and a hen together and later I came back and there was only one (1+1=1)." These people, according to Carr, "are making a tremendously deep point."

"So when somebody tells me "2+2=5", proclaimed Carr at the end of his 16-tweet thread, "I WILL ALWAYS ask them for more details rather than just dismissing them as an idiot because maybe they're talking about chickens and turns out that's how chickens work!" One has to wonder if he also asks them for more details when they tell him that 2 + 2 = 4, since it's just an "abstraction." If so, his work as a statistician must be time-consuming.

You have to wonder how many people bought that chicken example. They reproduced, so 1 + 1 = 2 doesn't apply to them? It doesn't seem like a "tremendously deep" point, unless perhaps you've just taken a couple of bong hits of Grand Daddy Purple.

As most people's conception of 2 + 2 = 4 is rooted in a single point in time rather than an ongoing process that involves a future event, Carr got some pushback. One of the prominent naysayers was James Lindsay (co-author of Cynical Theories: How Activist Scholarship Made Everything about Race, Gender, and Identity—and Why This Harms Everybody), who has a PhD in math and is an outspoken critic of lax standards and the lack of objectivity in academia. Lindsay, apparently unmoved by Carr's chicken and fox examples, tweeted that Carr had yet to provide "a single, clear, convincing example where 2+2=5 makes any sense at all."

That's the truth, although Carr offered thoughts like this: "Mathematical statements like 2 + 2 = 4 when applied to the real world are always intermediated by definitional ambiguity, measurement uncertainty, ambient stochasticity, exchangeability assumptions and the limits of causal intervention such that it may sometimes occur that 2 + 2 = 5."

That sounds like a PhD student trying to mess with the heads of some undergrads by snowing them with esoteric language over drinks at the bar, but Carr's supporters came up with some imaginative examples to support his contention. One shared this: "There are two factories. Each factory has two fully operable machines, as well as half the parts to build another one. If the two factories were joined into one, and the two halves of parts were built together, it would be five total machines. A case of 2 + 2 = 5." Actually, it would be a case of 2.5 + 2.5 = 5.

Lindsay’s a Twitter lightning rod for proponents of progressive political concepts such as anti-racism and white fragility, so his rebuke of Carr's musings attracted considerable attention. Ellie Murray, assistant professor of epidemiology at Boston University, assessed Carr's 2 + 2 argument as "well-reasoned." She tweeted that Lindsay's a "right-wing extremist" who doesn't believe that black people belong in STEM, and that he promotes racism. Lindsay, in fact, isn’t even on the right. Nor does he promote racism or exclusion of black people from STEM. That's character assassination via falsehoods, but that's how today's progressives react when their ideas are challenged. But to do it in defense of 2 + 2 = 5?

It's disturbing, in the midst of this pandemic, that an epidemiological expert from a top American university would think that 2 + 2 = 5 is "well-reasoned." How are we supposed to trust anything she says in these difficult times?

Mathematics is normally considered the purest type of scholarship. Because it's entirely abstract, neither human biases nor political manipulation can intrude on its findings. That can present problems to activist progressives like Kareem Carr and Ellie Murphy who believe their job is to serve society rather than seek the truth. What angers them is that mathematicians are able to tell them they're wrong about their untested theories in a way that has nothing to do with culture, white privilege, colonialism, or any of the other buzzwords they rely on for their messaging. They can't have that, so what better way is there to undermine their science-based critics than to chip away at the foundations of their science? If we're willing to believe that 2 + 2 = 5, then they have us right where they want us.