The Groundhog and the Lotto

The lotto is like anything else: you got an itch, you scratch it off the ticket. 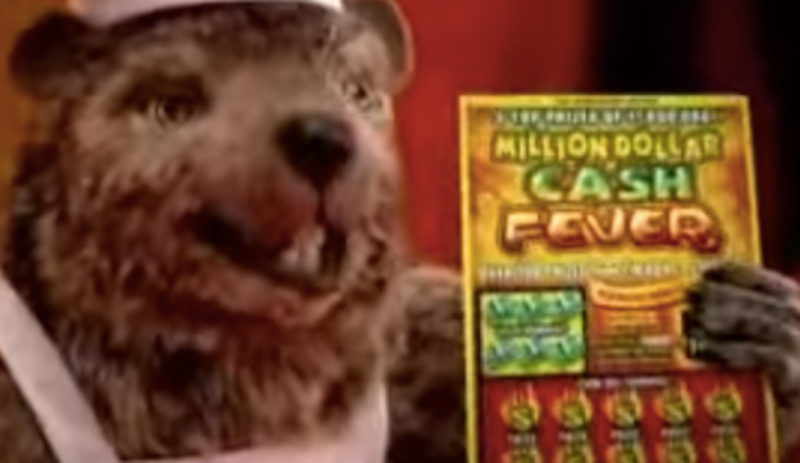 Over on the Left Coast the lotto commercials are artsy. My personal favorite has a dame, nice glasses, polka-dot blouse, pretty smile, who makes snow-angels while number-drawing balls fall gently around her. “Cree en algo más grande,” the screen says.

In Westsylvania, it wasn’t the size of whatever our customers believed in that mattered to us. We’d get the attention of the “trimmed suckers” the old-fashioned way. Remind them they got an itch and then give them permission to scratch it. “Keep on scratchin’!” the friendly groundhog always said. I read somewhere he was supposedly named Gus, but I didn’t call him that. “The groundhog” was how I thought of him. By the way, the friendliness was a put-on. As soon as the cameras were off, the groundhog was a real bastard. Control-freak type, short with the help, which was practically everyone back then. In his mind it probably still is. Plus, if some wisenheimer kid with a phone caught him waxing too poetic about his co-stars, there was always a slick attorney type on hand with a few free Powerball tickets and non-disclosure forms to make sure things were kept hush-hush. The point is, the lotto is like anything else: you got an itch, you scratch it off the ticket.

I started with the Westsylvania Lotto Commish—the West LoCo, we called it—in the pandemic’s early days. I was a newsman back then, working remotely and slinging daily updates from the eggheads in the Health Department. For all the statistics training I got as a newsman, I might as well have been pretending to interpret numbers on lotto tickets, but I didn’t buy those back then. I was a more straight-edge type. One day I was waiting for a digital briefing to startwhen a little birdie pulls me into a side chat room. I didn’t know what she wanted, but I’ve always been an easy mark when someone tosses me a winky-face emoji. In fact, I don’t even know if she was a birdie. But her profile pic was a chickadee.

“What’s so important, Toots?” I ask when the new tab loads. I watched the ellipsis flutter coquettishly on the screen till I got bored and made myself a coffee. Extra Irish because the cops can’t pull you over at 10 a.m. in your living room.

Instead of an answer right away, I get an eye-roll emoji. Then a winky-face. “Spill it,” I type. My coffee spills somewhere in between the “L”s.

She gives me a hot tip. Let’s say it has to do with the Lotto Commission. I smelled something, and it’s not just the whiskey I’m slurping off the keyboard like I’m Humphrey Bogart in a Best Buy. But I’m short on scratch so I go to the address she gives me. It’s a ramshackle joint with a sign that says MEME’s MARKET and a clerk with a t-shirt that says MEAT MARKET.

“Classy place,” I say through my mask. “Huh?” the clerk says through his.

“I’m here about the lotto,” I tell him. “I’m supposed to talk to Meme.” I thought I’d have to get physical with him when he pretended he didn’t know who I meant, but then it turns out the owner’s name is pronounced like “Me, Me.” He tells me she’s in back.

Past a cooler of sandwiches and down there’s a long hallway where a door swings open when I walk by. Inside a dame’s puffing a Juul in an easy chair. “Meme?” I say. “YouYou,” she replies. She adds a cloud of mojito-flavored smoke for emphasis.

“I heard from a certain someone on the Zoom,” I say. A real hot tip, and I want in,” I say to the cloud. The vapor dissolves as she says it isn’t up to her. “You need to meet the groundhog,” she said, taking more drags in between words. When the cloud dissolves again, he’s right there by her chair. The groundhog. He walks over to a wet bar in the corner and asks me if I want something wet and Scottish. “Nah. Kentucky bourbon,” I say.

“I’ve been known to nibble on the blue grass myself,” he says. I think he’s talking nonsense and then I remember I’m having a conversation with a rodent. He tries to wink but can’t close one eye at a time so instead he just closes both and looks meaningfully into mine. Meme looks at me as if she’s daring me to notice. I take the hint.

“I want to talk to you about the lotto,” I tell him.

Pretty soon I’m riding shotgun while Meme drives and complains about the prices of eggs and cold cuts. “How am I supposed to run a deli on that overhead?” The question, like her vape pen, is rhetorical. Anyways the money’s why she started hawking tickets on the side.

The groundhog wanted to drive but got sore when his paws wouldn’t reach the pedals. He sits in back and gives directions, mostly at the last minute, so Meme has to swerve across at least a lane of traffic every time she comes up on a turn. We’re riding toward the sun and it’s low on the horizon and there’s a glare.

Finally we get to another deli and go in through a side door by the alley. It’s dark until Meme flips on a light in the kitchen. She takes one more drag before she opens the door of an oven in the corner. The groundhog steps in, and at first I wonder if we came here to make woodchuck sandwiches. Instead, he starts climbing down a staircase. Meme does a half-crouch and climbs in. I follow them.

It’s dark at the bottom of the stairs so I follow the smell of Cuban rum, fresh mint and chemical additives across the cement floor. At some point, the groundhog flicks a cigarette lighter so I can see a door in the corner. EMPLOYEES ONLY.

He looks at Meme, who looks back at him. Then at me. Then at him. They both laugh. She brushes a lock of silver hair behind her shoulder. She laughs for a second longer than the groundhog and stands there grinning from the nose down when they’re done.

“A citizen,” I said quickly. The real answer wasn’t their business.

The groundhog shrugs and jerks his head toward the door like he’d be nodding if he had a chin. On the other side it’s set up like a crafting studio with two long tables and fake-wooden chairs. On the wall there’s a chalkboard with numbers and squiggly marks in rows, some crossed out or smudged illegibly and others circled and underlined. People in wrinkled aprons are walking to and fro, carrying paint brushes and ink pads and inkwells. I think I recognize one of them as the dame from who makes snow angels in the commercial. On second glance I’m pretty sure it’s not her.

“Welcome to the ticket factory,” said the groundhog. “It’s where we make the tickets.”

“So why’d you bring me here?” I ask. I look at Meme, hoping she’ll tell me the whole thing’s a joke. She takes a puff and looks around.

The groundhog smiled. “You can be quality control,” he replied. “It’ll be your job to check and make sure the numbers are right.”

“I thought they were random,” I said, then wondered why this was the part that strained my credulity. “You just scratch and they’re there.”

The groundhog scoffed. He pulled out a chair and made a flourish with his paw to show I could have a seat. My legs were getting tired and I felt sluggish, especially after the bourbon. The groundhog pointed at the ticket in front of me.

He handed me a dime and told me to play the ticket, so I did. 26066206, it said. While I’d been scratching he’d walked to a closet and came back with a burlap sack in tow behind him. I showed him the number I’d found. And he pointed to the chalkboard. Second row in the middle. 26066206. “Good,” said the groundhog.

“This doesn’t make any sense,” I said.

“You’re free to go if you want. Nobody’s making you scratch.”

I thought about it for a second as I looked down at the pile of tickets: Why not. “I guess it can’t hurt to try,” I said finally, picking up another ticket. “Once you get the basics down, you can work on your technique. My best worker used to do each ticket with a flick of the wrist, no schmutz on his hand!”

There was some schmutz on the underside of my hand. The card I’d just scratched had dollar signs all over it. REAL HIGH ROLLERS, across the top. I looked up at the chalkboard. “What do I do now?” I asked.

The groundhog tried to wink again, then overturned the sack over the table. A heap of tickets fell out. Some drifted onto the floor around my chair.

“Keep on scratchin’!” he said brightly.