The protesters wore silver wigs and white button-down shirts; their shirts stained with the blood of bankers. 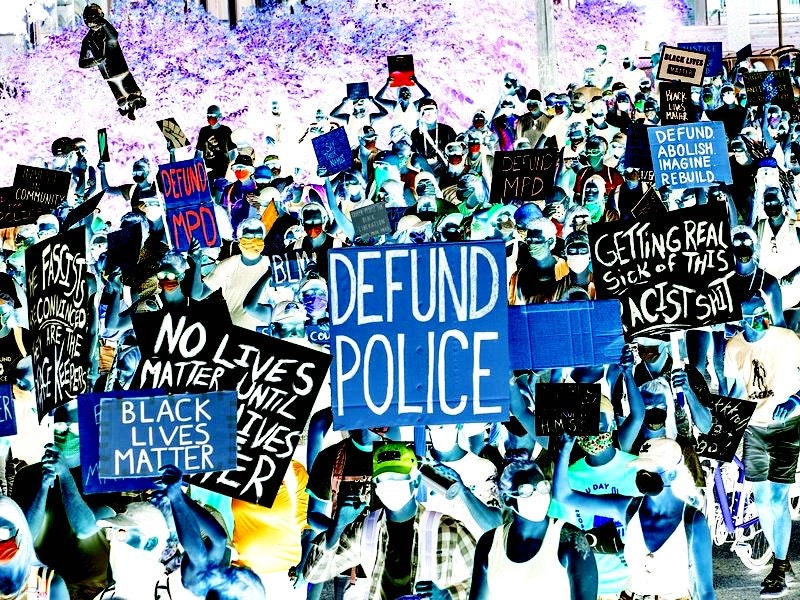 It was a Sgt. Pepper album cover of the wanted, in a White Album summer of wantonness. It was the happiest night of our sick lives, when, after the disc of polyvinyl ricocheted and ripped itself apart; after the largest remnant crashed into a field of grass; after the interval between tracks; after the center fielder ran from the warning track, we called each other from the comparative safety of our homes. We called with news, for someone had shot Andy Warhol at Yankee Stadium; and Huey Newton at the Oakland Coliseum; and Bucky Dent at Fenway Park. Someone had also seated D.B. Cooper next to Joseph Kony, next to Rafael Cruz, next to Ted Cruz. Someone had started the wave among a collection of cutouts.

The wave flooded the streets with protesters, from the Bronx to the Bay Area to the Back Bay of Boston.

The protesters did, however, let satellite trucks go where no ambulance could enter and no patrol car could leave. The trucks bore the logos and letters of their respective regions, like a caravan of oracles and ornithologists; like a collection of floating eyes and flirting peacocks; like a convention of on-air talent from CBS and NBC, because no one watched ABC.

The last truck to arrive got the first set of interviews.

Such was the power of a symbol that curved without collapsing, that rose and fell without breaking. Such was the symbolism of a microphone of a flagpole. Such was the flag borne by reporters from CNN.

In the halftone of a crescent of moonlight came an apparition in the twilight of life. He dragged his fists like cracked and misshapen wheels of stone; he pulled himself forward by grinding his bones. He was a blur in a flash of gold. He faded into the background, eclipsed by the silhouette of a bloated and bemedaled caricature of a street preacher.

“They assassinated Huey,” the preacher said. “But they didn’t kill his soul. See, they don’t understand Newton’s laws. For every action, there is an equal and opposite reaction. And we will react.”

I reacted first by reaching for my phone. The device vibrated to the sound of a customized ringtone. The song was “San Francisco Days”; the caller, my sole contact in 415. The call went to voicemail, followed by a text telling me to “Turn on CNN. RIGHT NOW.”

In Delray Beach, Florida, home of “Little Fenway,” where a Black Lives Matter banner draped the 35-foot “Green Monster,” Bucky Dent took the field. He wore his old uniform of white with navy blue pinstripes. He wore a navy blue cap, too, with a white interlocking “NY” logo embroidered above the bill. He looked like a revived but aged John Henry Williams, the former entombed but not embalmed “neighbor” of his father, Ted. He looked like the keynote speaker at the National Funeral Directors & Morticians Association Annual Convention. He looked like he was still dead.

In this simulacrum of Red Sox Nation, which was like a 3D model of unchecked climate change, Dent read a prepared statement. “I just spoke with the mayor of Boston, the governor of Massachusetts, and John W. Henry, principal owner of the Red Sox. Mr. Steinbrenner was also on the call. To the people of New York and Yankees fans everywhere, let me assure you, I’m okay.

“I think back to 1981, the year we had a players’ strike. We overcame our differences. We won our division and the pennant, but lost the World Series to the Dodgers in six. President Reagan said it best, because he had been shot earlier that year.