The Man with the Gold Car

A very special guest enlivens the day of some elementary school students. 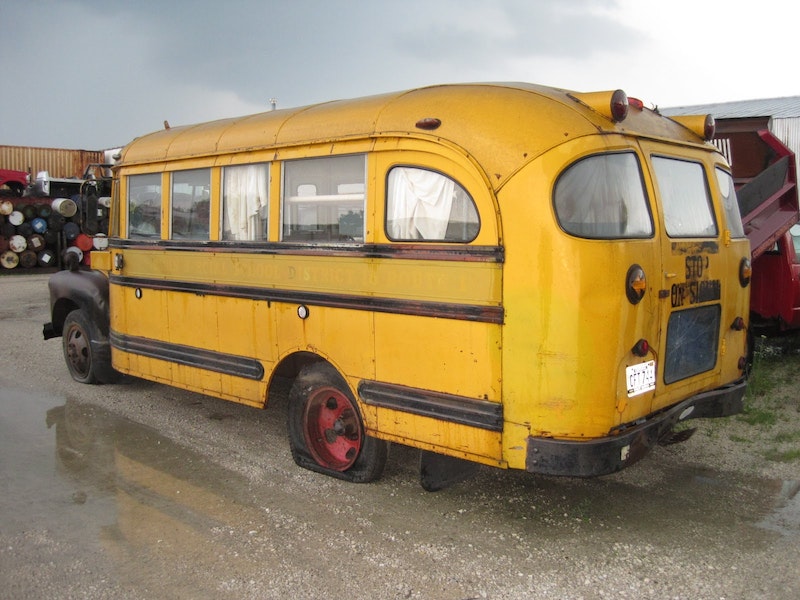 “Okay, everyone,” Mrs. Twiggs said in her kindly teacher’s voice. Appropriate, since she was a kindly teacher, don’t you think? She was wearing a sweater bedecked with pictures of apples with worms in them, chalkboards on which arithmetic problems had been written, and other education-related foofaraw. “Our guest speaker today is a real hero. I’m sure your parents have told you all about all the wonderful things he’s done for this town and its people, so I think we all owe him—the man with the gold car—a nice warm welcome.”

The second- and third-graders applauded as loudly as their tiny little hands would allow them to applaud. Mrs. Twiggs clapped, too. She was a big believer in “leadership by example” or something. Who really knows? I wasn’t very well acquainted with her while I was among the living, to tell you the truth.

The man with the gold car smiled. “Thank you,” he said with the same winning smile that had won him the hearts of everyone here in Anytown, USA. “Thank you all very much.”

The man with the gold car smiled once more and nodded. “Yes, I suppose you’re right. The honor is all mine,” he said. He crossed his legs and looked out at the classroom full of children who, it should be noted, seemed awed by everything about the man, most especially the masculine radiance that emanated from his very being.

“Pillowface, you wanted to give the man with the gold car something, didn’t you?” Mrs. Twiggs asked.

Pillowface Jones, looking as bashful as her pillowcase-for-a-face would admit, shuffled awkwardly toward the front of the room. She handed the man with the gold car a sheet of paper, her hand quivering as she did. He took it, looked at it and smiled. “Are you an artist?” he asked in the vaguely disturbing way that a grown man asks a child—especially a little girl—such a question. “Hmm?”

Pillowface didn’t respond, really. I mean, she giggled nervously, but that’s not much of a reply, now is it?

“She’s shy. It has to do with her condition,” Mrs. Twiggs pointed out helpfully.

Mrs. Twiggs looked at Oscar Berkman. “Oscar, you have something for the man with the gold car too, don’t you?”

“He wrote a poem,” Mrs. Twiggs said with a smile, “He loves to write poetry.”

“Mmm,” the man with the gold car intoned pleasantly.

Oscar stood up at his desk, his hands also quivering as he held a sheet of college-ruled notebook paper not far from his face. Nervously, he read aloud, “C-C… Camden found her knowledge lacking/S-So of course she was… s-s-surprised when it attacked/Her, a beautiful gold car/Impacted and cracked her/Now she’s dead, her back… backbone fractured.”

“Did you hear that, Oscar? He liked it. He really liked it!” Mrs. Twiggs exclaimed as only a frumpy, middle-aged elementary school teacher could.

Oscar was happier than a man with a “near-miss” scratch-off lottery ticket that could be redeemed at any convenience store for 200 more lottery tickets.

The man with the gold car reached into his jacket, produced a Luger and trained it on Oscar’s head. He pulled the trigger, blowing Oscar’s tiny little brain out of his tiny little head and plastering it all over the wall. Everyone was impressed. Pillowface Jones, watching with rapt attention, kept clapping long after her classmates had stopped.

“Oh, this has been a treat,” Mrs. Twiggs said as Oscar’s blood soaked the white tile floor of the classroom. “Hasn’t it, everyone? What a treat, yes indeed. Hasn’t it been a real treat?”

All the children nodded and smiled. The man with the gold car smiled, stood up, smoothed the wrinkles from his pants, and walked over to Mrs. Twiggs’ desk. “I’ve enjoyed myself, Mrs. Twiggs. You’re a wonderful teacher and you have some terrific kids here. What a bunch of cuties,” he said.

The man with the gold car smiled. He knew it meant a lot, of course. He was well aware of how much weight a compliment from his lips carried. He grabbed Mrs. Twiggs by her short brown hair, tilted her head back, and sliced open her throat with a large butcher’s knife that some kind soul had placed in his hand. Her blood gushed all over his nice new suit. He smiled and so did she. That’s right—she died with a smile on her face.