A short story about a panda, a point guard, and the pointlessness of life. 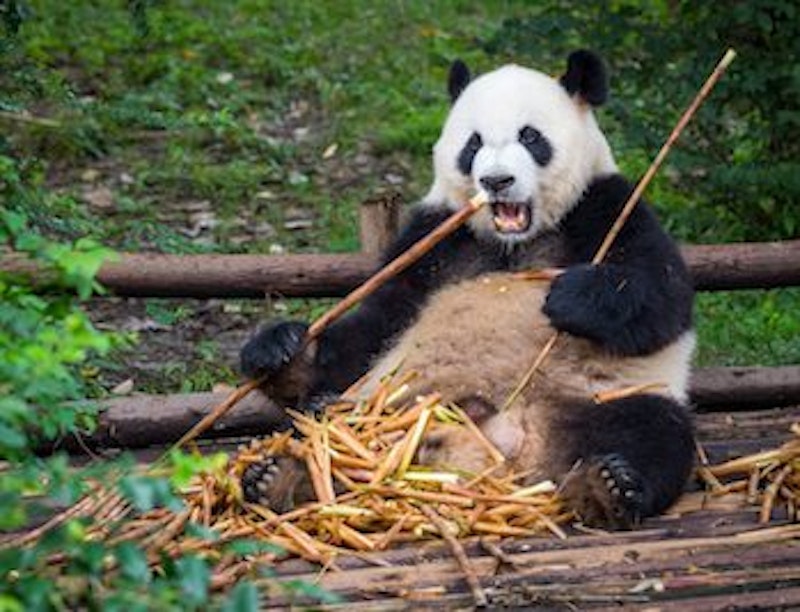 “Well, Ming Ming, did everything work out the way you wanted?” I asked the panda, who just kept on doing what pandas everywhere do: eating pounds of bamboo and occasionally dozing off. “In the end, I mean,” I persisted, hoping against hope for an answer. “Was it good for you here? Was it bad for you?”

But that lazy son of a gun wouldn’t stop gnawing on his bamboo stalk long enough to answer my question. He wasn’t going to give me the time of day. His schedule, which consisted of moving as little as possible to conserve the nutrient-poor calories provided by the bamboo, was exceptionally tight and would admit no distractions.

Ming Ming, so the story goes, came to our city’s zoo from a private reserve. He and a dozen other pandas were part of a top-secret breeding project undertaken by some Dr. Moreau manqué. The doctor was attempting to splice panda DNA with gorilla DNA because, as he screamed to the INTERPOL agents who arrested him, “the time had come.”

Ming Ming was the sole survivor of this utopian panda-gorilla fusion farm, and he seemed none the worse for wear. He had a bunch of nasty scars all over him and nightmare-inducing PTSD, but is that any worse than what you or I go through on a daily basis? I think not, mon frère. I was in a fender bender about six years ago on I-95 while driving through Richmond during rush hour and, man, my neck still hurts. Whiplash, they tell me. Wish I’d gone to the doctor and had it checked out, but I was so darn busy with everything I was and wasn’t doing. I was busier than this good-for-nothing abused panda, anyway. Yet here he’s front-page news and I’m yesterday’s papers.

It wasn’t always like this. You may not remember me, but I was the backup point guard for the 1994-1995 Virginia Commonwealth Rams. We went 19-11 (8-8 in the Colonial Athletic Association), qualified for the NIT, and lost in the first round to the University of Rhode Island Rams (real creative, huh?). I say backup, but it wasn’t like I was a benchwarmer who sat around all game in a sweat-free, non-bloodstained shooting jacket. No, I was more like an eighth man who averaged 10 minutes, one point, and two assists per game. I wasn’t exactly Isaiah “J.R.” Rider—I’m 5'11" and I’ve never dunked a basketball, for one thing—but my contributions were more than de minimis and I think I was in a good position to make even greater contributions as a seventh man during my senior season.

Then there was that accident, the one I oh-so-casually referenced earlier when I was talking about Ming Ming’s PTSD. I can be calm and collected about it now, but the whiplash it caused would forever alter the trajectory not just of my three-point shot (23 percent from “downtown” before the injury, zero percent afterwards) but of my entire life (2.5 GPA with a communications major before, college dropout one year later). Before you could say “Isaiah ‘J.R.’ Rider,” I found myself living in an abandoned school bus parked somewhere along the Henrico County line, miles from the opulent studio apartment I once occupied in downtown Richmond.

But I guess I can’t blame it all on the accident, no more than Ming Ming can blame his inability to impregnate Song Song on his former owner’s decision to circumcise him. The way the papers reported it, the guy was a devotee of the Jewish philosopher Maimonides and believed that circumcising the panda would cause him to finish faster, derive less joy from the sex act, and focus exclusively on procreation instead of the pleasure that accompanies busting a nut. So what I’m saying, then, is that Ming Ming’s owner had his reasons and I had mine.

Reasons for what, you ask? That’s so kind of you to ask. Nobody just asks nowadays; instead, they launch right into the interrogation under the klieg lights and you’re too nervous to ask to stop so that you can call your attorney. The reasons I’m talking about are my reasons for getting entrapped in one of those internet “honey pot” wife-purchasing scams. All of my reasons begin with true love and end there, too. Can you chat with somebody, even a fake somebody or a team of Russian gangsters, for five hours in an AOL chatroom and not feel something swell in your heart of hearts? Something besides a desire to drink a couple 40s and “push rope” for as long as your injury-weakened constitution allows, I mean. Because I did feel that, but I also felt something greater, something deeper.

Was this the same something that Ming Ming feels when he gazes up into the gloomy gray heavens, bamboo stalking dangling from his mouth the way a circa-1989 Ring Pop used to dangle from mine? The challenge in talking about the past—my past, Ming Ming’s past, your past—is that the words are always coming from the present. The crazy things that happen to us, and there are so many of those, can’t be quantified or qualified like my performance on the 1994-1995 VCU Rams basketball team.

But let’s pretend for a minute that Ming Ming’s life didn’t go south after he was captured and smuggled into an evil scientist’s lair. Let’s suppose that it started much earlier, that Ming’s Ming father, a panda like himself and most assuredly not a gorilla (because as we now know, that’s not possible given our current level of DNA-splicing technology), just didn’t love him enough and that was what did him in. We’d be wrong, wouldn’t we, for making asses of ourselves and assuming that life was so bad with those other gorillas and pandas, that the torture was indeed torture. Maybe Ming Ming developed Stockholm syndrome; maybe he met the love of his life, and that love was a gorilla.

Ming Ming and his hypothetical gorilla princess together in the gloaming of a fall day: is that so hard to believe? Is it so hard to believe that the one that we love, the one who completes us, isn’t someone we could ever have? It’s certainly hard to talk about. I can’t reckon with the words, and Ming Ming, for his part, will remain forever silent but for the ceaseless crunching of his bamboo.