The Magic of Mudlarking

Playing in the mud isn’t just for kids. 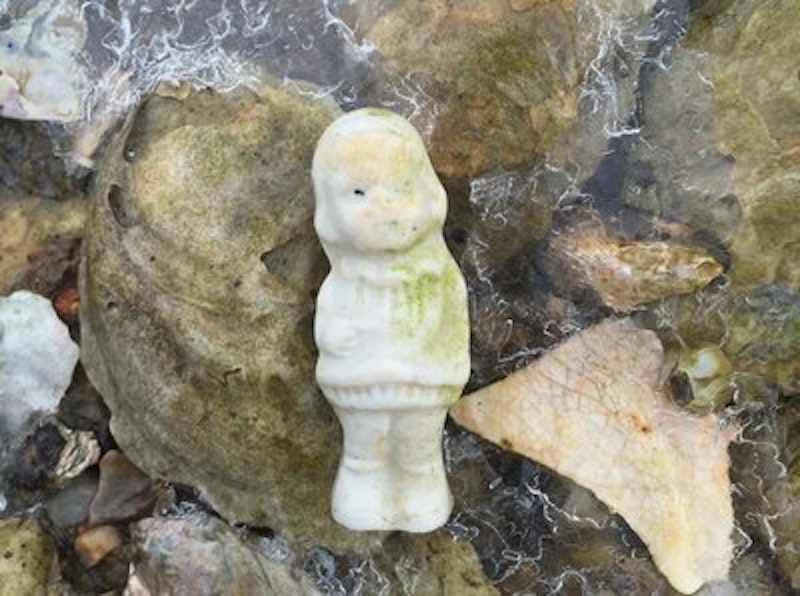 No word has changed as much in meaning over a 100-year period as “mudlarking.” Used in the late 18th and 19th centuries to describe impoverished youngsters who would wade into the sewage- and corpse-filled mud of the River Thames in London to retrieve coins, coal, metal or anything else that could be sold, mudlarking is now an exciting and often lucrative, competitive treasure hunt undertaken by adventure-seekers who love history.

As a beachcomber myself, since I’m near the bay and not an ocean, some of what I do is considered mudlarking. Though I search for sea glass, pottery and other treasures on sandy beaches, some of the tributaries of the Chesapeake Bay are rivers, and their shores are muddy. The mud is a sucking, black consistency and more than once I’ve been caught in it up to my knees. Once, while pulling myself out of a muddy shoreline I was asked by a boat full of watermen, “What happened to your boat?” and by now I’ve learned what parts of the river to avoid. The photo above depicts a one-inch porcelain doll I found on a muddy, icy shoreline just the other day, my last day beachcombing, or mudlarking (my boots were covered in mud; the water was the consistency of a giant mud Slurpee). This doll, especially after what happened when I lost a tray of my greatest beachcombing finds last year, now represents my favorite find in 15 years of hunting, so I was very glad to have made it out to the semi-frozen shoreline for one more hunt before the blizzard came and dumped nearly two feet of snow on Maryland’s Eastern Shore the very next day.

But mudlarking’s real home is London. I learned about it on Instagram, where I follow Ted Sandling, better known there as @London Mudlark, whose book about London’s history told through mudlarking will be published this fall. His simple, high-quality photos of finds from the shores of the River Thames are captivating. I’m always eager to see what he posts next—from the history of a piece of pottery to an ancient coin, or a pearl he found and had made into a necklace for his wife.

“I love the ability to connect directly with London’s history,” Sandling says. “Anyone, when the tide is out, can go down to the Thames foreshore and pick up something that no one else has held for three hundred years. It gives you a feeling of being on a continuum with London’s past in a way that you don’t get from a museum.”

Social media posts like Sandling’s give couch beachcombers and mudlarkers a way to discover historical finds from home. Public awareness about the joy of mudlarking grew in popularity when the History Channel ran a series for three seasons called Mud Men. There are mudlarking Facebook groups, blogs, documentaries, and artists who make things using finds from the shores of the Thames. Artifacts are collected for inclusion in museums, or sale at auction. The “dumpster diver” mentality has long been replaced with a “treasure quest” seal of approval. The Port of London Authority has issued official guidelines for metal detecting and digging on the Thames in order to keep less experienced treasure-seekers safe from the cold water and quickly-rising tides.

For now, I’ll stick to kayaking the muddy shores of the rivers near the Chesapeake Bay, but one day I’d love to take my insulated, waterproof boots, and mudlark the real river in search of something older than I could ever find here.