How hard could it be to plant a bomb at the Super Bowl? 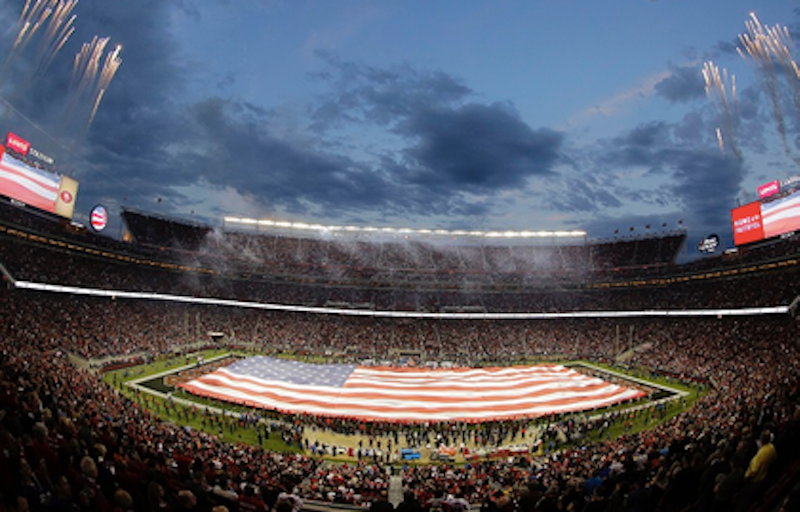 It gives me no joy to report that California has fallen. I loved San Francisco madly during the time I lived there: exactly one year, Labor Day to Labor Day, 1976-77, and the Yuppie Era, 1983-88. My more recent tenure in Silicon Valley was not so pleasant. Silicon Valley is in every way an abomination. There’s an arrogant hypertrophied sense of reason running loose out there. Those people should listen to more old Firesign Theatre records and dump the Ayn Rand books into the fireplace where they belong. They think they’re in control. They think they’re smart. They think it’s all about “Will.” They don’t believe in luck. I’m pretty willful, and I’m smart enough and old enough to know that luck is a very big factor.

I’ve never liked American football, and I’ve loathed the NFL since I found out about their whole nonprofit scam. Their call for 500 able-bodied volunteers to assist in moving the halftime stage onto the field is a profoundly stupid security hole. These personnel should be fully vetted IATSE members. There is no excuse for the use of non-vetted non-union labor in any capacity at all in a spectacle as security sensitive as the Super Bowl.

Most of the visitors are going to be staying in San Francisco. The Levi’s Stadium is some 40 miles down the Peninsula. San Francisco is anticipating total gridlock. Route 101 is pretty congested much of the time. Route 280 is definitely not for amateurs or tourists. Neither route is particularly drunk-friendly. As I write this, sfist.com is reporting 500 traffic collisions in the SF Bay Area in a 12-hour period on an ordinary day. A couple of dozen Black Lives Matter activists from Oakland shut down the westbound lanes of the Oakland-Bay Bridge during the morning rush hour earlier this week. Imagine the attention they could draw disrupting Super Bowl traffic.

Security forces can lock down the trains, but the tracks are wide open. It seemed as if once a week some inconsiderate person consumed by despair brought a halt to their agony and commuter rail service by stepping in front of a train somewhere on the Peninsula when I was living there. How hard could it be to plant a bomb?

Speaking of bombs, the threat is obvious: a nuke in a truck hurtling north past the stadium on 101. Every year on Super Bowl Sunday, Daisy and I watch The Sum Of All Fears and Black Sunday. It may be that California hubris will compel us to cut short our annual viewing. I have a lot of good friends out there. I look forward to their continued survival, and their thrilling Facebook posts from the ringside seats. I’ve always wished I could teleport in and out of disasters. There’s a very plausible argument for time travel tourism in that concept, what with no witnesses. I’ve always felt like a tourist, except in New York, in the 1960s.