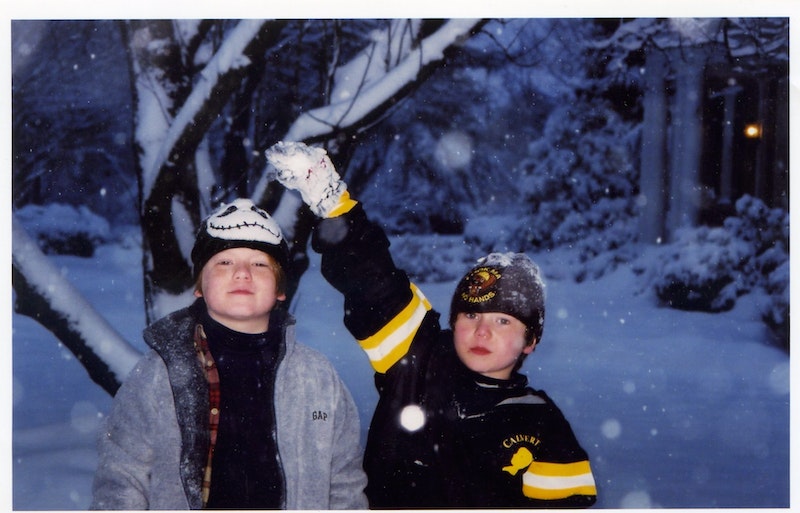 When my wife Melissa moved to New York from Southern California in 1987—living in a pre-gentrified Brooklyn shoebox for $350/mo.—she was understandably dazzled when it snowed. No surprise: there were no blizzards in Los Angeles or Santa Cruz to cover the palm trees, no days off from school, no snow angels. Her delight continued for several years, but was quickly extinguished when a monstrous snowstorm hit NYC in January of 1996. As it happened, we were in Florida, the first time away from our two young boys—a friend of Melissa’s had volunteered to babysit as a Christmas gift—and, not only was it unseasonably cold in Orlando, but our weekend getaway turned into a real stinker when the flight home was cancelled. Finally, after making a bunch of reservations at the airport, dodging all the fellow travelers also trying to escape, we got on a plane that took us to Columbus, OH, and then to Detroit to change planes, and finally one back to Newark. It was really dodgy, and Melissa swore she’d never leave the boys alone again. Meanwhile, young Nicky and Booker had a ball, playing on Hudson St. with Lisa (who certainly got more than she bargained for, but was a good sport), with not a care in the world, save throwing snow at each other.

By that time, as a lifelong Northeasterner, I was jaundiced about any storm that left more than two inches. When blizzards hit—either in Baltimore or New York—I daydreamed that the two coasts could somehow switch climates. As a kid growing up on Long Island, of course, snow was the ultimate perk of winter: my brothers and I would listen to WGSM-AM radio, hoping after a snowfall, that our public school district was announced as closed. And then we’d go sledding, slip down hills on Flying Saucers (a popular toy at the time), build forts and have vicious snowball fights with school chums. When I was around 10, I began to rake in the cash shoveling the driveways for elderly neighbors (after I finished our own driveway, of course); it was perfect, shoveling in the winter and mowing lawns starting in May. Kept me in the scratch for purchases at Oscar’s bookstore in downtown Huntington. And as a college student, the snow was a boon as well: even though Johns Hopkins was really stingy with cancelling classes, we’d blow them off anyway, and take to the hills of nearby country clubs to drink and pack as many people as possible on a toboggan.

Nicky and Booker, now 23 and 21, respectively, have lost their childlike glee for snow. They loved all the breathless news reports leading up to a blizzard, and like me, lived for school closures, messing around in the elements (as the above 2003 picture near our home in Guilford shows) and making snowballs to throw at yours truly. They were less than enthused about shoveling. Now, it just messes up their plans: driving is hazardous, it’s a cold walk to the Charles Theater (if it’s open), and forget about seeing music at night. As I write, on Thursday afternoon, my wife just called to say that two of her appointments were called off, and she was in a madhouse supermarket—no eggs left!—even though the dusting from Wednesday night had disappeared. Mid-Atlantic residents go bananas when a mere few flakes fall: the panic is overwrought, bordering on Super Bowl mania. Yes, it’s going to snow, hard, and you just hope the power doesn’t go off. It sucks, but that’s life on the East Coast.

I’m not a complete crank on the subject of snow. Who doesn’t still thrill, no matter your age, at a fresh and windy snow falling at night, creating an ephemeral Norman Rockwell portrait? But it’s best on a Sunday, in March, when in all likelihood the fluctuating temperatures of that month will melt it all away within a day. January and February snows are brutal: once the storm’s over and the streets are passable, you’re still left with yellowed-drifts and chunks of ice that hang around in what’s Baltimore’s most ugly time of year. It’s a landscaper’s bonanza, though. A couple of years ago, when back-to-back huge storms hit, the trees and bushes in our yard were demolished, and it cost a fortune in the spring to make the property presentable.

Meanwhile, I’m hoping—begging—for a reprieve, lots of cold rain instead of a blizzard. At this point, I don’t like the odds:  the hapless Martin O’Malley has a better chance of stealing the Democratic presidential nomination than us dodging this unwelcome interruption.