Commerce Street: One “L” of an Alley 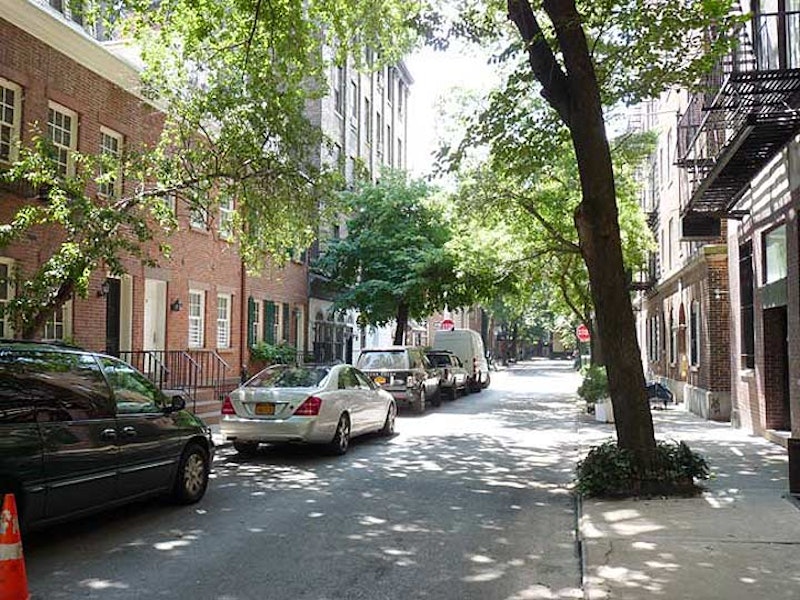 As far as I can tell, there are four “L”-shaped streets in Manhattan: Shinbone Alley, a now-privatized lane in NoHo between Lafayette and Bleecker Streets. Another one is Marketfield Street in the Financial District between Broad and Beaver Streets that has been there since the 1600s with a variety of names, but the street itself is a back alley mostly populated by Dumpsters. Then there’s Ryder’s Alley between Gold and Fulton Street, but that one was demoted in the 1990s when part of it was given back its old name, Edens Alley. It, too, is mostly noticed only by the rats and pigeons.

Commerce Street, between 7th Avenue South and Barrow Street, is a different beast. It’s lined by handsome townhouses, some quite old indeed, and is punctuated by the historic Isaacs-Hendricks House and the Cherry Lane Theater. It’s clearly a cut above those other L-shaped alleys in every way.

Both books that list the origins of NYC’s street names, Henry Moscow’s The Street Book and Sanna Feirstein’s Naming New York, both usually reliable guides, have the story that Commerce Street got its name because an early 19th Century smallpox breakout forced downtown businesses to move to the Village, though Don Rogerson, author of Manhattan Street Names Past and Present, says Commerce Street was mapped by 1799. Jim Naureckas, of NYC Songlines, asserts that Commerce Street, in conjunction with Reason Street (now Barrow), Science (now Waverly Place) and Art (mostly obliterated but part of Astor Place), was named in honor of “French Revolutionary values.” In any case, Commerce Street’s origin is murky, and as it turns out, its sub-name, Cherry Lane, is the result of a mishearing, as we’ll see. 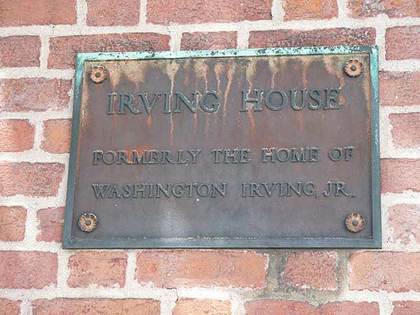 Commerce Street today ls lined with pleasant Federal-style brick townhouses, which demand many millions on the real estate market when available. But this is Greenwich Village, and there are quirks.

A plaque on #11 Commerce proclaims it as the former home of Washington Irving, Jr. The sign is perplexing, to me at least, because the famed author of Rip Van Winkle and The Legend of Sleepy Hollow remained a bachelor after the death of his fiancée when she was seventeen years old. Perhaps the plaque refers to someone claiming to be his son. (Washington Irving’s father’s name was William Irving, Sr.)

Again in Songlines, it is posited that #11 was the home of Irving’s sister, and he wrote Sleepy Hollow here. However, it was first published in 1820. 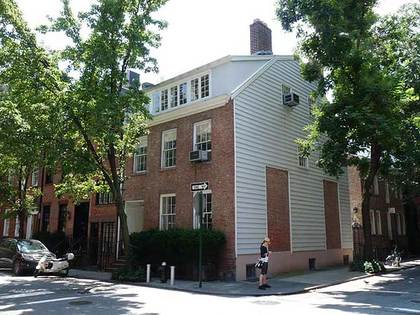 The Isaacs-Hendricks House, #77 Bedford Street at the southeast corner of Commerce, is one of a handful of remaining buildings in Manhattan built in the 18th Century. It just got under the wire since it was built in 1799.

Large sections of it, including the brick facing, were added in 1836, and the third floor is practically “new,” since it was added in 1928. It is a former farmhouse owned by Harmon Hendricks, a copper merchant who supplied Robert Fulton with materials for copper boilers that powered the historic Clermont steamboat run in 1807. Next door, in a house so narrow it seems to rate only half an address, is 75-1/2 Bedford Street, a house only 9-1/2 feet wide. There used to be stables inside the block adjacent to the Isaacs-Hendricks House, and the narrow building was constructed in 1873 on what used to be the carriageway entrance. Famed poet Edna St. Vincent Millay lived in the building briefly in 1923-24. Beat novelist/journalist William Burroughs lived at 69 Bedford, a few doors down, in the 1950s. 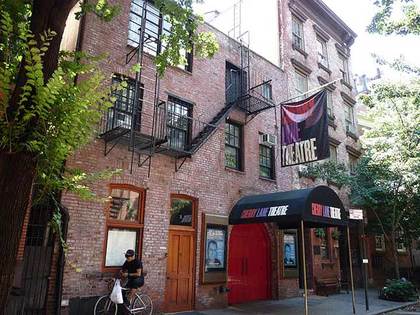 Both #36 and #38 Commerce Street were built for brewer Alexander McLachlan in 1841, and the two houses share a courtyard. The Cherry Lane Theatre has been located at #38 Commerce since 1924. Between its time as McLachlan’s brewery and the theatre, the building had been used as a box factory. Edna St. Vincent Millay was among the theater's founders.

According to the theater’s website it has played host to the cream of American playwrights’ productions and some of the most popular actors on the NY stages and Hollywood.

For years many historians assumed that Commerce Street was called Cherry Lane at one time, and in the 1990s the Department of Transportation gave it a sub-sign on 7th Avenue South. However, the appellation is fictitious and was made up by one William Rainey, one of the investors in the Cherry Lane Theatre.

Originally the group had a hard time coming up with a name for the venue, and when a reporter asked him what the theatre would be called, Rainey scrambled to find an answer. Recalling that the group had joked about calling it the “Cheery Lane” theatre since a London critic had been lambasting the Drury Lane Theater as the “Dreary Lane,” Rainey blurted out “Cherry Lane.” He perpetuated the ruse his entire life, claiming to have found an old map with Cherry Lane on it. He confessed to the jibe shortly before his death in 1964. 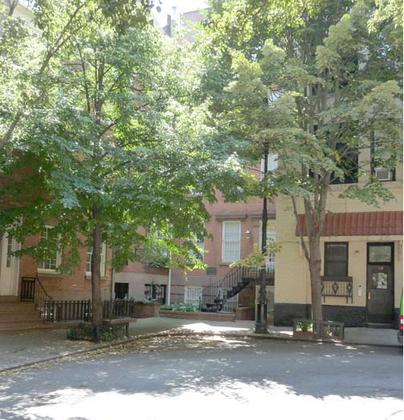 Commerce Street’s hallmark is its nearly 90-degree turn. If you look at a map, you will see several Greenwich Village streets that have a bend along the same line as Commerce Street’s more extreme bend: Grove, Barrow, Morton, St. Luke’s Place/Leroy Street and Clarkson/Carmine Street east of Hudson Street all have picturesque bends. The bends mark a 1633 property line delineating the holdings of Wouter Van Twiller, the successor to Peter Minuit as Director General of the New Netherland colony. His home stood where West 8th and Macdougal Streets intersect today.

Commerce Street originally dead-ended but was given an extension, turning it north to Barrow Street, fairly early in its existence.

#46 and #48 Commerce Street meet perpendicularly at a near 90-degree angle, an unusual situation in New York City. Both buildings were constructed in 1844 for department store magnate, Irish immigrant Alexander T. Stewart. His huge emporium, the first of its kind in NYC, eventually faced all of Broadway between Chambers and Reade Streets. The building was later the headquarters for the old New York Sun newspaper.

Stewart founded Garden City in Nassau County, and built his own railroad line connecting Queens and Garden City in 1872. The railroad faltered after two years, but much of its right-of-way is now Kissena Corridor Park.

In a bizarre occurrence, three weeks after his 1876 burial in St. Mark’s Churchyard in the East Village, his remains were dug up and held for a ransom, which was paid, but it’s still unclear if the remains that were returned were Stewart’s.