No photo tells the whole story. 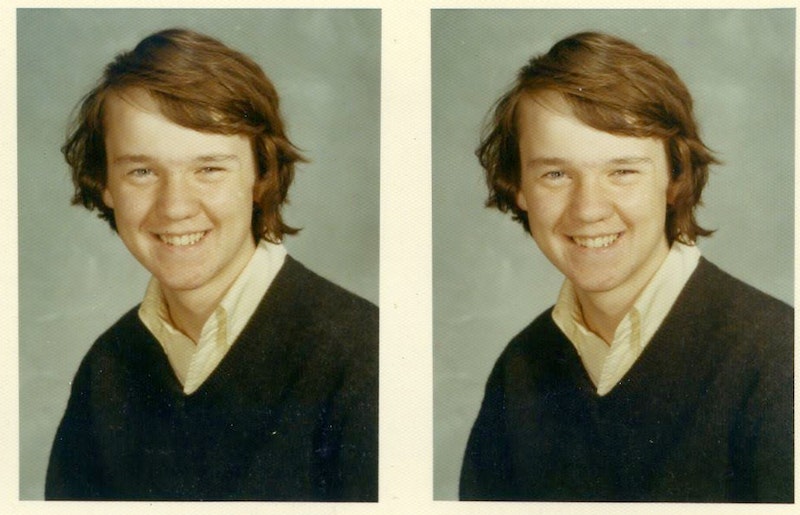 It was photo-time at Huntington High School’s gymnasium in the spring of 1972, and I stood on an endless line of impatient students waiting to get snapped for that year’s posterity. There was no bonus in this exercise: shoots were scheduled during free periods (or study halls), so you didn’t even get to miss a class. I’ve no recollection who I gabbed with while inching towards the impossibly large set-up from the company that made a mint traveling school to school, selling various sizes of photos of Prince or Princess to eager parents. But it was boring.

Finally, my turn, and as I exited the booth, the two fellows in charge laughed together, one saying about yours truly, “Now, that’s a face only a mother could love.” A cliché they probably repeated 50 times a day, but I heard it and was pissed. Didn’t have the presence of mind—this was a hurry-up sort of affair—to turn on the lunkheads, one of whom had a double-gut hanging over the belt of his cheapo Robert Hall slacks, and say, “Hey, fuck you, buddy!” Granted, as you can see from the photo above, I was not in jeopardy of getting called by a talent agency for two-bit TV commercials, but was rather an ordinary Anglo male of reasonable looks, like most of my classmates. There really aren’t too many unfortunate youths who can be actually called ugly in an objective sense.

Maybe it was my facial tic that tripped the workaday photographers, frustrated by my blinks, nose twitches, wiggling of ears, eyes circling round and round, occasioning one of them to tell me to just sit still, please! Or it could’ve been a flare-up of acne that ran in the family—loads of families with fair skin, actually—an affliction that was disheartening, and hardly ameliorated by daily touch-ups with Clearasil or Tackle, two of that era’s snake-oil ointments that brought in reliable streams of revenue for the parent companies, and would until the introduction of antibiotics in ’74 or so that rendered the tubes of cream obsolete. In any event, all these school photos were airbrushed—to increase sales, of course—and a good thing in my case, for it was likely on that day a big, fat and angry pimple sat atop my potato nose.

I wasn’t particularly vain about my appearance—and certainly not today, for as one of my brothers said while we were both in our 30s, “The Irish do not age well”—but that guy’s tossed off insult took me aback for a day or so. Wasn’t it just yesterday, I thought, when I was buying apples at the Southdown Shopping Center’s IGA that the produce manager said something that cracked me up, and he kindly responded, “With that beautiful smile, you’ll be a hit with the ladies!” I was 10, mind you, but still liked the sound of that.

My acne persisted for a few years, until a Johns Hopkins nurse in my freshman year suggested the above-mentioned antibiotics, and that did the trick. But on occasion I recalled those days of not eating chocolate—supposedly a zit magnet, now debunked—and cringed. One time, in the early 80s, a colleague of mine at Baltimore’s City Paper, a paste-up artist, didn’t care for one of the typesetters and often called her a “pizza-faced skag.” It would’ve been hypocritical for me to laugh along, so I didn’t, and moved the conversation along. These days, of course, a remark like that could result in the perp called out for bullying, and maybe a protest insisting on his dismissal. What a racket for those in the legal trade.