The Life and Times of “Herc” Broadsides 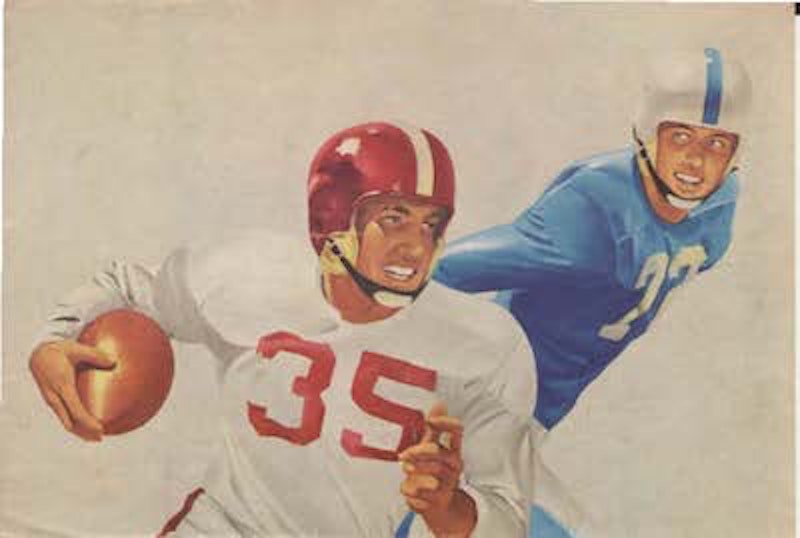 When Splice Today asked me to contribute a piece in commemoration of my heroic life, I told those pansies that they could pound salt. Then I added that I doubted they’d pound much salt, what with their being limp-fisted milksops and all. After they begged, pleaded and cajoled, I finally relented and said that I’d do something for them… as long as they could convince “Studs” Macho, America’s he-manliest prose poet, to type it up for me. Sure enough, old “Studs” had been out of work owing to a 10-month crack cocaine bender and a gig like this was just the kind of slumpbuster he needed. So we here are, about to tell the whole wide world the unvarnished truth about its foremost living legend.

For those of you who’ve read this far expecting a feel-good piece about purring kittens and changes of heart, I’d advise you to skip to the next article. That pabulum might make a fine breakfast cereal for infants, but “Herc” can write it only one way, and that’s the hard way. See, my life has been a vale of tears, enlivened here and there with an occasional touchdown scamper or inside-the-park home run.

I was born right next to a mailbox in a town so small that it didn’t have a name. My mother was 55 years old and my father had been dead for five years. They had 17 kids together, and his seed was so potent that four of them had been posthumous. During his life, he worked as a coal-hauling man. Each hour of his shift, he hauled 500 pounds of coal up to the mine portal and dropped it into a rail car. This was long after the invention of machines that could do that, but my father had his pride and refused to concede that any gaggle of gears could haul coal better than him. He was so proud that he never joined a union or took a paycheck. He worked 22 hours a day and slept in a hole he’d dug into the side of the mine. He lived off insects that happened to fly into his mouth and drank nothing but his own urine. He was a tough hombre, my father.  They don’t make them like that anymore, and I think that’s why we can’t close this bomber gap with the Soviets.

I inherited my father’s gumption and decided to leave home when I was four. I kissed my mother goodbye, then trounced my 30-year-old hulk of a brother in a bare-knuckles boxing match that lasted for five days and 137 rounds. Following that epic contest, I tramped up and down the railways and highways of this capacious land. I worked every job from teamster to fishmonger, and there wasn’t a one of them where I didn’t wind up the top man. That’s how I’ve always been, you see. Life’s a big competition, a survival of the fittest, and “Herc” here has always won out.

I was playing on the Gondini Macaroni company baseball team when a scout for the Cleveland Spartans caught me in action. I was 14, but already as tall as a redwood and as stout as an oak. I hit a homer every time I came to the plate in that game, and we beat the opposing team by 50 runs.

“Gosh, that sure was a peach of a performance,” said the scout, a fellow named “Glory” Gus Genko who’d been a real big name back in the Roaring Twenties or maybe the Swinging Sixties. Either way, he looked to be older than dirt and about as lively as Lazarus on the third day.

“You ain’t seen nothing yet, granddad,” I told him. And he hadn’t, because after the Spartans signed me I proceeded to win five MVP awards and lead them to five pennants. After my sixth season in the league, at the end of which I refused the MVP award because I felt someone else needed a turn, I had come to believe I’d done all I could with baseball’s oblate spheroids.

“Well, why don’t you try football? You can play for our professional team,” said Genko, who was now the team’s general manager.

I hadn’t played football before, on account of its striking me as a collegian’s game. I wasn’t some satchel-toting fraternity man and I made my objections clear. “Look now, Genko, if you think I’m going to wear a varsity letter jacket and serenade my best girl with the ukulele, you’ve got another thing coming.”

“‘Herc,’ I know you’re above all that muss and fuss, and I want to reassure you that the pro game is as rough as it gets. There’s no hand-holding or wet-nursing with those surly louts.” I decided to take Genko at his word and gave football a whirl. As things turned out, it was the smartest decision I ever made. I set league records for touchdowns, tackles, yards, and darn near everything else during my first season.

In my second tilt, our coach Radcliffe “Rads” O’Steppe retired and I took his place. We’d been good before, but with me at the helm we developed all the renowned formations and plays: the belt loop toss, the big dipper, the bindlestick breakaway, carrying the banner, the castor oil catch, the dry heave, glad rags, spear biscuits, and the cannonball.

For a decade, the pro game was good to me. The Cleveland Spartans football club won 10 consecutive league championships and never lost a game during the regular season. Then a bunch of spineless sports reporters started writing a lot of bilge and baloney about how this was bad for the game. They said that a lack of competition was bankrupting other teams and reducing fan interest.

Nuts to that, I said. Who cared if people watched the games, so long as I was getting my points, touchdowns, and wins? Nobody ever said that life was fair. Did I start out with as much money under my mattress as beloved billionaire Pastor Prosperity Jones has under his? Of course not, folks—I’ve never even owned a mattress! It’s a jungle out there, and you’ve got to fight the other humanzees for the choicest tree house and the best coconut drums. It just so happened that “Herc” here was the scrappiest ape around, and those sweethearts couldn’t handle it.

So you know what I did? I got my team together—my beloved “Soda House Crew”—and told them that I was hanging up the spikes, the sidearms, and my grenades. If some pencil necks with Phi Beta Kappa keys wanted to write a bunch of hot takes, they’d have to do it about something other than my nonpareil prowess on the gridiron.

Well, the “Crew” took it about as hard as any bunch of swells ever took anything. Aces like “Old Bear” Huggins and “Turkey Shoot” Jones would’ve given their lives to win a football game, and Jones proved it when he died of a heart attack trying to block a kick.

“‘Herc,’ I wanted to stop them from getting that extra point, but I guess I didn’t have the heart,” he told me just before expiring in my arms.

See, there’s a story the likes of which isn’t heard these days. Nowadays the stars are concerned with their flashy Walkman radios and tabletop convection ovens, but “Turkey Shoot” was a player who cared only about his teammates.

After I left the pros, football became as bad as baseball: Different teams won the title every year, and a bunch of players all claimed they were the cat’s pajamas. It strikes me as odd that the fans, always a fickle bunch of lames and squares, want the league to be a junkyard where nobody knows who the top mutt is. That seems mighty disorderly, wouldn’t you say?

It wasn’t easy, watching from the sidelines. I came back in the twilight of my prime to coach the State University of State eleven, but those namby-pambies had been so pampered by their previous coach that they refused to take direction from an honest-to-goodness field general.

The chancellor fired me after I beat “Toe” Beans, our team’s ostensible star receiver, half to death during one of my stirring locker room orations. When I tried to explain that I was using a tried-and-tested motivational technique to put the fear of the lord into these mollycoddles, he threatened to press charges.

So that was it for “Herc” and the sports racket. I’ll say this: It isn’t like it used to be, and it stopped being that way the minute I called it quits. Everything I see today is terrible. Nobody knows how to hit a ball, hurl a pitch, or steal a base. I want to puke when I watch some so-called “All-American” player miss a free throw or throw the ball past the cutoff man. Not one fundamental technique is taught or observed by anyone.

The fact is, our society’s been in the crapper for a long time. You can’t get a good version of anything, be it a foodstuff or a pair of pleated-front khakis, and all the other nations are taking things over slowly but surely. There isn’t any work ethic or want-to left in a country where fathers used to abandon their young if the babies couldn’t swing pickaxes or lay rail by the time they were teething.

“You’ve got to go strong if you want to go places,” coach “Rads” used to tell me. He was as right as rain, and now that everyone’s as soft as a sheet of Gayetty’s Medicated Piles-Reducing Sanitary Paper, we’re poised for an even more precipitous tumble. When the chips finally go down and this do-nothing government stops honoring your pensions, triple coupons, and winning lottery tickets, you’ll realize that “Herc” was laying out the cold, dead truth the way he used to lay out opposing defenders with his famous “Black Betsy” stiff-arm.