Walking Ravenswood to the Upper East Side 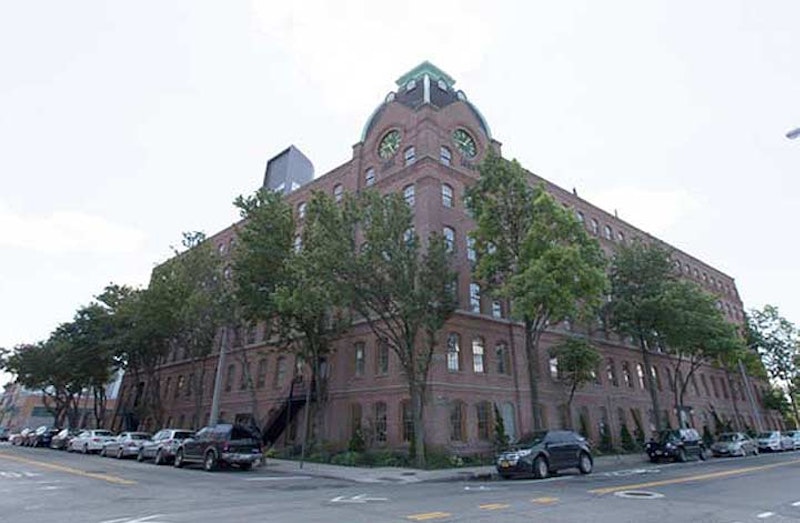 As followers of my website Forgotten New York know, I do tours in different locales around town about twice a month during the spring, summer and fall—check the site for schedules, meeting times and locations. I’m going to show you the highlights of a proposed tour I haven’t done yet that might be fascinating. Just the highlights here—I really get into the infrastructural minutiae on the tours. It’s possible to walk from Ravenswood, or just about any part of Queens, to the Upper East Side, but instead of walking the Queensboro Bridge—which I don’t do often, finding it tedious—I’ve hit upon a much more interesting way of doing it with just a bit of help from the MTA, and I don’t mean a subway.

Beginning in Ravenswood, the western end of Long Island City along the East River, Vernon Blvd. was once lined with mansions overlooking the river, but one by one they disappeared, leaving a mix of factories, shopping centers like Costco, and the huge Big Allis Con Ed plant.

I first encountered this building, originally the Sohmer Piano Factory on Vernon Blvd., several years ago when it was still occupied by the Adirondack Chair Company and spoke with John Pupa, Vice President of Operations for Adirondack. He said that Adirondack no longer heated the building with coal but it still maintained its old Hewes and Phillips coal-burning oven and took coal deliveries.

It’s not the only piano factory converted to luxury in NYC of late—I was taken by surprise to discover that the fortress-like, hulking Steinway factory on Ditmars Blvd. and 45th St. in Astoria became the Pistilli Grand Manor, and the clock-towered Estey Piano building and its distinctive clock tower in the Bronx’s Mott Haven became residential in the early 2000s. 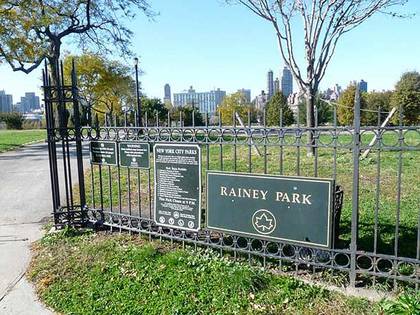 The Queens East River bank features a number of parks—some newly created (over the last 20 years or so) like Socrates Sculpture Park and Gantry State Park in Hunters Point, and some that have been there for decades yet only locals know about, such as Rainey Park and Queensbridge Park. Rainey Park is named for a local Ravenswooder who advocated for an East River bridge connecting Queens and Manhattan.

Dr. Thomas Rainey (1824-1910) along with other locals, agitated for a bridge to Manhattan beginning in the post-Civil War era, and formed the New York and Queens County Bridge Company, promoting the bridge as a catalyst for developing growth in Queens and as a railroad link to Long Island. That effort fell apart during the financial “panic” of 1873. Undaunted, Rainey formed the Committee of Forty to keep the bridge’s hopes alive despite the opposition of the War Department (today’s Department of Defense) which feared bridge construction would interfere with ship construction in the Brooklyn Navy Yard. Finally, lasting momentum was reached by century’s turn, and Rainey crossed the new Queensboro Bridge with Governor Charles Evans Hughes on opening Day in 1909, before passing away the following year. This park was dedicated with his name in 1912. 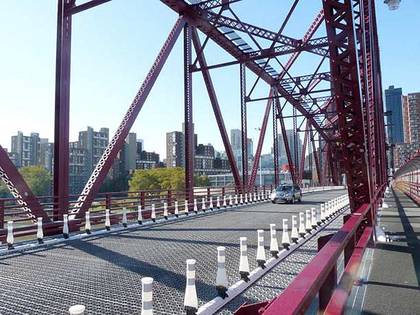 Though Roosevelt Island is technically a part of Manhattan, between 1958 and 1976 the only way to get there with wheeled transport was by a bridge at 36th Ave. and Vernon Blvd. in Ravenswood. (Before 1958 a trolley would let you off on the Queensboro Bridge, where an elevator would transport you to the island; either that, or you crossed in a boat.) The bridge is still the only way to get there by car or bus. The lift bridge (the roadway is relatively rarely raised to allow East River shipping to pass) was opened in 1955 and was originally called the Welfare Island Bridge; the island has had three names after Europeans arrived en masse in the area in the 1600s: Blackwell’s Island, for a local landowning family; Welfare Island (it was mostly used for asylums, hospitals and institutions until the 1970s) and finally, Roosevelt Island, after Franklin Delano Roosevelt in 1973. 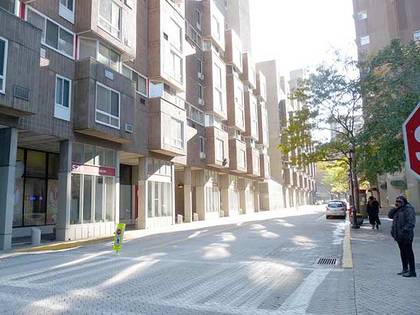 By the 1930s the era of institutionalization on Welfare Island was winding down. Goldwater Memorial Hospital (not Barry but Dr. S.S. Goldwater, Commissioner of Hospitals) opened in 1939 and Bird S. Coler Hospital in 1952. The rest of the island was in ruins by this time.

Various plans for park and residential development, including a subway connection, began to circulate in the 1960s. Finally, a plan envisioned by legendary architect Philip Johnson and John Burgee was decided upon. The Urban Development Corporation, inaugurated in 1969, hired developers and construction began. At first, Roosevelt Island featured high-rise developments with a promenade on the eastern and western sides of the island. No dogs were allowed at first, and cars were discouraged (they were allowed only in the parking garage near the bridge; buses transported people up and down Main St., the one of two named streets in the development). 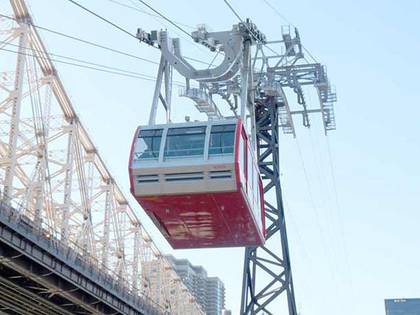 The Tramway is managed by Interfac, a division of JWP on behalf of the Roosevelt Island Operating Corporation of the State of New York (“RIOC”). RIOC is a state public benefit corporation created in 1984 to run the island’s services and complete the island’s development.

The Tramway is unique as the only aerial commuter tram in the United States. It was designed by Vonroll of Switzerland and travels a distance of 3100 feet. Since it actually rises above the slightly off-parallel Queensboro Bridge, it provides excellent views of that structure, as well as panoramic views of the surrounding area for miles, but note: the trip takes just over four minutes. For several years after the subways switched over to farecards, entering the tram was still done by placing tokens in turnstiles. The Roosevelt Island Operating Corporation had never reached an agreement with the MTA to install farecard machines, which first started appearing in 1994. As a result, the tramway was the token’s last redoubt. Farecards were finally instituted in 2004. 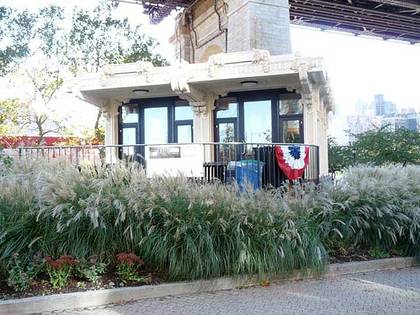 At the tramway entrance, there’s been a new addition: one of the ornate entrance/exit kiosks formerly found at 2nd Ave. Queensboro Bridge traffic funnel, now serving as a visitor center. There were four of these that served as entrances and exits to the trolley line that worked the bridge. For several years, this one served as the entrance gate for the Brooklyn Children’s Museum in Bedford-Stuyvesant, Brooklyn before a reconstruction forced it out. One of the kiosks has remained, almost by default, at 2nd Ave. 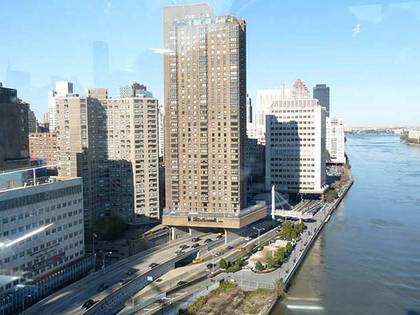 The tram ride produces some of the more expansive views of Manhattan available anywhere for the price—skyscrapers such as the Empire State and 1 WTC charge exorbitant amounts for such views on their observation decks, but the tram is available for just $2.75.

There are two campuses, or complexes, in Manhattan founded by the Rockefeller family. Looking north from the tram along the East River western shore is the Rockefeller University campus, with the high-rise Scholars Building (1988) seen here in the middle. To its right is one of what had been  two small cable-stayed pedestrian bridges in NYC; the other one spans 46th St. over 12th Ave. at the Intrepid Museum. Much larger cable-stayed bridges have recently been built: the new Kosciuszko and Goethals spans. 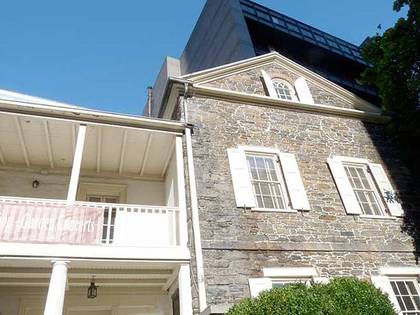 After getting off the tram I headed east on E. 61st St. to one of the oldest buildings in the area, the Abigail Adams Museum, alternately the Mount Vernon Hotel. It’s fairly difficult to photograph on sunny days, as it’s surrounded by tall buildings that cast their shadows on it.

The stone building with the two-level white porch on E. 61st St. west of York Ave. doesn’t quite parallel the street it’s on, and seems to carry an air of faded dignity and separation from the surrounding structures. It’s the remnant of an estate purchased in 1796 by William Stephen Smith and his wife Abigail, the daughter of President John Adams. The main mansion was lost in an 1826 fire, while the carriage house, the building that remains today, was employed as lodging for northerly travelers and people wishing a day in the country between 1826 and 1833. The hotel closed that year after only about seven years of operation.

The house remained in private hands until 1924, when it was purchased by the Colonial Dames of America, refitted with historical effects and rechristened as a museum in 1939. Presently, the house is open to the public and offers a fascinating look at when its surrounding area was considered a respite from the madding crowd. On display you’ll find a tea set owned by John Adams, a Louis Philippe crystal chandelier, playing cards (without numbers, in an era when just a small percentage of the population could read) and kids’ toys from the 19th Century, a French barrel organ, quill pens and spittoons. There’s a quiet outdoor patio out back. Call (212) 838-6878, or visit www.mvhm.org.