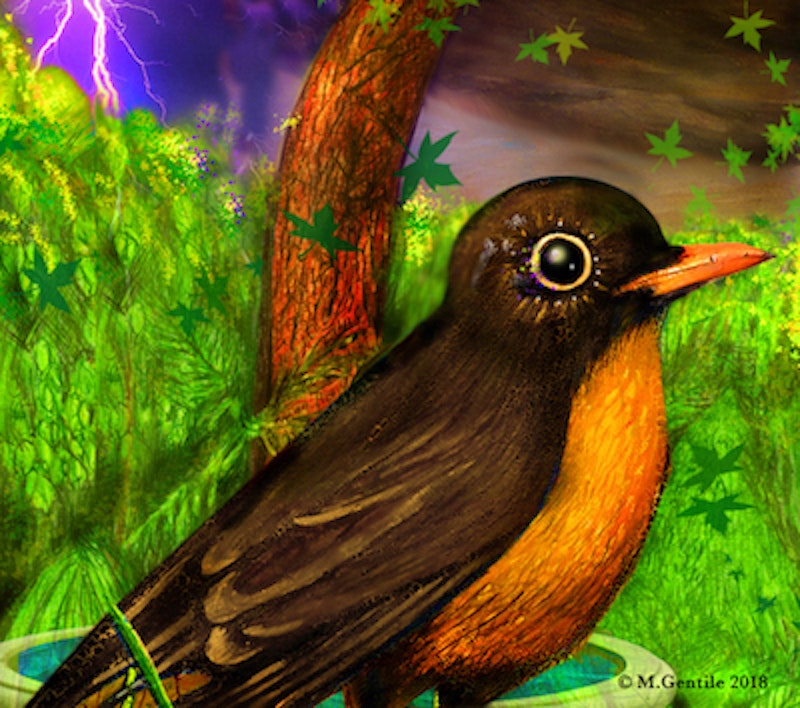 Rays of misty morning light filter through a cove of towering pine trees. A sparkling spider web is covered in dewdrops. Be near a landscape that unveils a summer garden in full bloom—a delicate selection of creatures and plants—a collection of orange daylilies, pale blue hydrangeas and green hostas. Gardens foster an environment of peace, but sometimes nature is savage.

Before the day’s triple-digit temperatures kick in, a house wren knows there’s not a moment to spare searching for a nesting place. The bird takes a moment to belt out a colorful, full-bellied warble before swooping away.

A cardinal runs a daily territorial flight check, flying around in circular patterns. In the pines, an agitated grackle’s raspy chatter adds to the symphony. Swirling butterflies dance a tango. Bumblebees pollinate. A garden’s tranquility is intoxicating.

In the middle of this green, there’s a birdbath. A dirty robin decides to take a bath. There’s a chance a neighbor’s cat is looking out the window thinking about lunch. A quick dip makes it worth the risk; the keen bird keeps its eyes peeled.

Bobbing away, splashing the tepid water, there’s wing flutter and nit-picks. Check out the suave bird’s plumage: a subtle tone shift reveals an orange chest with grayish brown feathers. The “Sinatra” member of the thrush family is a vibrant singer. The crooner’s hits include: a common whistle, a cheeky, hyena-like laugh and the nervous “cluck.” That’s the sound made when an intruder comes too close to a roosting area. So if you’re walking past a robin nest, be warned, you might get chased.

The robin is an aggressive fighter. When a scofflaw blue jay’s in attack mode, their conflict culminates in a showdown. Now the birdbath serves a duel purpose: an impromptu fighting ring. The drama’s quick, minus a few feathers. A robin will buckle under in defeat and fly away—they’re not a “to death” blood sport fighter like a rooster.

My grade school friend Susan recently reminded me that when she was young, girls didn’t watch birds. She’s probably right; I never gave it a thought. As a kid we had a pet parakeet, so birds always intrigued me. I also remember spending hours at the local Kresge 5&10. The bright wooden pet department was stocked with baby-red ear turtles, canaries and goldfish. I’d daydream at the store’s soda counter, thinking about a bird watching career as an ornithologist, before downing a melting banana split. The dog-eared book hanging out of my jeans back pocket: Birds, A Golden Nature Guide. The easy read cost one dollar and had lots of great illustrations. My favorite birds were covered with chocolate fingerprints.

The garden’s silent and the birds are gone.

When the sky turns angry, a summer day becomes dangerous.

One July afternoon in Double Rock Park, the Hamilton Little League was losing: 5 to 1. A fretting team of fourth graders watched the Parkville Knights score another run. Then something happened, something that shouldn’t have happened, but did. That something only took a second, in what felt like an unfathomable length of time.

A dark line of dramatic cumulonimbus clouds thickened the horizon sky. Agile infielder Jimmy Cireo was holding tight, between second and third at shortstop, unaware of the approaching mountain-size threat forming behind him.

So then the sky consumed Jimmy, struck by a direct bolt of lightning. Loud thunder rumbled as his motionless body lay face down in flames by third base, smoke rising from a pair of charred shoes. The teams were scared as hell. Feeling helpless, they huddled together in the dugout mourning Jimmy’s death until the rain stopped.

It wasn’t until a few years later in seventh grade science class I fully understood the dangers of lightning. On average, it’s estimated over 300 people get struck by lightning in the U.S. every year. Leisure activities like golf and baseball account for fewer deaths from direct lightning strikes than the number one activity, fishing. According to NOAA, the day and month with biggest strikes is: Saturdays in July.

The most dangerous spot to be in a thunderstorm is standing in a field, second place, under a tree. Lightning is attracted to the highest points, so “standing out” in any way, makes the perfect target for a deadly strike.

But nothing’s certain when it comes to lightning. As the saying goes, “If you see it, flee it.  If you hear it, clear it.” Lightning is unforgiving.

After a summer storm passes the first thing you notice is the peace, a sense of perfect calm. The soil is soaked. Tiny bubbles percolate in puddles. Earthworms emerge and wriggle their way to the surface to start a treacherous migration journey. Heavy rains bring the nightcrawlers out from under the ground. Ask a soil expert and they’ll tell you after a good soaking, worms can cover a lot more mileage across slick terrain versus dry soil. Or are they just looking for a mate?

It’s hard to know what a worm is thinking any day of the week. Earthworms don’t drown the same way humans do; they breathe through their skin, hence enjoying moist environments. So why do worms appear after a storm? Thoughts range from the creatures being in tune with thunder and raindrop vibrations to fleeing the pursuit of a killer mole.

In the end, a worm’s escape may be fleeting. The robin’s back and ready to pounce, positioned directly above its next target. In man’s attempt to tame nature, a backyard garden offers the perfect summer oasis.