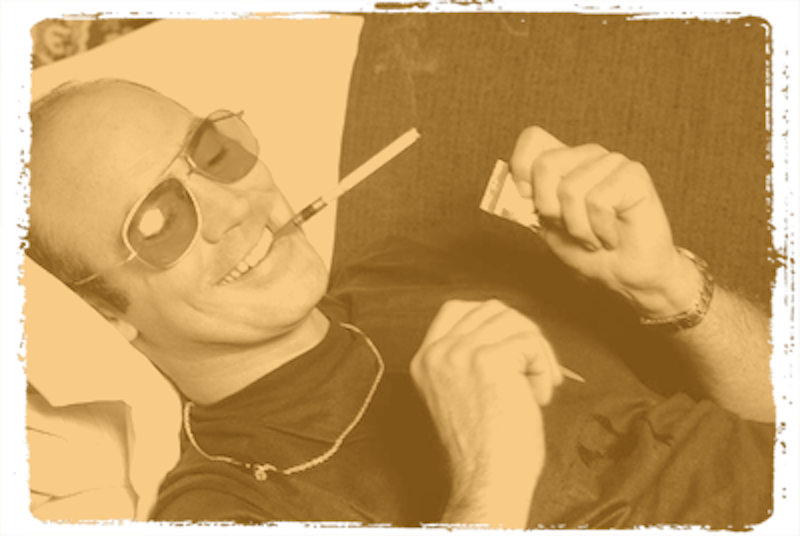 I spend exactly two minutes every year—give or take a couple of seconds—watching horse racing on TV. Saturday is Kentucky Derby day, and I’ll be watching, as always. It’s the most American of things to do, and I relish the opportunity to participate in the national culture, especially when it requires such a modest investment of time.

A deeper reason for always watching the Kentucky Derby dates back to the 1970 race, which produced one winning horse—Dust Commander—while serving as the launching pad for what was soon to be known as “gonzo journalism." Hunter S. Thompson, the inventor of this new form of writing, wrote “The Kentucky Derby Is Decadent and Depraved” after attending the Derby with the illustrator Ralph Steadman in a whiskey-fueled haze.

Wikipedia refers to the Kentucky Derby article as a “seminal sports article,” which is laughably off the mark, as Dust Commander’s name is never even mentioned. What is seminal about the piece, though, is that nothing quite like it had ever appeared in print before Scanlan’s Monthly published it in June 1970. “Objective journalism” was the standard writers were held to in those times, but Thompson's talent was too transcendent to be constrained by such an unimaginative, fact-based format. Thompson was in agreement with William Faulkner in the belief that the best fiction produces far more "truth" than any kind of journalism. Once he’d sufficiently recovered from his soul-shattering post-Derby hangover, the native Kentuckian began tapping on the keys of his IBM Selectric, laying down the gonzo blueprint. What he would produce would be the very first piece of gonzo journalism ever written.

Reading the Scanlan’s piece must have been a head-scratching experience for any reader expecting standard sports writing. Where was the description of the race, horses, and other things Derby-related? Thompson—who was sitting too far from the track to really watch the race—instead boozed it up with sidekick Steadman and set out to find a face in the crowd that was a “symbol of the whole doomed atavistic culture that makes the Kentucky Derby what it is.” Thompson viciously lampoons the drunken “fat cat” members of Louisville (his hometown) society.

There are no set rules defining gonzo, although Thompson maintained that a good gonzo journalist "needs the talent of master journalist, the eye of an artist/photographer and the heavy balls of an actor." The gonzo writer is often in the middle of the story as a participant, or even protagonist. He employs the narrative techniques of a novelist (among them, shifting point of view and stream of consciousness) and makes no pretense of telling a "balanced" story.

Thompson reached his gonzo apex with his masterpiece, Fear and Loathing in Las Vegas, originally printed as a two-part series in Rolling Stone in 1971. Beyond chronicling the drugged and drunken hijinks that occurred during HST’s two trips to Vegas in March and April 1971, Fear and Loathing offers bittersweet insights into the hope for a better future that the 60s counterculture movement offered, and its eventual failure to deliver the goods. Thompson was, at his core, an idealist who harbored a deep resentment against the greed, hypocrisy, and arrogance of America’s leaders and the society they helped spawn. Rage is what fueled his best writing, along with the booze and drugs, and what powerful and elegant writing it was while he was still in his prime.

The rage eventually consumed avid gun enthusiast HST, although perhaps he was able to release some of it by shooting various inanimate objects in his back yard at Owl Farm (his home near Aspen, Colorado) with his extensive firearms collection. As the author aged, his writing became more mannered and less powerful, and his bitterness was more pronounced. I prefer to put this aside, though, and remember the Thompson who loved betting on NFL football games, writing endless numbers of letters, running for sheriff of Pitkin County on the Freak Power ticket, pulling wild pranks on his friends and voraciously consuming drugs.

Thompson, with his groundbreaking, daring gonzo journalism, is a reminder of a time when a handful of ambitious journalists (also including Truman Capote, Tom Wolfe, Norman Mailer and Gay Talese) were audacious enough to try and make art. His style was sui generis—anyone attempting an imitation is immediately exposed as a poseur. As an aficionado of great writing, I owe a great debt to Thompson. So on Saturday, although I have no seersucker suit to don, I will make myself a mint julep and watch the Kentucky Derby in remembrance of one of the great, original voices in American literature. I will celebrate the great Hunter S. Thompson.