The Idiosyncrasies of Immigrant-Owned Retailers

Baltimore needs more of these shops. 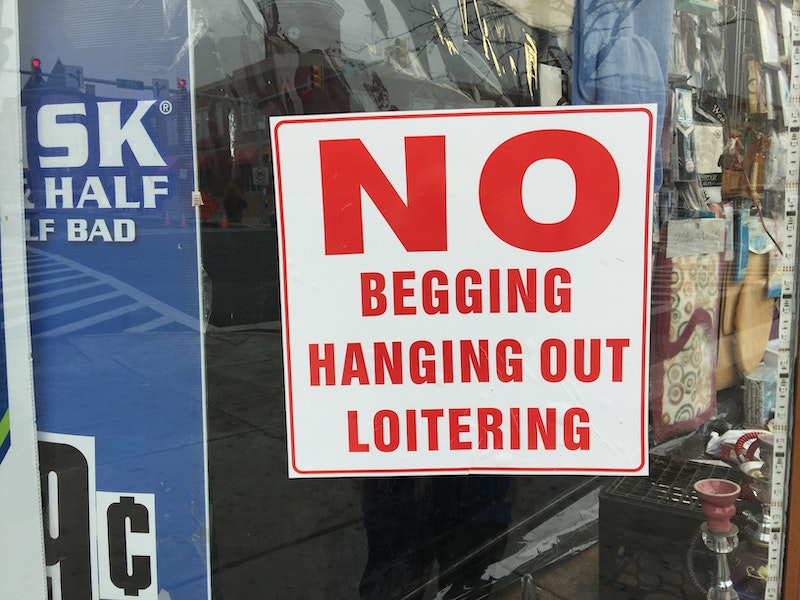 Every weekday, while walking down N. Charles St. in Baltimore on a coffee run, I get a boot out of the sign affixed to a window of the discount store Queen of Sheba. As you can see above, it reads: “NO Begging. Hanging Out. Loitering.” The owners are immigrants—from what country, I’m not certain—and I wonder if they’re familiar with the American colloquialism “hanging out” or if the directive was just purchased from a store that sells that sort of item. And what’s the difference, precisely, between “hanging out” and “loitering”? The former, I’d say, is less threatening than the latter, since there’s no implied mischief suggested. When parents ask their kids how they spent a Saturday afternoon, say, “I was hanging out with friends” is a far more common response than “I was loitering with Billy and Bobby outside a deli.” In fact, I can’t recall ever telling anyone I was “loitering,” even if that was perhaps the case.

As it happens, the sign doesn’t shoo away anyone from this relatively busy corner of N. Charles and 25th Sts. There’s usually a crowd of people in front of Queen of Sheba—some waiting for a bus, others panhandling, still more just hanging out—and as I’m a brisk walker, it requires a bit of dodging to negotiate my way through the scrum. As I used to tell my sons when we went for jaunts in Manhattan, “find the hole!” to beat our way from Tribeca to 14th St., leaving the tourists, slowpokes and “loiterers” in our dust. Not that I’ve ever seen a Sheba employee/owner come outside and attempt to disperse the gaggle of Baltimoreans, so I suppose the sign—ostensibly a prophylactic—is just an empty gesture.

I don’t often patronize Queen of Sheba, mostly because they don’t peddle my brand of smokes and I have no interest in the selection of bongs, pipes, rubber gloves, two-liter bottles of Pepsi (until they’re banned), plastic forks and knives, dirt-cheap shirts, chewing gum, detergent, deodorant, candles, tins of Folger’s coffee or incense. Also, truth be told, the store is sort of off-putting: the security is intense for a tiny retail outlet, which reminds me of an airport, and who needs that? In addition, the clerks aren’t always friendly, which, in fairness, could be due to the amount of potential shoplifters they’ve got to train their eyes on.

Nevertheless, I’m glad Sheba, essentially a “dollar store,” exists—the storefront, long ago a Copycat stationery stop, was vacant until the owners put roots down—since anything’s better than another boarded-up building in this oddball city. I hope Baltimore’s inept city government gave the proprietors a tax break, or some other incentive, to open its doors, but that’s doubtful since downscale shops—the kind that would never be seen in the catered-to Harbor East—are treated like shit here. It’s not so different (although much smaller) than the Woolworth’s of my youth, or more specifically, the John’s Bargain Store in Huntington, a chain location that sold the same sort of rubbish. Rubbish, that is, that came in handy at times: pencils, notebooks, boxes of matches, lighter fluid, cough drops and a long list of products that you’d need a couple of times a year.

More germane to the current xenophobia that’s infected most of the United States—the disgraceful proposed rejection of Syrian refugees (including Maryland yesterday) just a microcosm of this sorry cycle of Know-Nothingism—is that any operation run by immigrants is a welcome. In general, Maryland isn’t so bad on this score—the vast majority of the hard-working cabbies I know hail from a smorgasbord of countries, even as Uber is killing their livelihood—at least compared to the Nation of Ted Cruz, which encompasses more than just Texas. On that note, I’ll take my leave, for just the thought of Cruz leaves me reaching for the barf bucket.