Eventually, you’re going to get sick, whether you’re diligent or not. 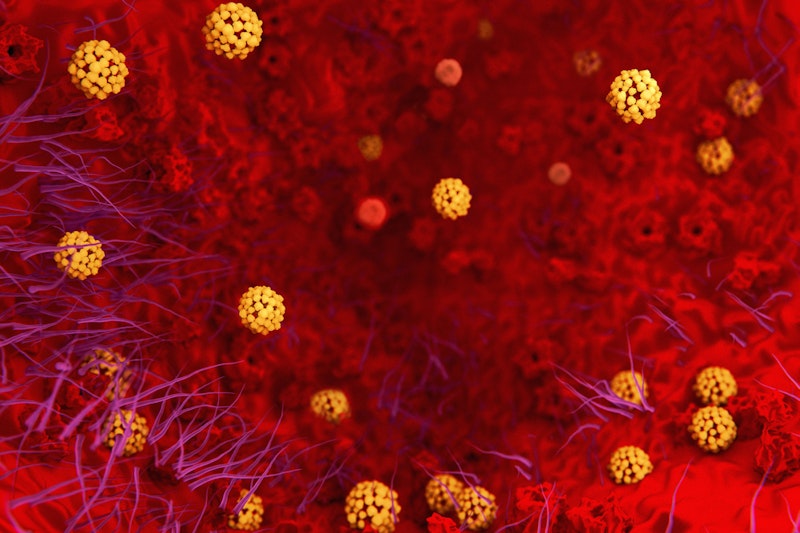 There are multiple ways to die from the coronavirus, but in some cases, the victim’s own immune response kills him. He dies of fever, or inflammation, as his body tries to fight the virus off. That is, metaphorically speaking, also the mostly likely outcome for our entire nation: we’ll suffer more from our responses to this virus than we will from the actual sickness.

I’m sure, over the past few weeks, you’ve begun taking the recommended steps. You’ve sterilized surfaces. You’ve washed your hands, more frequently, for longer periods of time. You’ve avoided large gatherings. But why are you doing this? Are you trying to avoid getting sick? Or are you trying to help mitigate its spread?

It’s tempting, I realize, to answer “both.” Unfortunately, though, this isn’t a virus from which you can protect yourself forever. It’s a completely new disease. You have no immunity to it, and neither does anyone else, unless they’ve already been sick and recovered. Because it’s highly contagious, incubates for weeks, and sometimes produces no symptoms, the disease is going to prove impossible to control. Its progress can only be slowed. So, eventually, you’re going to get sick, whether you’re diligent or not. You don’t have to take my word for this. Harvard epidemiologist Marc Lipsitch told The Atlantic the same thing: “I think the likely outcome is that it will ultimately not be containable.” Bloomberg, reporting on the British response, wrote that “at the heart of the U.K. strategy is a realization that, if coronavirus continues to spread, it will be impossible to stop most people catching it.”

You may also want to read this article, posted to Medium by Tomas Pueyo. Using a staggering number of graphs, Pueyo demonstrates that the “true” number of coronavirus infections—which means guessing how many infections we haven’t yet detected—is much larger than the official tally. This seems obvious, but a reasonable estimate of those numbers puts the “true” caseload so high that (in the United States, at least) containment is clearly impossible. So many Americans have the virus already that we can’t hope to achieve anything merely by putting symptomatic individuals and international travelers under quarantine. Matt McCarthy’s tweet, from March 3rd, is absolutely right:

Like many climate scientists, Tomas Pueyo sees himself as Cassandra, the prophet whom nobody heeds. Furthermore—again, much like climate scientists—he offers us a chance at redemption: “The only way to prevent this is social distancing. Not tomorrow. Today. That means keeping as many people home as possible, starting now.” What Pueyo has in mind, really, isn’t covered by the euphemism “social distancing.” He’s talking about a lockdown. Schools close, businesses close, public transportation is suspended, and public gatherings become illegal. This is what China did in Wuhan; in Italy, the lockdown is now nationwide. Many places in the United States are inching towards something similar.

Unfortunately, lockdowns aren’t particularly effective. Permit me two observations. The first concerns Pueyo’s claim that (starting around the time of Wuhan’s lockdown), containment efforts were “well-coordinated by [China’s] central government,” thanks to “immediate and drastic measures” that proved highly successful. He is echoing no less an authority than the World Health Organization, which proclaimed on February 24th that “China’s bold approach to contain the rapid spread of this new respiratory pathogen has changed the course of a rapidly escalating and deadly epidemic.”

Back then, we were dealing with around 80,000 confirmed cases of COVID-19. Three weeks later, the caseload has doubled. So much for changing the course of the epidemic. But what about China itself? China had 77,150 confirmed cases on February 24th, and had seen 2592 deaths. As of today—March 16th—it has 80,800 confirmed cases, including 3199 deaths. That means the mortality rate is going up, from 3.3 percent in February, to almost four percent now. During three weeks when the Chinese government was supposedly fully mobilized, and doing widespread testing, the disease somehow became a lot more deadly. Or, rather, that’s one possibility. The other is that China’s numbers are unreliable, either because of problems with its reporting system, or because they’re deliberately fudged. After all, in every single other country where containment has failed, there was a decline in mortality rates once the number of confirmed cases began to rise. And let’s not forget China's initial response to the epidemic, which was—as Anne Appelbaum reports—the “terrifying and reckless behavior of the authorities in Wuhan, China, who initially threatened doctors who began posting information about the new virus, forcing them into silence.”

The second half of Pueyo’s lockdown thesis is based on a study of citywide measures that were implemented, with varying degrees of success, during the flu pandemic of 1918 and 1919. Take a look at the following graph: 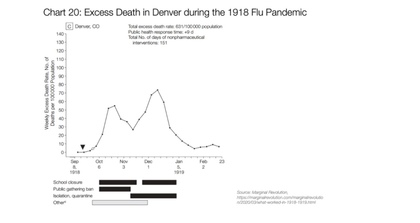 According to Pueyo, Denver “enacted measures and then loosened them” before the epidemic was fully contained; as a result, the flu peaked twice. That’s true—but look again at what specific measures were enacted, and when. Denver is an extremely useful case because only one variable affects the excess mortality rate: whether or not the schools are closed. Neither the public gathering ban, nor the isolation/quarantine of ill persons, nor staggered business hours (“Other”), made any difference at all. Why were school closures so effective at reducing mortality? Because children were the most likely to die, and children don’t congregate in large numbers, other than at school. If we could achieve the same results with the coronavirus, I’d be in favor of extraordinary measures. We can’t. The virus’ mortality profile is not at all like the flu; it’s most dangerous to older people, but everyone can get it and spread it. There’s very little targeted action we can take. We can try to isolate nursing homes. Beyond that, “preventive measures” means closing down everything, and keeping it closed until the virus goes away.

But when, exactly, is that going to happen? Even if 20,000 people are currently infected, with most of them still in the incubation period, that’s just 0.06 percent of the population. Furthermore, let’s assume that an uncontained, unmitigated epidemic would have a peak infection rate of 67 percent, ultimately infecting 221 million people. It will still take at least two full weeks, starting now, for the infection to reach its peak. Then it would take another two weeks for most of the infected population to show symptoms, and another two weeks for them to recover (or die). That means the end of April—if nobody was doing anything to halt the spread, and the conditions for transmission remained absolutely optimal for the virus.

But lots of institutions, businesses, and schools are shutting down. Infected individuals are being isolated and quarantined once their infection is confirmed. International travel has ground almost to a halt. We are taking steps to slow this virus down, and I’m sure these responses will make some difference. Then the question becomes how long we can hold out—because, as the influenza statistics from 1918 clearly demonstrate, the infection rate resumes growing exponentially if we rescind “social distancing” and lockdowns too soon.

How many business owners can keep their stores shuttered for two months? How about for six months? (Mayor Bill de Blasio, of New York, was quoted in The New York Times saying he expects the city’s current emergency measures to last that long.) How many schools are planning to remain closed this fall, except for distance learning? For how long should we suspend freedom of assembly? The goal of “flattening the curve,” modeled by this Washington Post article (among many others), assumes that at least 75 percent of the population can remain in total isolation on any given day. When I ran the Post’s simulation, furthermore, the number of sick people never reached zero, or anything close to it, under conditions that are already extreme and unrealistic. The simulation ended with an infection rate of 15 percent.

That rate of infection would be a chronic rate, not a peak. Yet it's already far beyond anything our healthcare system or working poor can handle. (Read more about that here.) You can flatten the curve, but you can’t stop what’s coming; you can merely delay it. Nobody, as yet, has persuaded Donald Trump’s administration to increase coronavirus testing, provide comprehensive paid sick leave, or increase surge capacity in our hospitals. So, in the meantime, we wait. Everyday life will go on, but it can certainly become more lonely, paranoid, and frustrating than it is right now. I won’t accept an Italian-style lockdown here. I won’t sacrifice the connections that make life worthwhile to protect myself from a virus that can’t be stopped.