A freebie loosie for you, Burt. 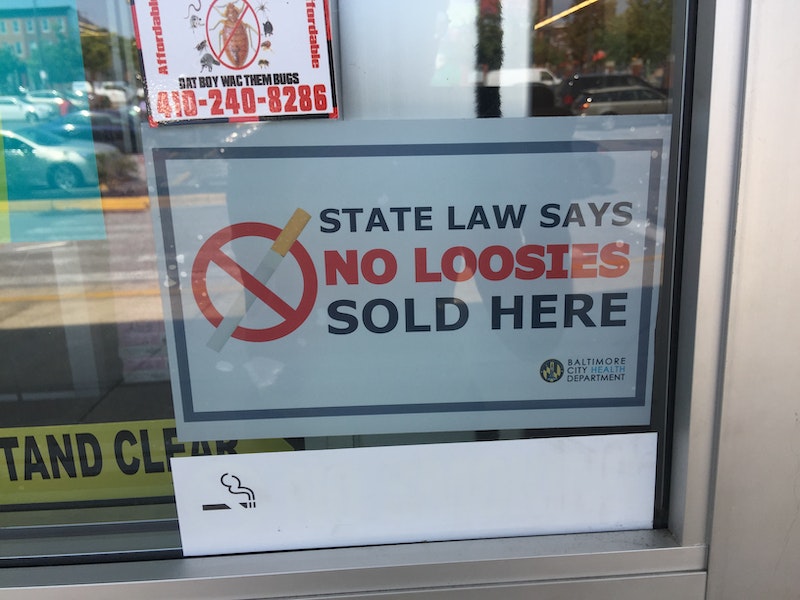 No idea why but until a few weeks ago, I didn’t notice the small sticker (pictured above) on the front door of a big Safeway on the 2400 block on N. Charles St. in Baltimore that reads, “State Law Says No Loosies Sold Here.” Do other supermarkets sell loosies or is this just a scattershot warning? I didn’t even think loosies were a big deal anymore, at least in legal or illegal commerce. I remember in the 1980s and '90s a lot of bodegas sold the single cigarettes—with prices rising every year—and I’m stopped on the street once or twice a week by a (usually) older man or woman who asks if he/she can buy a cigarette for 50 cents, and if I’m carrying a pack, I fork one over gratis, just out of courtesy. But at a Safeway? “Yes, in addition to the organic, unsalted almonds, Granny apples, dried apricots, coffee, light bulbs, Gulden’s mustard, chili cheese Fritos and pitted dates, I’ll have a book of stamps and four loosies.”

As everyone knows, smokers are social lepers today, and have been since the cascade of bans two decades ago about smoking on airplanes (unimaginable to those born in the 1990s), bars, restaurants, trains, and office buildings. I’m a moderate smoker: you adapt, and it’s second-nature now not to smoke in the house, but rather take it outside and risk the hairy eyeball from neighbors. None of which bothers me: a nicotine habit is bad business, on a health level, as we’ve all known since the 1960s.

Here’s what irks me. Alcohol products, whether it’s beer, wine, or spirits, are, in immoderation, far more dangerous, short-term, than tobacco. Hardly anyone cracks up a car when smoking a cigarette, or misses work, or screws up their family lives. Yet the hypocrisy about advertising the two vices is astonishing. I happen to believe that companies producing legal products ought to be allowed to hawk their wares on television, but that hasn’t been the case for tobacco since the late-1960s, and the government took a self-righteous bow for its vigilance. Yet, booze, especially beer, is all over the tube, particularly ubiquitous on sports broadcasts. On MASN, the station the carries the Orioles and Nationals games, O’s commentator Gary Thorne, around the 7th inning, does his sponsorship duty and tells listeners that it’s Miller time. And then there’s that annoying guy who recommends Dos Equis who pops up everywhere (and now pitching tequila).

And in case I’ve missed it, unlike cigarettes, alcohol containers don’t have the message “Excessive use can result in depression, addiction, or death.” It’s an odd double-standard. Likewise, since we’re a culture awash in prescription drugs, the pharmaceutical companies are on the air almost constantly, from the early morning talk shows like Today or Meet the Press to cable news at night. Those commercials, aside from the sheer banality of their images of happy, peppy people, spend at least half the time, in a nearly-silent voiceover, listing the 20 or so reasons why this or that particular drug might fuck up a pregnancy, lead to heart disease, week-long erections, or death.

In the same vein, why aren’t Apple and other makers of smartphones required to put a message on the box, saying, “Texting or talking while driving can cause accidents. Friends don’t let friends text and drive.” That’s a bit jocular, but we’re talking tech big business here.

As far as I can tell, the big push a few years ago to levy a regressive tax on soda, now almost uniformly dubbed “sugary drinks,” hasn’t caught on nationwide; maybe a few municipalities in Oregon, Vermont, and California. That’s positive, since in this age of uniform disgust for the country’s income disparity and the evil one percent—really, 10 percent, but “one” sounds better—a soda tax disproportionately hurts lower-income citizens, as do the escalating costs of tobacco. And from what I’ve read recently, McDonald’s and other fast-food chains, under such deluge just four years ago, are ditching the salads and “healthy options” and returning to their roots: calorie-laden triple burgers, fried chicken, shakes, and 60 oz. cups of Coke. I loved that grub as a kid—and as a young adult, it was affordable—but not anymore, but live and let live and get the government out of your kitchen.

There’s hypocrisy here as well: when I get a Starbucks coffee a bit before noon, often there’s someone ahead of me who orders a Frappuccino with whipped cream, caramel, and chocolate sauce, a dessert in a cup that’s about 4,000 calories. Why weren’t Starbucks, and other cafes, threatened with a tax for such excess? You know the answer, so end of lecture.