The Drugs I Take Are Moving 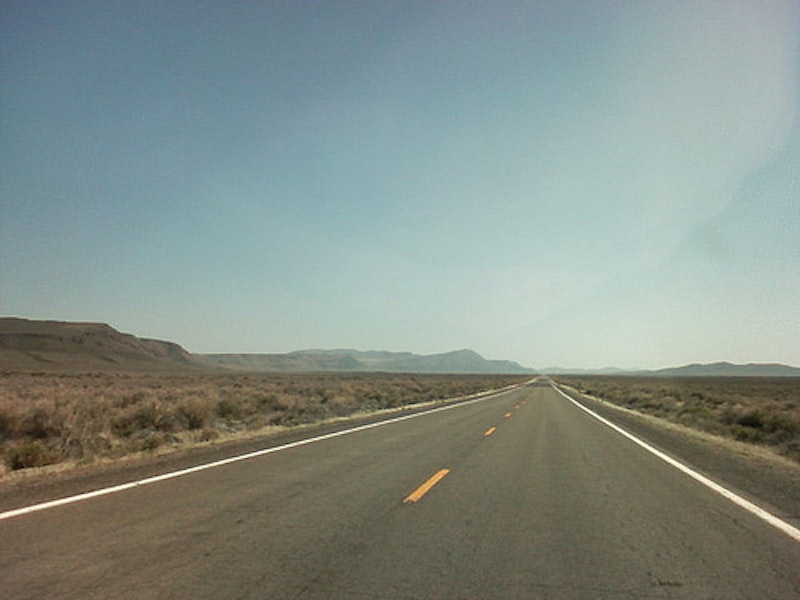 One of the great things about working as an itinerant artist is that you get to see weird far flung places that are way off the grid. Within the continental United States, east Oregon is about as far flung as a place can get. While the musical wing of Human Host never played there, we once had a great gig in Boise, which is only a few miles away from the Beaver state’s eastern border. Consequently, we spent hours driving across the roughly 400 mile expanse of Oregon on our way to tour the West Coast, and some of the patrons who attended our Boise show came from eastern Oregon towns. For those unfamiliar with east Oregon the term “moonscape” is probably the best way to describe this incredibly desolate underpopulated American region. Among the miles and miles of rocks and dirt, wild wheat stalks are plentiful and frequently gobbled up by the heifers and bulls who provide the area with two of its biggest cash cows:  the livestock industry and the rodeo.

Little rain ever falls on the arid plains of eastern Oregon, but countless tears have been shed over the lives destroyed when thrill seekers in this vast wasteland attempt to break the monotony by using methamphetamine, western North America’s most insidious and popular addictive drug. That’s why we were really taken by surprise when a nameless Human Host fan from east Oregon sent us a printed transcription of the extraordinary piece of writing you’re about to read. This appears complete with relevant notations that describe the original document’s condition. According to the anonymous sender, everything below has been quoted from a scrap of what was “an almost totally shredded piece of paper” discovered crumpled along the side of an unpaved rural Oregon road. No one knows for sure what this piece of writing may be. No one knows exactly where it originated either, but we feel that this is a lovely and important reminder of the fact that reality is the single most subjective concept in existence:

…eyes, which doesn’t really matter, even if they never existed… the sea of the unseen [maybe four or five illegible words] either because worrying is impossible when you can have trai [holes, and smudges in paper; probably 3 or 4 full sentences here are illegible] parents that worry, and the law officers worry too. I just want them to love me through this veil of energ... [illegible sentence] the veil I know they can glow and live and play. They fear me and they fear for my safety for all the same reasons. I’m [illegible word] reading in place of crucifixion and leisure. They want…[illegible sentence] disappearing at any time, just like a forgotten luck charm. The drugs I take are moving, I sink and dissolve in the revolutionary Christmas. My family, their veins…their natural drug-blood, drood or blug [many illegible words]

…but even years later, way after it happened for the first and most important time, I could see every detail in a snow flake, every last little shape that could make every different snow flake completely special and unique when compared to another. I could see it all nonchalantly!!! Without even trying! And this is just one small thing that really makes it easier for me to go about my business, to be humble, this makes empathy easier to feel. I love it. Everyone should have it, but no one should be forced to do anything, just make sure [illegible sentence] like the shaggy lovable old St. Bernard with the wooden barrel of hard liquor around its thick neck and the warm drool of his loving way a’stompin ‘round the Alps—a valiant search for poor souls in distress. That big dog’s there for safety for you and me and grandmas and grandpas and such... Luke warm lava babies in the holiday of forever, moss shines beneath a singing tangerine tre [illegible writing, dirt stains, smudges, holes in the paper]