Saving a view of the sunset for someone who matters. 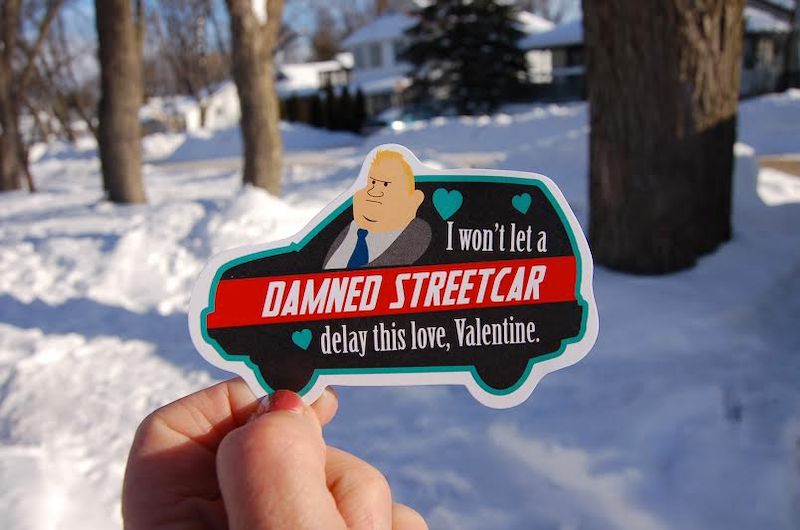 Toronto Mayor Rob Ford is my Valentine. His “300 pounds of fun” was flattened down into 110lbs heavy card-stock and placed in an envelope. It was mailed from downtown Toronto by my son and his wife.

Rob Ford is driving his Cadillac Escalade SUV and his message to me is: “I won’t let a damned streetcar delay this love, Valentine.”

Rob wants to get rid of the streetcars because they are impractical. I’ve lived in Toronto for most of my 60 years. We have the largest streetcar system in North America. They’re a pain in the ass, but I love them. Streetcars block traffic and if one breaks down, the ones that are behind can’t go anywhere. There is no turning back. There is something romantic about this archaic mode of transportation. When you get on the streetcar, you are connected to the city by the tracks and electricity pulsing through the overhead lines.

It becomes less lovely when you are standing in the cold for half an hour waiting for a streetcar. It’s about as romantic as Tennessee Williams’ A Streetcar Named Desire when the red rocket becomes the blue light special. People who are smart enough not to drive but dumbed down by too much booze pour out of the bars and on to the Toronto Transit System.

I’ve never had one of those movie trope moments on a streetcar where the driver slammed on the breaks and I was thrown into the arms of my soulmate. Years ago, I was sitting in the back seat reading a book when I felt something jostling me, followed by a feeling of something wet splashing my arm. I looked over to see the guy beside me had just finished jerking off. If he’d been interested in books, which I highly doubt, he might have wondered what author could capture my attention so intensely. I’m embarrassed to say I don’t remember.

I won’t be getting a Valentine’s Day card from a lover. Even the man who only smokes crack when he is in a drunken stupor has someone. I wonder what Rob’s wife is getting for Valentine’s Day? He gave her $5000 for Christmas because he says, “Women love money.” Maybe he is also going to give her some loving. When he was denying rumors that he told a woman he wanted to eat her pussy, he let the world know that he gets plenty to eat at home.

I wouldn’t want to be on the receiving end of Ford’s tongue, but I’m sad to say that I’m not getting that action from anyone. I tell myself I am okay with that and am used to it now, but it’s a lie.

Before I moved out of the city, I lived downtown where the screech and shudder of the streetcars was my lullaby. Even when I was sleeping alone, I felt like I was connected to something and that among the millions of people in the city, maybe there was someone for me.

I moved to a more romantic place where the lake offers a perfect vantage point for watching the sunset. The first night I slept alone in my cottage, the silence frightened me. What was even more frightening was the thought that now I’d be alone for the rest of my life because the pickings are pretty slim in this small town.

I love this life, but a lot of the men I have met have small-town minds. They are Stanley Kowalski to my Blanche Dubois. They wouldn’t understand how riding the streetcar late at night makes me feel like I am a passenger inside an Iggy Pop song and how I love that dark and delicious feeling.
The men I’ve dated here all suggested the same thing—“After dinner, let’s take a walk on the beach to watch the sunset.” That’s romantic, but to me it’s like a nano-sized version of proposing to a woman at a public sporting event. It’s something that men think they should do, but I’m going to say no and it’s going to be embarrassing. Unfortunately, the only man here who understands me is someone I can’t have because he is married. My streetcar is called “unrequited desire.”

I’m saving a joint view of the sunset for someone who matters, saving the stars that I couldn’t see in the city because of the ambient light. I’m saving them in my heart because I can see them whenever I want, whether I’m alone or not. If I meet someone who will eventually be my Valentine, we will walk on the beach, but we’ll also go to the big city and ride the crowded streetcar; our bodies feeling the rhythm of the tracks, and the anticipation of leaving the crowd and stepping into the night air together. We’ll be the passengers. “We'll see the city's ripped backsides. We'll see the bright and hollow sky.”