The Deep South of Central Park

South America has its own presence in New York City. 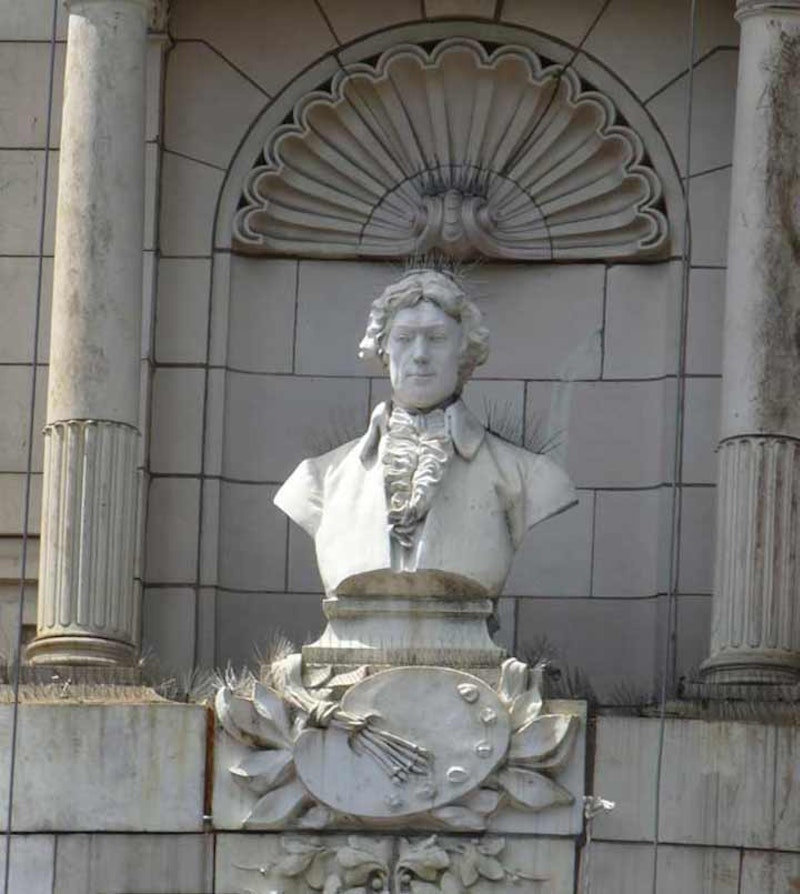 I’ve always considered Central Park a fertile territory for ferreting about for items to feature in my site Forgotten New York. When I worked at Macy’s from 2000 to 2004, I’d take the film camera, as well as a couple of spools of 35MM, and grab the train up there at lunch hour and spend a couple of hours walking around and snapping away; there wasn’t a punch clock there, and management didn’t seem to mind. Besides Central Park, I’d cover most parts of lower Manhattan and I even made my way into downtown Brooklyn on a couple of occasions, and more than one of the shots I acquired made their way into my first book Forgotten New York which came out in 2006. I’ll show a few of the scenes available for viewing on the south end of the park and the streets nearby. 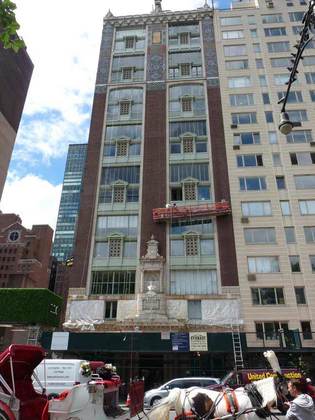 I know about Thomas Gainsborough because of The Kinks. The portrait and landscape painter’s (1727-1788) most famous work is The Blue Boy, rendered in 1770 and thought to be a portrait of Jonathan Buttall, son of a merchant of Gainsborough’s acquaintance, at 18. It was painted in response to a remark by a rival that the color blue is depressing and dark and shouldn’t be employed to a great degree in portraiture. It’s currently exhibited at the Huntington Library in the Los Angeles area.

In the Kinks’ “20th Century Man,” which came out in 1971, Ray Davies decries the state of art and literature he has found himself in in the midst of the century and sings:

I was making my way down Central Park South, dodging tourists, selfie-takers and carriage horses when my eye caught a unique building partially swaddled in construction netting between 7th Ave. and Columbus Circle. It’s a mixed bag, with statuary and, I later learned, interesting entablature on the lower floors, and colorful terra cotta above.

The building is called Gainsborough Studios, and there’s a bust of the painter above the front entrance, complete with a rendering of  an easel with paints and paintbrushes, and pigeon spikes on Tom G’s shoulders, flanked by Corinthian columns and a shell motif in the rear.

The Gainsborough Studios was built at #222 Central Park South in 1908 specifically for artists and painters to reside in, in reaction to a dearth of space in Manhattan that had a large amount of northern light. A group of established artists named the Gainsborough Corporation funded the project and purchased a mansion at #222 which was demolished and the new studios built in its stead.

Hidden behind the netting on the first floor is a frieze on both sides of the entrance by Isidore Konti showing a procession of people paying homage to an altar of the arts. The building attracted many well-known artists as residents in the early to mid-20th century, and other luminaries such as bandleader Artie Shaw lived there as well. 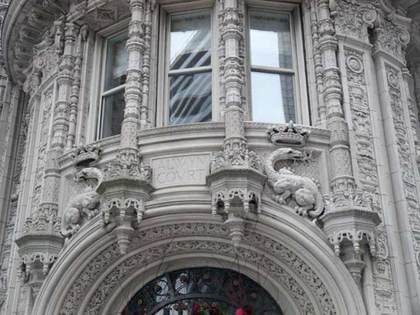 Alwyn Court is a massive, French Renaissance-style building at 7th Ave. and W. 58th St. constructed in the first decade of the 20th century, that at first consisted of several huge apartments built for “country folk who live in the city.” It suffered a devastating fire shortly after it opened, and in the 1930s its large dwellings were subdivided into smaller apartments. The magnificent terra cotta work, fired by Atlantic Terra Cotta, a former plant in Tottenville, Staten Island, remains for the most part.

I was struck by what appear to be fire-breathing dragons above the front door. These are stylized representations of salamanders. Real ones are small- to mid-sized amphibians which resemble lizards but are soft to the touch and spend some of their time in the water, like their amphibian cousins the frogs. In the medieval period, salamanders got the reputation of being able to survive fire and it was believed that they had the ability to extinguish fire. They became heavily represented on royal crests and other ornamentation, and Alwyn Court terra cotta carvers took license with the creatures, giving them claws and showing fire coming out of their mouths. 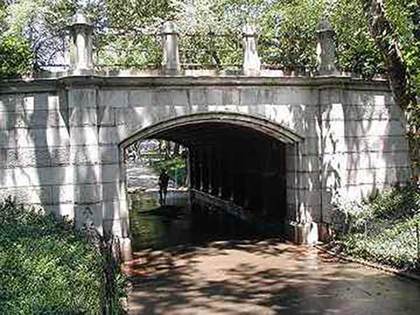 Dipway Arch, built in 1862 and designed by 1862 by Calvert Vaux and Jacob Wrey Mould, takes Central Park’s Center Drive over a park path leading to Artisan’s Gate at 7th Ave. It’s important in that it allowed pedestrians to bypass Center Drive, which until recently was busy with cars during the week. It has a distinctive two-tone bluish color that’s offset by its red brick underpass. Its original cast-iron railings are intact. Like many Central Park arches, the underpass gets waterlogged after a rain. The underpass used to have benches, but those are long gone. A cast iron bridge, Spur Rock Arch, was formerly along the path directly through Driprock, but it was destroyed by Robert Moses in 1938 so Heckscher Playground could be expanded.

In an age when architects made their creations as ornate and conspicuous as possible, Olmsted and Vaux made sure their Central Park bridges and arches were treasures to be sought out and savored once they were found. They always seem to be around a bend or hidden behind the trees—until the moment when you stumble on them, and then you’re rewarded with some of the most unostentatious yet subtly magnificent views the park has to offer.

The bridges and arches of Central Park fall into two classes: bridges made from brick, stone or rock, and cast iron bridges. Calvert Vaux did the bulk of the bridge designs, with assistance from architect Jacob Wrey Mould on the cast iron bridges, which are the oldest in America. 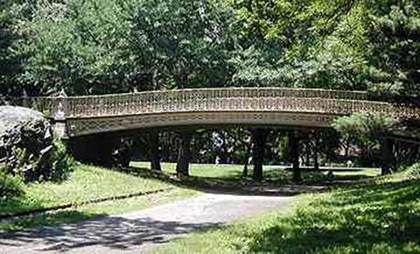 Pine Bank Arch takes a park path over bridle path near Heckscher Playground. It was built in 1861 by J.B. and W.W. Cornell Ironworks of cast iron, steel and wood. One of Central Park’s few remaining cast iron bridges, Pine Bank Arch (its official name, though it’s more properly a bridge) was in dire straits by 1984, so rusty it was about to crumble. That’s when a costly and painstaking restoration was mounted. Fallen parts had to be fabricated, old paint and rust had to be scraped off and the old concrete deck replaced with a wooden walkway. The result is one of Central Park’s true drawing cards, if you’re an ornamental bridge fan. 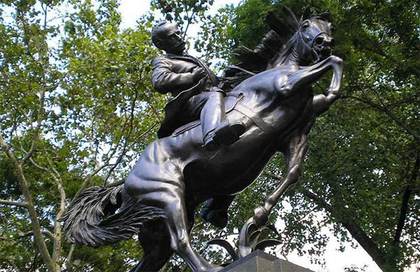 General Jose Julian Marti was a journalist and political activist who worked for Cuba’s independence from Spain and freedom from domination by the USA. He founded the Cuban Revolutionary Party. Assisting in the Cuban revolution in 1895, he was killed and his statue, sculpted by Anna Huntington, depicts him at the moment of his death. “Guantanamera,” a popular folksong in the 1960s, was based on his poetry. The sculpture is by Anna Hyatt Huntington, who also rendered the Joan of Arc statue in Riverside Park. The work was completed in 1959, though anti-Cuban sentiment during the Cold War prevented its installation here until 1965.

It’s one of  a trio of historic sculptures of South American liberators at the north end of the Avenue of the Americas at Central Park South, joining Simon Bolivar, who led the way in the liberation of Bolivia, Panama, Colombia, Ecuador, Peru, and Venezuela from Spain, and General Jose de San Martin of Argentina. Renderings of other South American leaders can be found along the avenue as well, and just a few lamppost “medallions” of members of the Organization of American States installed in the early-1960s.