I’m Stalking My Cousin for Fun 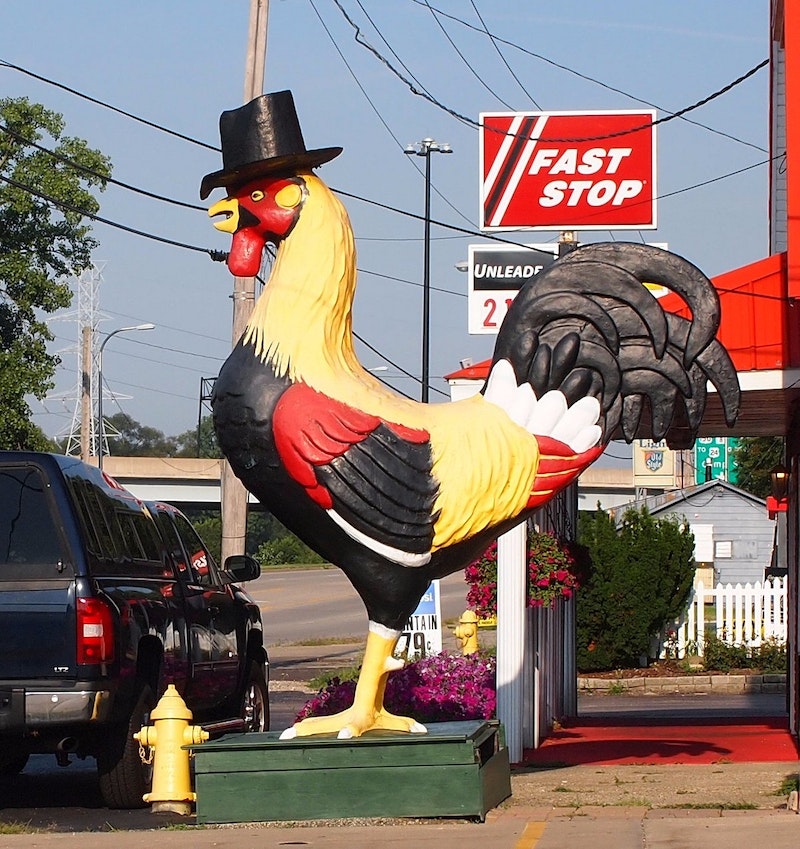 Unacquainted with the more devious and perverse habits of my cousin Rooster, I took it upon myself one evening last night to spy on him. I used binoculars to look into his room, and what did I see? Nothing: his door is made of wood and he’s covered up the keyhole. Nevertheless, I persisted: during his rare trips “into town” (what town? The off ramp with the Dunkin’ Donuts?), I followed him, or had him followed my new friend Colby (a frog, and a prince). For the first few days he really appeared to “just go into town,” idling outside the Dunkin’ Donuts with his coffee, cigarette, and bag of Boston creams. He never shared. Not once.

It’s hard for me to stay still for extended periods of time (I’m diagnosed), so the first few stakeouts weren’t successful. They were mostly sad: what was my cousin doing in the early afternoon? Did he really loathe being around his wife Monica as much as I did? I hoped so. He was chain-smoking was looked like Camel Crushes—he’s mocked me and some of my “subway friends” for even considering smoking menthols. Class distinctions are apparently important to this Protestant (is he?) bird. What’s his freaking problem? He could at least consider me an equal now that I’ve written five pages of my first novel. We’re peers now. Doesn’t he see that?

Friday was the day he met Colby (a frog, and a rat). They made eyes in the parking lot and went over to talk to each other. Rooster looked over his shoulder and then back to Colby, they shook hands, and walked quickly away from each other. Rooster was using again, Rooster wasn’t clean. This was something I could use. But why? I hadn’t seen him nodding out in ages. Was it a maintenance habit? A favor for a friend? Rooster has too many enemies for someone so reclusive, though I suppose that’s why he prefers to stay inside and know exactly what he’s going to be doing every day of his life. Just last year, we had a guy come to the cabin with a gun, but we were all able to subdue (spur-claw) him into submission (death). There was no follow-up on that call.

I had to approach him now. Using in the cabin was a no-go, and in that moment I felt no urge to “go in” and start using again. He was shaking as I accosted him; Colby heard us and turned around, but kept walking. “What’s your freaking problem, Rooster?” He was foaming at the beak: “What’s YOUR FUCKING PROBLEM, BENNINGTON!” I told him he can’t be high in the house, it’s not okay, it’s not right to you or me or Monica. He looked at me like I was crazy, and I probably was: to a hardcore narcotics addict, like Rooster, everyone looks like a vampire. It’s in their blood; maybe they’re even born with it. Not me, though—I’m built different.

The disappointment begins here. “Colby sells me heart medication. I go to someone else for Monica’s… female trouble.” I didn’t know what to say, and after that, neither did Rooster. So we walked for a bit, and we cried, and we drove home together. When we got out, he patted me on the back with his wing and said, “Thank you for caring about me.” He went back inside and got ready for bed with Monica.

Nothing fun ever happens to me anymore. Everything is so simple and nice and boring now. I must cause chaos.