In every motel room, there’s music in the air conditioner. 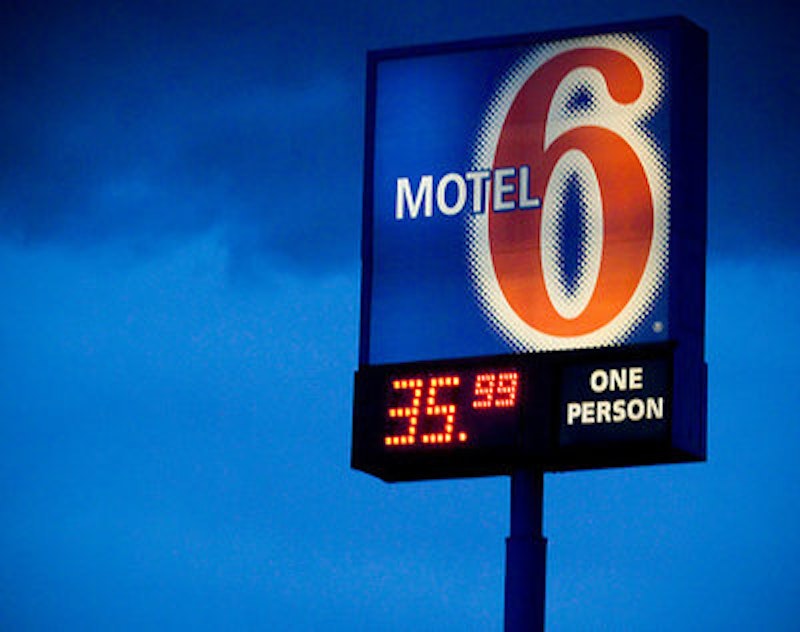 I’m stoned and drunk in a Motel 6 outside of Savannah, Georgia, on Route 95, headed South. I spent last night in an excellent room at South of the Border, just outside of Dillon, North Carolina. The night before that, I barely slept in a noisy, filthy room in a Super 8 in Fredericksburg, Virginia. There’s a liquor store and a Waffle House here, both an easy and relatively risk-free walk from my room on the ground floor, which is an interesting positioning for a smoking room. They’re usually on the top floor. The ground floor rooms in this particular Motel 6 are of the new faux-hardwood floor design, fielded to tranquilize whatever anxieties the modern motel customer might harbor as regards bedbugs and other Gigeresque biological nightmares. The removal of carpeting is the greatest innovation in motel ecology since air conditioning. In every motel room, the carpet harbors traces of every unspeakably fetid being that ever dwelt there, however briefly. Wall-to-wall carpeting is an unmitigated sensory horror.

In every motel room, there’s music in the air conditioner. Most of the time it’s Steve Reich or Philip Glass, maybe Eno, but sometimes you get Slayer, Lamb of God, or Jeff Beck. In the really run-down dives near the Jersey Shore, the air conditioners gave you early Test Dept. or Throbbing Gristle. It’s all very David Cronenberg, J.G. Ballard, David Lynch, and always Bill Burroughs, especially the Nova Mob and the Nova Cops. Everything’s gone nova here, even the weather. It was 99 degrees in Dillon at five p.m. yesterday. It’s been consistently above 95 throughout this trip. It can get as hot as it wants. I’m grateful for the lack of rain. I hate driving in the rain.

I drive a white Ford Crown Vic P71. Its previous owner was the Sonoma County Sheriff’s Department in California. They retired it at 125,000 miles in 2009. I bought it for $2,000. There’s a whole cult around the P71: dedicated online forums and Facebook pages. It’s like automotive Satanism, viral and independent. Ford stopped making them in 2011. It’s a true beast of a car, slow to accelerate but tremendously powerful and just generally solid. Any two-toothed mechanic from Bumfuck, West Virginia can fix it, in a pinch. In a collision, it’ll blow most of what I see on the road to bits. It’s low, broad, and heavy.

I’m interspersing my motel room Weather Channel wallpaper with dips into the likes of CNN and Fox News. When did the Three Stooges take over? Did I drop acid recently, like in the last two hours or so? Donald Trump is very likely going to win the Republican nomination, barring some typical Bush Crime Family shenanigans like shooting himself in the head twice, overdosing, single-car accident, auto-erotic asphyxiation, small plane crash, lone nut with a gun, caught in bed with a dead girl or a live boy: we all know the drill. Bernie Sanders is snatching the rank-and-file labor vote from under that ghastly woman, and the best the Clinton Machine can come up with to divide his supporters is attempting to portray Sanders as favorable towards Israel. Good luck with that shit. I’m pretty certain that having outlived Vincent Bugliosi, Charles Manson is getting ready to let go and die. I hope he knows how grateful I am for him keeping me out of Vietnam.

I like the idea of Sanders versus Trump in 2016. It’s a clear choice: it’s the president we need against the president we deserve. As much as I admire Sanders, I’ve got to say that I wish that William Shatner had been born in America, because Shatner versus Trump is really what I’d expect to see on a whole lot of acid, in a cheap motel, somewhere outside of Savannah, hearing Philip Glass in the air conditioner.